Various methods of contraception are available. Each method has its own merits and demerits but the essence of any method is good instructions to the patient and meticulous follow up. Here we present a case of a patient who had a Multiload inserted following 2 cesarean sections. It perforated into the abdominal cavity and was detected at term during her third pregnancy. Omentum had encased it and formed a sterile abscess. It was removed during her third cesarean section.

Intrauterine devices are in top most tier of WHO classification as the most effective method of contraception with the failure rates on perfect and typical use being comparable to permanent methods of sterilization.[1] One time out patient visit is needed for their insertion with their contraceptive benefits for periods ranging from 3 to 10 years. However, these devices do come with their share of complications and one needs quick diagnosis and prompt management of the same.[2]

A 25 year old gravida 4, para 2, living 2, medical termination of pregnancy (MTP) 1, at 36 weeks of gestation with previous 2 cesarean sections (LSCS) was referred to our hospital in view of previous 2 LSCS with ultrasonography (USG) suggestive of possibly morbid adherent placenta with an intrauterine contraceptive device, partly in the uterus and partly outside. She had thalassemia trait. Her hemoglobin was 8.1 gm/dl.
Her first LSCS was done for nonprogress of labor and the second was done for previous LSCS. Three months post delivery she had an interval, post menstrual IUCD inserted  in a private hospital. Vaginal palpation of the thread of the IUCD post insertion was not taught to her. She was not instructed regarding follow up nor was she called for any specific follow-up. On redirect questioning she confirmed that the insertion was painful. Post insertion she had menses for one cycle. In the next cycle she conceived and desired an MTP. At the time of the MTP that was done in a private hospital, the IUCD thread was not seen, felt or found on vaginal examination, USG or with the products of conception post procedure. She was told that she must have expelled the IUCD unknowingly. Radiographic examination of the entire abdomen was not performed. No further investigations were done to locate the missing device. She was started on oral contraceptive pills (OC) for contraception. Three years later she stopped OC pills and conceived spontaneously.

In the present pregnancy she was registered in first trimester and had 4-5 ANC visits. USG was done in first and second trimester with no mention about the IUCD. On routine USG in third trimester, the missing IUCD was reported as being partly in the uterus and partly outside along with a morbidly adherent placenta. She was admitted and a USG was done of the abdomen and pelvis for the IUCD which was suggestive of a 2.8 cm hyperechoic lesion surrounded by a 3 cm collection in the sub hepatic region suggestive of the IUCD. MRI pelvis was done and showed a foreign body with a peripherally loculated fluid collection in the subhepatic recess which could be an IUCD. On discussion with the radiologists, it was concluded that the device was not embedded in the uterus but was in the subhepatic region. No evidence of placenta accreta/percreta was noted. All serological and biochemical investigations were normal. After one packed cell transfusion she was scheduled for elective LSCS with tubal ligation and IUCD removal.
Under antibiotic cover, LSCS was done by a midline vertical incision. No adhesions or advancement of bladder was seen. LSCS was done uneventfully. She delivered a healthy, 2.4 kg female baby. Uterus, cervix and fallopian tubes did not show any area suggestive of old healed scar of perforation. On bimanual palpation of the uterus with one hand in the cavity and one on the surface of the uterus, no localized area of thinning or scar of suspected perforation site was felt. Uterine incision was closed. Bilateral tubal ligation was done. The subhepatic region was explored carefully and a localized thickening of the omentum with IUCD thread was seen. The thickened part of the omentum was excised and ligated (figure 1). Rest of the procedure was uneventful.
The excised omentum was opened and a Multiload was found encased in a collection of pus. The whole pus filled cavity was completely sealed off in the omentum forming an omental abscess. Pus was sent for culture and sensitivity which showed no organisms (figure 2 and 3). Her postoperative course was normal. 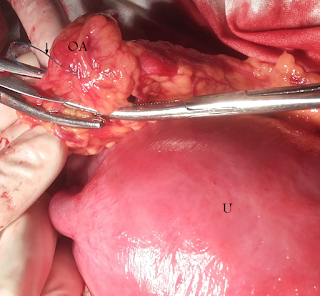 Figure 1. Excision of the omental abscess (OA) along with the encased IUCD (thread seen marked by the arrow). U is the uterus 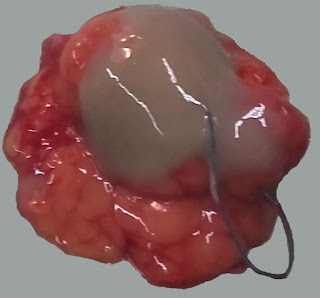 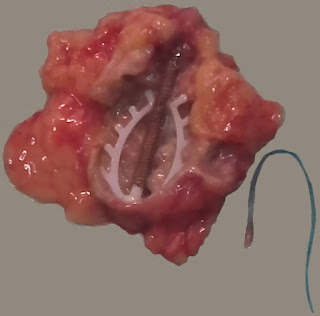 Figure 3. Cut section of the omental abscess with the encased multiload IUCD. The threads of the IUCD are seen separate from the IUCD.

The common complications of IUCD’s are expulsion, perforation, infections, irregular bleeding and failure of the device resulting in pregnancy even with the device in situ.[1]
In our case, user was not taught to check the thread after insertion. In a properly counseled user, a missing thread is the first sign of something amiss. Sometimes the thread can just be curled up in the cervix and diagnosed on probing with a brush or artery forceps but it can also mean expulsion or perforation. In such cases, USG would aid the diagnosis. The protocol for a missing IUCD was not followed in our patient.[3]
She subsequently conceived and was seen by a doctor for medical termination of that pregnancy. Expulsion of the device was just assumed and the ACOG recommended algorithmic approach for the management of lost IUCD was not followed to locate the device.[3] In the present pregnancy, the patient had 2 USG examinations done but since they were done in early pregnancy; they could not pick up the IUCD as they scanned the pelvic region only. Subsequently as the pregnancy advanced, the USG done in the third trimester scanned the upper part of the abdominal cavity and hence detected it, located in the sub-hepatic region. MRI whole abdomen confirmed the diagnosis of copper IUCD being outside the uterine cavity.
A painful insertion in a lactating and post partum woman had mostly led to a perforation during insertion of the device. Besides, failure of the contraceptive method she remained asymptomatic and the perforation remained silent for nearly 3 years as the omentum, so rightly labeled as the policeman of the abdomen, caught this foreign body and kept it safely away, from causing any complications till we accidentally discovered it. Fortunately, the site of uterine perforation did not compromise the integrity of the uterine wall. She underwent an MTP and a term pregnancy after this perforation without the perforation site giving way.
Perforation by an IUCD and its migration into the peritoneum is a known complication and occurs in 1/1000 insertions.[2] Usually painful insertion and missing thread are the first signs.[4] The precipitating factors for perforation are insertion in the post partum status and or a lactating mother.[4] Perforation of the uterus by an IUCD can be either primary( at the time of insertion) or secondary( due to contractions).[5] Perforation can also be classified as partial or complete. Partial is when the IUCD remains either within the cavity or the myometrium (Type 1 and 2) and complete is when the IUCD is in the peritoneal cavity (Type 3).[6] A type 3 perforated IUCD can intrude into the surrounding organs including the bladder, small intestine, sigmoid colon or the omentum.[7-9] This migration can either be completely asymptomatic (as in our case) or can cause range of symptoms right from abdominal pain, gastro-intestinal  bleeding, intestinal or ureteric obstruction and even bladder stones.[11,12] Massive hemoperitoneum on attempted removal of a perforated Cu-T has also been reported.[9] The copper in the Cu-T, is known to cause a tissue reaction resulting in dense adhesions and chemical peritonitis that was prevented in our case due to encasement of the device by the omentum.
The definitive management of such a perforated device is either open or laparoscopic removal.[9,13] But all studies and reports indicate that prompt removal of the device is a must upon detection.