Intrauterine retention of fetal bones is a rare complication these days due to availability of good quality medicines for termination of pregnancy. But still there are areas in India where the procedures like aspirotomy or dilatation and evacuation is being tried for termination of pregnancy in advanced gestational age (12 to 20 weeks). There is a very high possibility of missing some bony fragments of the fetus inside the uterine cavity during this procedure. Such retained fragments can lead to formation of intrauterine adhesions, hypomenorrhea, pelvic inflammatory disease (PID), that in turn can lead to fertility issues like infertility. We present one such case managed at our center where patient presented for secondary infertility. Severe Asherman’s syndrome as well as retained fetal bony fragments were detected on evaluation. Surgical correction of these problems eventually corrected infertility.

Retention of fetal bones inside the uterine cavity during medical termination of pregnancy, although a rare event to occur, can sometimes pose serious fertility concerns to the patient in question. The event goes unrecognized in most of the cases as patients do not exhibit any symptoms in the immediate postoperative period. Later on after few years many of these patients present with various complains like dysmenorrhea, chronic pelvic pain, and hypomenorrhea and sometimes with an inability to conceive. Infertility is one of the most unfortunate consequences of retained fetal bones. Proposed etiopathogenesis of infertility in such cases is either development of asherman’s syndrome as a reaction to retained bones [1] or the bones themselves acts like intrauterine contraceptive devises to prevent pregnancy.[1,2]

A 32 year old woman P1L1A1 presented with secondary infertility since 6 years. She was  anxious to conceive and had scanty menses with severe dysmenorrhea since the last 2 to 3 years. In her obstetric history, she underwent an LSCS 10 years back. She underwent a medical termination of pregnancy (MTP) in her second pregnancy at 14 to 16 weeks of gestation for anencephaly 6 years back. Detail medical record of the procedure adopted for MTP were not available with her but as per history given by her a dilatation and evacuation was done to terminate pregnancy at some hospital in rural area of Jalgaon district In her menstrual history she has a regular 28 day cycle but bleeds scantily for 2 days and menstruation is painful. Her last menstrual period was 5 days prior to presentation.She gave history of 3 failed attempts for conception after ovulation induction and planned relations despite of documented ovulation on follicular study. Her past medical history was insignificant. On clinical examination her general and systemic examinations were normal. On local examination her abdomen was soft. On speculum examination cervix and vagina were healthy. On bimanual vaginal examination uterus was anteverted, normal in size, and adnexa was free.

Her serological, biochemical and day 3 hormonal profile were within normal range, Ultrasound (USG) of the pelvis showed thick calcified endometrium. Her husbands semen analysis was normal. A consent for diagnostic and if required operative hysterolaparoscopy to evaluate for the causes of secondary infertility was obtained from her and her husband. On hysteroscopic examination, impacted multiple bony fragments were detected in the endocervical canal and endometrial cavity.[Figure 1,2] Endometrial cavity was found to be obliterated with severe adhesions leading to asherman’s syndrome. [Figure 3] All bony fragments were removed with the help of hysteroscopic grasper’s [Figure 4, 5]] and adhesiolysis was done with hysteroscopic scissors. Laparoscopy that was done at the same time revealed normal findings with free spillage of dye from both fallopian tubes. Intrauterine Foleys’ catheter was kept for 5 days and she was started on estrogen supplementation for endometrial regeneration. As the hysteroscopically retrieved pieces of bones were grossly looking like fetal bones the histopathological confirmation was not done . She was advised to wait for spontaneous conception for at least 6 months and it was planned to start treatment in case she failed to conceive in 6 month period. She reported with a positive urine pregnancy test (UPT) in the 4th month following hysterolaparoscopy. 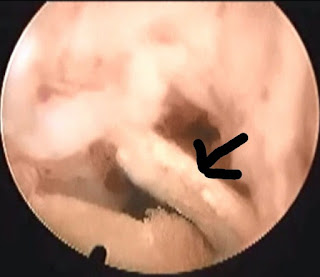 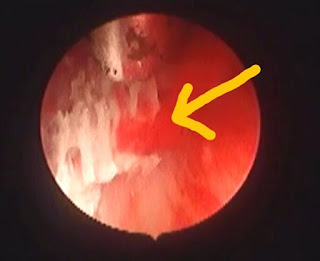 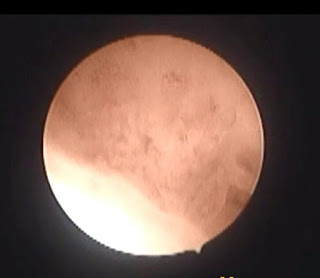 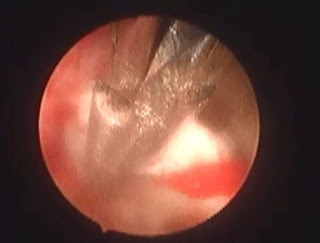 Uterine and tubal factors are known to be the leading causes of infertility across the world especially more so in developing countries. Abortion has been known to be associated with future fertility problems in few cases. The proposed mechanism is likely to be result of damage to the fallopian tubes from infections or sometimes as a result of damage to the endometrial lining resulting in endometrial adhesions or synechiae formation leading to development of asherman's syndrome.[1]  One of the significant, although rare cause of uterine factor of infertility is retention of fetal bones left during a previous mid-trimester dilatation and evacuation. Besides secondary infertility, retained fetal bones may also present with irregular vaginal bleeding, dysmenorrhea, dyspareunia and chronic pelvic pain. It has been postulated that the fetal bones that are left behind in the uterine cavity following medical termination of pregnancy acts like an intrauterine contraceptive device (IUCD).[1,2] Sometimes they may also act like an adhesiogenic factor leading to development of intrauterine adhesions which in turn lead to secondary infertility. The exact incidence of retained intrauterine fetal bones is unknown. Most of the times it’s an incidental finding during routine hysteroscopic evaluation in a case of secondary infertility. A high index of suspicion is needed for the preoperative diagnosis to be made. Imaging modalities like 4 dimensional ultrasound, hysterosalphingography ( HSG) and hysteroscopy may make the diagnosis fairly simple. Filling defects on HSG may sometime give an indication of possibility of the diagnosis of this condition as a differential diagnosis to asherman’s syndrome. Simple removal of the retained  intrauterine fetal bones under hysteroscopic guidance is the gold standard for treatment of this condition.[2] Success rate in terms of resumption of normal fertility and the resolution of other symptoms can be very high as reported in majority of the studies.[1,2,3,4]