The female genital tract develops from müllerian ducts that forms the fallopian tube, uterus, cervix and the upper two-thirds of the vagina. Usual growth of the müllerian ducts is determined on the completion of three stages that is organogenesis, fusion and septal resorption. Fusion is characterized by joining of the ducts to form the uterus and its lack  leads in the development of a bicornuate or didelphys uterus. Renal anomalies occur in 29% of mullerian duct anomalies and are more commonly associated with unicornuate uteri than with other mullerian duct anomalies. Renal agenesis is the usually reported anomaly. Additional anomalies refer to the occurrence of an ectopic kidney, horseshoe kidney and renal dysplasia .

Mullerian duct anomalies (MDA) are uncommon but can be a treatable form of infertility. They are known to have higher incidences of infertility, repeated first trimester spontaneous abortions, fetal intra-uterine growth retardation, fetal malposition, preterm labor and retained placenta. The particular role of imaging is to discover and classify these MDA so that suitable treatment is undertaken. The group involving arcuate uterus is characterized by mild indentation of the endometrium at the uterine fundus. It is the outcome of a near total resorption of the uterovaginal septum. There is no difference in clinical pregnancy rate between women with arcuate uteri and women with a normal uterus. Meta analysis of congenital anomalies and its effect on reproduction showed that arcuate uterus was associated with second trimester miscarriage and increased rate of fetal malpresentation at delivery.[1,2] We present a case of arcuate uterus with breech presentation and ectopic kidney with a successful outcome of pregnancy.

A 22 year old, primigravida at 34 weeks of gestation was referred from a private hospital with ultrasound suggestive of uterine anomaly;  most likely a subseptate uterus and an ectopic right kidney. She was admitted in ward for safe confinement and evaluation of the ectopic kidney. Ultrasonography was done from our hospital. It reported the presence of the right kidney measuring 9.5x4.5 cm in the right iliac fossa in the rectouterine pouch with normal echogenicity and corticomedullary differentiation.  Left kidney was 11.7x5.6 cm with anterioposterior dimension of the renal pelvis measuring 1.8 cm indicating mild hydronephrosis and hydroureter. Bladder was normally distended. Obstetric ultrasonography (USG) reported a single live intrauterine gestation of 34 weeks 6 days with breech presentation and effective fetal weight of 2209 grams, amniotic fluid index adequate, placenta in posterior position and S/D ratio of 1.96.
Urology reference was sort for and urine routine with culture and ultrasound was performed to rule out hydroureter and hydronephrosis. Urine routine was normal and urine culture showed no growth. Fitness for lower segment cesarean section was obtained from the nephrologist. At 37 weeks of gestation she complained of vaginal leaking.  Cervical Os  was 2.5 cm dilated, 60% effaced,  station was high, amniotic  membrane were absent, liquor was clear and litmus test was positive. It was a breech presentation. It was decided to deliver her by an emergency lower segment cesarean section. A Healthy male baby of 2.75 kg with 1 minute APGAR score of 9/10 was delivered. Intra operative findings confirmed the arcuate uterus with right kidney in the rectouterine pouch. 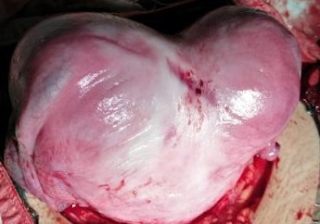 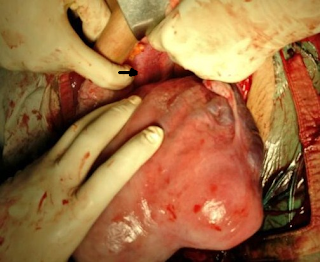 The female reproductive tract develops from a pair of müllerian ducts . Defect in the stage of septal resorption  results in subseptate or arcuate uterus.[2] Mullerian anomaly is associated with high chances of infertility and poor pregnancy outcome. The most widely accepted method of categorizing mullerian duct anomalies is the American Fertility Society (AFS) classification (1988). This system organizes mullerian anomalies according to the major uterine anatomic defect and allows for standardized reporting methods. The AFS classification system is based on the clinically useful scheme of Buttram and Gibbons, which combined the degree of developmental failure and its clinical manifestations.[3] Our case falls in the 6th class as it is an arcuate uterus. Interestingly in our case we had an ectopic right kidney with a normally located left kidney.
The mesonephric ducts connect with the urogenital sinus but by the 5th week of fetal life the ureteric buds appear on either side of the müllerian tubercle and the metanephrogenic mass of cells (the future kidney) appears. At the same time the primordial germ cells are migrating from the hindgut to form the primitive gonads along the urogenital ridge. The kidneys develop in the pelvis and begin as a metanephrogenic mass of intermediate mesoderm around the ureteric bud. As the kidneys develop they migrate toward the head of the embryo. This is chiefly the result of the growth of the embryo caudal to the kidneys.
An ectopic kidney is a birth anomaly in which a kidney is situated below, above, or on the opposite side of its regular place. An ectopic kidney may be asymptomatic and may function normally. It may be detected incidentally on USG, CT or MRI.  Possible complications of an ectopic kidney includes problems with urine drainage from that kidney. Abnormal urine flow can lead to difficulties like infection, stones and kidney damage.
Ectopic kidney may obstruct labor but unexpected degree of mobility permits them to be moved into the lower portion of the abdomen and allows normal vaginal delivery.[4] Ectopic kidney is more likely to suffer from certain complications than a normally located kidney.[4] Pelvic kidneys are more likely to get injured because they are unprotected by thoracic ribs and situated in a more anterior position.[4] Always consider a renal malformation in a differential diagnosis of a “pelvic mass.”[4]

No treatment for an ectopic kidney is needed if urinary function is normal and no blockage of the urinary tract is present. Surgery or alternative treatment may be required if there is
blockage, reflux, or extensive damage to the kidney. During gynecological surgery precautions should be taken to avoid iatrogenic injury to the ectopic kidney.