A syndrome complex consisting of didelphys uterus, obstructed hemivagina and ipsilateral renal agenesis is one of the most complex and rare congenital anomaly of the female urogenital system. In most of the cases patients remain asymptomatic till puberty only to present with dysmenorrhea, pelvic pain, inter menstrual bleeding and or abdominal cramps in the period following menarche. We present one of the atypical, delayed presentation of this syndrome who was diagnosed at 26 years of age because of dysmenorrhea and irregular vaginal bleeding. Appropriate combination of imaging, clinical examination and hysteroscopic evaluation confirmed the diagnosis that was followed by appropriate surgical correction to relieve her of her complaints .

Herlyn Werner Wunderlich syndrome also known as OHVIRA (Obstructed Hemivagina, Ipsilateral Renal Agenesis) syndrome is typically found to be associated with uterine didelphys but sometimes it has been encountered in association with septate uterus.[1] Most patients present after menarche with severe dysmenorrhea due to outflow tract obstruction.

A 26 year old, unmarried female presented in the out patient department with complaints of severe dysmenorrhea, pain in abdomen since 6 to 7 years along with complaints of inter menstrual bleeding not responding to multiple attempts of hormonal treatment attempted by the primary general practitioner. She gave history of foul smelling vaginal discharge since last 2 months. There was no history of fever and burning micturition. She was sexually active since last 2 years. There were no coital complaints. Her menstrual history consisted of heavy menstrual flow for 7 days, every 30 days and it was associated with dysmenorrhea. Proper menstruation was followed by inter menstrual bleeding of altered brownish color almost daily throughout the month since the last 6 to 7 years. Ultrasonography (USG) features were suggestive of bicornuate uterus with minimal hematometra on the right side (Figure 1) with absent right kidney. (Figure 2). She gave history of undergoing hystero-laparoscopy at another center 18 months ago to evaluate her problem. It confirmed the presence of a bicornuate uterus. There was no evidence of endometriosis on laparoscopy. Right uterine horn could not be negotiated during last hysteroscopic attempt but there was discharge of hematometra collection from a small fistulous opening in the vaginal wall. Dilatation of fistulous opening was attempted during last surgery as mentioned in the operative notes.
Her general clinical examination was unremarkable. Per speculum examination revealed a bulge in the right anterolateral vaginal wall. Purulent discharge was noted from a fistulous opening in the vaginal wall bulge on pressing the bulge. (Figure 3). Cervix was more clearly seen on the left side and it was normal looking. On this clinical evaluation a clinical diagnosis of Herlyn Werner Wonderlich syndrome was made and she was posted for hysteroscopic confirmation of the diagnosis followed by surgical correction.
Intraoperatively on vaginoscopic examination the findings of per speculum examinations were confirmed. Since pus discharge was noted on clinical examination, low pressure hysteroscopy was planned under higher antibiotic cover to prevent the entry of purulent material into the peritoneal cavity and subsequent development of pyo peritoneum. Left sided cervix could be negotiated with the hysteroscope and a banana shaped left hemiuterine cavity with centrally placed ostium was noted. Hysteroscope was withdrawn and pushed through a small fistulous opening on the bulging right anterolateral vaginal wall. Hysteroscope entered into a blind vaginal pouch with pus collection. Right sided cervix was  located inside the vaginal pouch and on negotiating the cervix right hemiuterine cavity could be visualized hysteroscopically. Uterine cavity was also draining purulent material. This confirmed the suspected diagnosis of Herlyn Wurner Wonderlich syndrome. The oblique obstructing vaginal septum was excised. (Figure 4) The excised edges were marsupialized with the vaginal wall to relieve the obstruction as well as to prevent reocclusion of the outflow track. After complete excision of the septum, two distinct cervices could be visualized clearly and confirmed by passage of hegar’s dilator in the cervix. (Figure 5) Final picture after completion of excision as well as marsupialization resulted in formation of a single vagina with two cervices sharing a common medial wall. (Figure 6) Postoperative course was uneventful. She reported complete cure of her symptoms on 2 month followup postoperative visit. 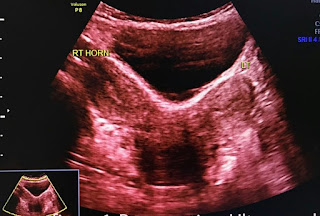 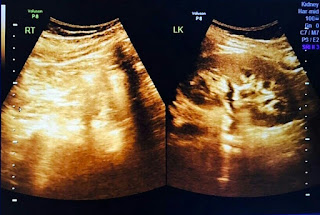 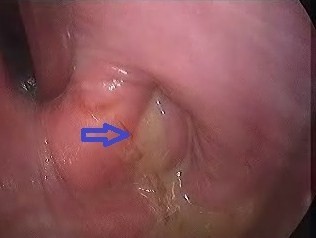 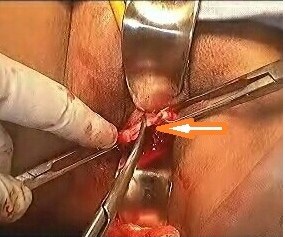 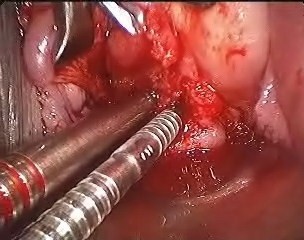 Figure 5. Passage of dilators through both cervices sharing common medial wall amongest them 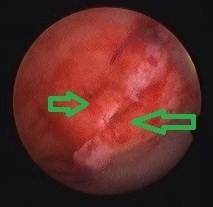 Herlyn Werner Wunderlich syndrome is included in class III of American Fertility Society (AFS) classification, as well as class U3C2V2 of mullerian anomaly according to European Society of Human Reproduction and Embryology (ESHRE) classification of mullerian anomalies. Overall incidence of this condition is very rare and is found to be seen in 0.1-3.8 % as reported by various case series reports across the world.[1] Ipsilateral renal agenesis on the side of obstructed hemivagina is the most commonly encountered renal anomaly in OHVIRA syndrome, although few other malformations, like renal duplication and multicystic dysplastic kidney, have also been reported in some papers.[2, 3] Acien proposed that while uterus and cervix were derived from fused-paired paramesonephric ducts (2nd part) and divergent distal paramesonephric ducts (3rd part), the vagina development is completely mesonephric in origin.[4] Hence, paramesonephric ducts don’t have any role in the embryonic development of the vagina but mullerian tubercle plays a role in the formation of vagina because it has been found that the cells in the vaginal lining have originated from the mullerian tubercle.
Development of metanephric diverticulum from mesonephric duct with normally occurs around 5 weeks of pregnancy fails due to some unknown mechanism and because of that the ureteric bud doesn’t develop leading to renal and ureteric agenesis on the side of the blind vagina. Anatomical defect is created because of failed lateral fusion of mullerian ducts (didelphys/ septate uterus and double vagina) in combination with complete or partial failure of longitudinal fusion between the mullerian duct and the urogenital sinus (hemivaginal septum) on the side of the renal agenesis. In a reported case series of 27 cases, the age at diagnosis varied from 10 to 29 years, with a median age of 14 years.[3] Earliest reported case in the literature is one day old neonate at birth.[7] Defective development of both the  mullerian and wolfian ducts has been proposed as one of the theory in development of this malformation.[5]
Patients complaints of dysmenorrhea or recurrent painful menses that occurs due to the outflow tract obstruction and pressure generated by the increasing distension of the obstructed hemivagina. Early and accurate diagnosis of this clinical entity is crucial because prompt surgical correction can relieve symptoms and prevent further complications related to chronic obstructive hematocolpos (such as endometriosis and pelvic adhesions), and maintain reproductive capacity. Delays in diagnosis were usually attributed to lack of knowledge of this clinical entity, occurrence of regular menstruations because of an incomplete vaginal outlet obstruction, and slow extension of the hematocolpos. Surgical correction not only relieves pain with immediate effect but also reduces chances of pelvic endometriosis due to retrograde menstruation. In postoperative phase patient is capable of having a normal sexual and reproductive life. In the earlier days hemi hysterectomy was the treatment chosen in many patients. Further addition of knowledge about this condition in the last few years has changed the treatment plans from hemi hysterectomy to a simple excision of the oblique complete vaginal septum relieving the obstruction.

Herlyn Wurner Wunderlich syndrome is a one of the rare forms of complex congenital female urogenital malformation. It does exhibit a wide range of clinical manifestations. Prompt diagnosis with appropriate surgical management is the key to a good outcome. Diagnosis is often missed clinically but investigations like MRI scan can identify the condition very easily.[6] Very high index of suspicion on part of the treating clinician is required to pick up this clinical condition either on clinical examination or with the help of appropriate investigations. Excision or complete division of the septum with marsupialization of the cut edges of the excised septum corrects the problem. Early and correct diagnosis is required to relieve the symptoms, preserve sexual functions and fertility and prevent complications caused by retrograde menstruation which may result in endometriosis.