The term heterotopic pregnancy describes the presence of two embryos implanted in two different places including the one in the uterine cavity. Timely diagnosis is crucial and is needed to avoid the life threatening complications. Three dimensional ultrasonography has become an important tool in the field of reproductive medicine. It offers the benefits over other techniques in prompt diagnosis of heterotopic and ectopic pregnancies. In this case report we present a heterotopic pregnancy resulted from assisted reproductive technology and its early diagnosis using three dimensional transvaginal ultrasonography (3D-TVS). We could locate the 5 weeks heterotopic pregnancy where one was left ectopic with a gestational sac and yolk sac and the another showed an intrauterine sac. The patient was advised for surgery. She then underwent laparoscopic left salpingectomy with harmonic scalpel and then recovered remarkably.

Heterotopic pregnancy is a condition where implantation of embryos occurs one in the uterine cavity and other in the fallopian tube. Although the frequency of heterotopic pregnancy is less in spontaneous conception, the incidence is quite high with assisted reproductive technology.[1, 2]  Early diagnosis offers benefits over life threatening complications from rupture of ectopic pregnancy. Most of the heterotopic cases are asymptomatic and difficult to identify at early stages. In most heterotopic pregnancies, presence of an intrauterine sac caused the sonographer to overlook the ectopic pregnancy. Hence it is always a diagnostic and therapeutic challenge for a clinician and a sonographer. A through and comprehensive screening is essential, particularly in women undergoing IVF embryo transfer with two or more embryos. Hence in such suspected cases it’s mandatory to search for the second sac even after visualizing the intrauterine sac. Three-dimensional Ultrasonography (3D USG) offers diagnosis of heterotopic pregnancies at early stages. In this case report we present a heterotopic pregnancy resulted from in vitro fertilization and our holistic approach to screen the location of pregnancies using 3D trans-vaginal ultrasonography.

A 37 year old lady with BMI 24, a known case of dextrocardia, consulted our institution with her husband for infertility treatment. She was diagnosed poor ovarian reserve and possible grade 1 endometriosis. The couple was suggested for in vitro fertilization which they underwent subsequently. Two early blast embryos, one at 2AA and another at 2BB stage were transferred under ultrasound guidance to mid cavity, 7 mm from the fundus. Her beta HCG levels after 14 days were initially 499 mIU/ml which increased to 780 mIU/ml after 48 hours, 2690 mIU/ml after 48 hours and 5991 mIU/ml after another 48 hours. Then we performed a 3D trans vaginal ultrasonography (3D TV-USG) to locate the pregnancy. 3D-TV-USG (Voluson TM  E 10, GE Healthcare, Austria. GmbH & Co OG) with endovaginal probe (GE-RIC5-9-D) showed a 5 weeks heterotopic pregnancy where one was left ectopic with a gestational sac and yolk sac and another was an intrauterine sac. A transvaginal grey-scale two-dimensional ultrasound image was obtained (Figure 1) and subsequently three-dimensional volumes were applied. We carefully chose the section of interest to include both the implantation structures. Volume rendering was also performed (Figure-2). She was asymptomatic, however in view of the diagnosis made she was referred to a tertiary care unit for follow-up and management. There she was further diagnosed to be a case of heterotopic pregnancy where one was left sided live ectopic pregnancy and the other was non-viable intrauterine pregnancy. The couple was offered surgical treatment options which they agreed and consented. Laparoscopic left salpingectomy was done. An unruptured 2x2 cm ectopic pregnancy was noted in the left tube. The ovaries and upper abdomen appeared normal. Left salpingectomy was done with harmonic scalpel. The intrauterine non-viable pregnancy aborted spontaneously following week after surgery. Histopathology of the salpingectomy specimen was done. Microscopic examination of the section revealed ruptured fallopian tube with dysmorphic edematous villi with scalloped outlines and with focal trophoblastic proliferation embedded in hemorrhage. Cisterns and nuclear atypia was not observed. After the surgery she recovered remarkably and was again planning for another IVF cycle. 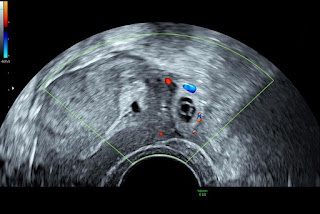 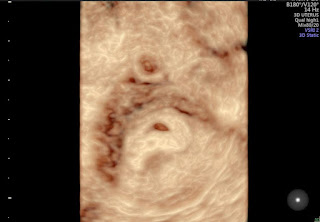 Heterotopic pregnancy is simultaneous gestation in more than one implantation sites that includes one in the uterine cavity whilst another implanted outside of the cavity ectopically. First heterotopic pregnancy was found in 1708 during autopsy.[3] The clinical diagnosis of this condition is crucial. The incidence rate is higher in assisted reproductive technology (ART) particularly after ovulation induction.[4,5] Multiple factors contribute for the heterotopic pregnancy in ART including the hydrostatic forces generated during embryo transfer, previous tubal surgeries and pelvic inflammations.[1,4,6] Prompt evaluation and early diagnosis is demanded to diminish the morbidity and mortality. Transvaginal ultrasonography and magnetic resonance imaging (MRI) would be the current beneficial diagnostic tools to screen the condition. However, MRI being an expensive tool and not readily available in all the centers, ultrasonography offers the benefits over it. Hence, 3D ultrasound is an effective alternative of MRI for its easy availability and better comfortability to the patients. Three dimensional ultrasound and Power Doppler are relatively new technologies and offer benefits over 2D ultrasound. 3D ultrasound enables us to acquire the images in three planes such as coronal, sagittal and frontal therefore accurate configuration of the mass can be mapped out.[7] Evaluating the heterotopic pregnancy from adjoining ovarian pathologies such as corpus luteum and other hematologic cyst which are common in early pregnancies can be easily comprehended with 3D ultrasound. Heterotopic pregnancies are seen occasionally in ART treatments and they may be obscured especially in presence of cysts. In such situations 3D ultrasound can be used to differentiate the heterotopic pregnancy from other adnexal pathologies. In the present case 2D and 3D ultrasonography enabled us to screen the heterotopic pregnancy at early stages and helped us to suggest the possible treatment strategies to the patient, preventing the life threatening complications.