Leiomyoma is a benign smooth muscle tumor. While it can occur in any part of the body, female genital tract is a common place for its occurrence. While uterine leiomyoma is the most commonly encountered entity in common gynecological practice, it can be present in any other tissue. A case of vaginal leiomyoma is described below

A 36 year old married woman, para 2 living 2 presented with something coming out of vagina since one month. She felt a nodule like mass in her private parts, which reportedly increased with micturition. She had no other complaints. She had undergone tubal ligation. She had regular menstrual cycles, and no other medical or surgical co-morbidities. On examination, abdomen was soft and scar of tubal ligation was present. On speculum examination, cervix was torn with no descent and a firm mass of around 2 inch in size was seen prolapsing from the middle part of the posterior vaginal wall on coughing. Rectocele was also present. On per vaginal examination, the uterus was retroverted, parous and the fornices were free, non-tender. The mass was felt fixed to the posterior wall of the vagina, and the entire margin of the mass was felt in the posterior vaginal wall. On rectal examination, mass could not be felt and the rectal mucosa was free. Clinical impression was posterior vaginal fibroma that was confirmed by ultrasonography. Transrectal ultrasonography showed 2.7x1.7 cm posterior vaginal wall solid mass with internal vascularity with preserved plane between the anterior rectal wall and the mass. (Figure 1) Pre-operative investigations were within normal limits. Posterior vaginal wall fibroma excision with posterior colpoperineorraphy was performed. A midline incision was taken from the mucocutaneous junction to a point at the upper limit of the tumor, triangular flaps of vagina were dissected by sharp and blunt dissection (figure 2). The tumor was enucleated by sharp and blunt dissection from the loose recto vaginal fascia. Posterior colpoperineorraphy was completed. Specimen was sent for histopathology (figure 3). Histopathology report was suggestive of bundles of smooth muscle spindle cells suggestive of a benign leiomyoma. She was discharged on 3rd postoperative day. She had no complaints at her follow-up visit after 3 weeks. 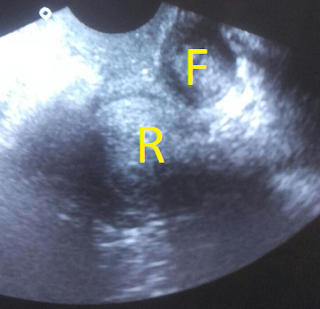 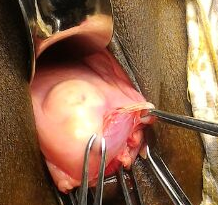 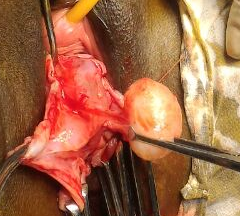 Leiomyomas are common tumors of the uterus and sometimes of the cervix. Rarely they can occur in the round ligament and other rare locations.[1,2] The vaginal location is indeed a rare entity. As recent as 2011, only around 300 cases had been reported in medical literature.[3]
Our patient presented with complaint of a mass prolapsing out of vagina during micturition. Vaginal leiomyomas can present with varied symptoms. The commonly reported problems are vaginal bleeding, dyspareunia, dysuria and urinary obstruction.[4] Though our patient felt a mass, there was no overt uterovaginal prolapse. The mass mimicked the symptom of prolapse in our case. When the mass is big, it may present with prolapse, as described by Gurung et al.[5]  Our patient presented with prolapse symptoms but with a small leiomyoma. However, large masses causing contiguous spread and presenting as fistulae necessitating abdomino-perineal approach have also been described.[6]
Pelvic ultrasonography in our patient did not show any other significant leiomyoma in other locations. However, simultaneous presence in multiple areas is well documented.[7] When urinary complaints predominate, intravenous pyelography or cystoscopy may be required to ascertain the relationship of the mass with the urinary tract.[8] We ascertained our diagnosis preoperatively by a transrectal ultrasonography. Sorensen et al in their case, had suggested that translabial ultrasonography or MRI could be useful modalities. In their case, cervical leiomyoma was a close differential diagnosis.[9] However, in our case, the cervix was distinctly seen (at least 2 cm away) and identifying its origin from the posterior vaginal wall unrelated to cervix was not a clinical difficulty. MRI may be an option in cases with diagnostic dilemma.[10]
Simple surgical excision and posterior colpoperineorrhapy completed her treatment. No preoperative biopsy of the mass was done as the mass was small, margins were easily delineated and imaging did not suggest any chances of malignancy. It is important to note that in the case of vaginal leiomyoma there is a definite chance of misrepresented sample and hence delayed/ misleading diagnosis, as reported by Woo et al.[11]