Ectopic pregnancy constitutes 2% of all pregnancies and is responsible for 9 % of all maternal deaths. Common sites of an ectopic pregnancy include tubal (97 %), ovarian (0.5 %), abdominal (1%) and uterine sites other than endometrial cavity.
Here we present a case of a woman presenting in emergency with complaints of spotting per vagina and severe abdominal pain diagnosed to be a case of ruptured ovarian ectopic pregnancy. Patient was managed successfully by emergency exploratory laparotomy with oophorectomy.

An ectopic pregnancy is one in which the fertilized ovum is implanted and develops outside the normal endometrial cavity. Ovarian ectopic pregnancy is one of the rarest forms of ectopic pregnancy. Its incidence is 1 in 2000 to 1 in 60000 pregnancies and account for 0.5 to 3 % of all ectopic pregnancies. The classic symptoms of an ovarian pregnancy are pelvic pain, amenorrhea and vaginal bleeding, of which persistent pelvic pain alone is the most common manifestation. Beta human chorionic gonadotrophin immunoassay and ultrasonography can be helpful in diagnosis, but a discrete gestational sac is seen only in an advanced ovarian pregnancy. Spiegelbergs criteria used in the diagnosis of ovarian ectopic pregnancy consists of intact tube on the affected side, gestation sac in the position of ovary, gestation sac connected to uterus by ovarian ligament and ovarian tissue found on the wall of the gestational sac on histological examination.[1] Management mainly consists of ovarian resection with postoperative methotrexate therapy. Rarely oophorectomy may be required in case of massive hemorrhage.

A 30 year old woman married since 7 years; Gravida 4 Para 2 Living 1 having previous one spontaneous abortion and one medical termination of pregnancy came with complaint of severe abdominal pain and backache since 2 days. She gave history of minimal vaginal bleeding 2 days ago. Urine pregnancy done at home was negative. She gave history of Hepatitis B antigen positive status that was detected in her previous pregnancy. No other significant medical or surgical history was present. Previous menstrual cycles were regular. She had undergone one lower segment cesarean section in view of meconium stained amniotic fluid 4 years ago.
On general examination her pulse was 120 beats per minute  and blood pressure was 90/60 mm Hg. She looked pale. On per abdominal examination there was generalized abdominal tenderness. On per vaginal examination uterus was normal size, anteverted and left sided fornix tenderness was present.
On transvaginal ultrasonography, a 2.3x2 cm hypoechoic mass lesion was noted on right side with free fluid levels having mixed echogenicity that was suggestive of right ruptured ectopic pregnancy with hemoperitoneum approximately 15-20 cc.  Her hemoglobin was 6.5 gm%. Immediately she was resuscitated. Two units of packed cell volumes were transfused, and she was shifted to operation theater for emergency exploratory laparotomy. On exploratory laparotomy, around 1000 ml hemoperitoneum and 150 grams of clots were found. Uterus was normal size and adherent to anterior abdominal wall. Left fallopian tube and ovary was normal. Right fallopian tube was normal.  Around 3x2 cm ruptured ovarian pregnancy was seen in the right ovary.(Figure 1) The ovary seemed very vascular and it was too friable to attempt enucleation of the gestational sac. Therefore, decision of oophorectomy was taken. Hemoperitoneum was drained, right oophorectomy was done and peritoneal wash was given with 500 cc of normal saline
On histopathological examination, sections identified ovarian tissue showing large hematoma with admixed fibrin. Many entrapped chorionic villi surrounded by cytotrophoblast and syncytiotrophoblast were seen in the ovarian tissue. Adjacent ovarian tissue and corpus luteum seemed normal. Findings were suggestive of right ovarian ruptured ectopic pregnancy. 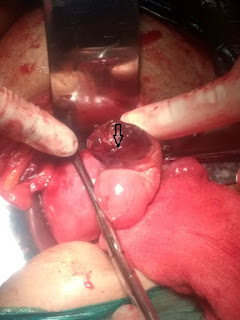 Ovarian ectopic is one of the rarest forms of ectopic pregnancy. Accurate diagnosis with prompt resuscitative measures and laparotomy can be lifesaving in acute emergency cases of ruptured ectopic pregnancy. When there is profuse hemorrhage, like in this case ovaries cannot be preserved and oophorectomy is the only choice.