A Rare Case Of Fetus With Limb Agenesis

Early identification of fetuses with congenital anomalies, chromosomal defects, metabolic diseases or other genetic syndromes is of paramount importance in modern obstetrics, since the option of termination of pregnancy is available. Limb anomalies and skeletal dysgenesis in offspring can cause a great harm to society, in view of consumption of resources as well as social and mental injury to the parents. Often an incidental ultrasonography finding, it can occur even in the absence of history of any drug intake or any familial history of skeletal dysgenesis.
Case Report

A 35 years old, gravida 3 para 2 with 2 healthy living children, came to our hospital with an ultrasonography report suggestive of a single live intrauterine gestation of 19 weeks. Skeletal survey showed absent left upper limb, extremely short left femur, absent tibia and fibula on left side and Congenital Talipus Equino Varus (CTEV) on the right side. There was no contributory family history and no history of drug intake or any radiation exposure. The mother did not suffer from any medical disorders. Amniotic band was less likely as more than one limb was involved. Specific genetic testing of parents or the abortus was not considered as the anomaly has a multifactorial cause unlike specific skeletal dysplasia syndromes. General and systemic examination revealed no abnormality. Uterus was 20 weeks size.
Pediatric surgery reference was taken and poor prognosis and need for postnatal NICU and possibly multiple reconstructive surgeries was explained. The patient opted for termination of pregnancy, and due consent was taken considering the substantial risk to the child. Anesthesia fitness was taken and the patient was posted for hysterotomy in view of prior two cesarean section.
Postoperatively the X ray of the abortus was done (figure 1) On gross examination (figure 2) the abortus had absent upper limb, extremely short femur, absent tibia and fibula on left side. CTEV on the right side could not be appreciated. Postoperative course of the patient was uneventful. 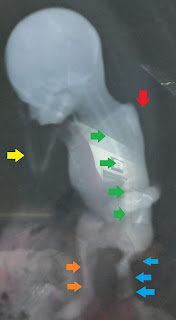 Skeletal dysplasia can occur in a number of syndromes like achondroplasia which is caused by mutations in FGFR3 gene.[1] Larsen syndrome is also such a syndrome which affects the bone development throughout the body. They generally have small extra bones in their wrists seen on X- rays.[2] It was considered as a differential diagnosis in this case.
National birth defect surveillance is carried out by the Birth Defects Registry of India. There are multiple individual hospital studies as well. The estimated predelivery rate of congenital anomalies diagnosed is around 11 per 1000 births and the rate of abortions due to congenital anomalies is 4.39 per 1000 births.[3] The large gap is obvious and the need for prenatal diagnosis of major anomalies and possibility for timely intervention or abortion if needed.
The option of termination of pregnancy is offered in all these cases. Induction of labour with prostaglandin E1 analogue misoprostol, is now a common practice and several studies have reported excellent results, including in second trimester of pregnancy.[4,5] Surgical second trimester abortion is preferred over medical methods in view of better outcome and success rates  in a patient with previous uterine surgeries.[6] Our patient underwent a surgical method of termination of pregnancy.
Skeletal defects are rare in uncomplicated pregnancies without family history or history of drug intake, most common being talipes equinovarus. The rate is 49/10000 live births as per the study conducted by Bhide et al.[3]  Majority of anomalies are cardiovascular or neural tube defects. The skeletal dysplasias or osteochondrodysplasias are a heritable group of more than 450 well delineated disorders that affect primarily bone and cartilage, but can also have significant effects on muscle, tendons and ligaments. Skeletal dysplasias are inherited in mainly a dominant mode, but can also be recessive. Knowledge of these is important for genetic counseling. Our patient was referred for genetic counselling with available data regarding this fetus and abortus.
Our patient was diagnosed with the fetal abnormality by an ultrasonography. In a large study by Dicke et al, the sensitivity of ultrasonography in picking up limb reduction defects involving long bones was 76%. The authors analyzed other parameters of fetal limb abnormalities also, and concluded that ultrasonography is an excellent modality for detection of fetal limb anomalies.[7]  Andrikopoulou et al analyzed the factors which improved ultrasonographic detection of isolated fetal limb abnormalities, and found that even a minimal increment in time spent at each ultrasonography gives rise to a significant improvement in detection rates of fetal limb abnormalities.[8]
In most cases of skeletal dysplasia, lethality usually results from small chest, pulmonary hypoplasia and respiratory compromise. Diagnosis is made based on clinical and radiographic findings. Nonlethal skeletal dysplasias are associated with short stature but overall affected individuals are cognitively normal and have a good quality of life.
Conclusion
In this era, ultrasonography can pick up fetal limb abnormalities. Continuation of a pregnancy with a fetus carrying an absent limb merits termination. Surgical termination may be required in scarred uteri. We present this case report and suggest that all efforts must be taken to identify every fetal limb abnormality.