A Rare Case Of Superior Mesenteric Vein Thrombosis In Pregnancy

Superior Mesenteric Venous Thrombosis (SMVT) is a rare entity. Its occurrence in pregnancy is an even rarer possibility. Here a case of a primigravida with term gestation with acute abdomen who underwent laparotomy for suspected ruptured uterus, but actually had ischemic bowel segment due to SMVT is presented. Resection and anastomosis of involved bowel segment, management with anticoagulation and an otherwise uneventful post operative period is described here.
Introduction

Small bowel ischemia is a relatively uncommon disorder and the causes are diverse. Due to vague clinical presentation and the lack of specific diagnostic tests, early diagnosis of intestinal ischemia is difficult, resulting in significant morbidity and mortality. We herein report a case of a woman who presented with signs and symptoms of acute abdomen at 38 weeks gestation. Pregnancy is a hypercoagulable state, and can cause ischemic phenomena. However, intestinal ischemia due to SMVT is rather rare.

A 25 year old primigravida presented at 38 weeks gestation with complaints of pain in abdomen and three episodes of vomiting. Pulse was 92/ minute and blood pressure was 110/ 70 mm Hg.  Cardiovascular and respiratory system were unremarkable. Abdominal examination showed a single fetus in cephalic presentation with regular fetal hearts, and vaginal examination was suggestive of latent labor. Urine albumin was nil and preeclampsia was ruled out. Vomiting as a premonitory symptom of eclampsia was considered less likely. Oxytocin drip (2.5 units in 500 ml ringer lactate) was started at 8 drops/ min. Regular vaginal examination showed progress of labor. However, around 4 hours after starting oxytocin, she complained of severe abdominal pain, not related to uterine activity, and examination showed guarding, tenderness and rigidity. There were features of acute abdomen with shoulder tip pain. There was progressive breathlessness, tachycardia, hypotension and distension of abdomen, and there was sudden disappearance of fetal heart sound. Ultrasonography was done on emergency basis and fetal demise was confirmed. It also showed an intact uterus, dilated bowel loops and minimal free fluid in peritoneal cavity. The drop in blood pressure was such that inotropic support was required. Hematological and biochemical profile was largely normal. The only abnormal investigation was a WBC count of 18000/ mm3. The clinical impression was one of uterine rupture and a decision of emergency exploratory laparotomy was taken in view of her deteriorating general condition. Procedure was done under general anesthesia and the abdomen was opened by a Pfannenstiel incision. Intraoperative findings showed presence of 500 cc of serosanguinous ascitic fluid. Uterus was intact and a lower segment cesarean section was performed to deliver a fresh still born male baby of 2.5 kg and there was no evidence of any retro-placental clot. Surprisingly, there was a gangrenous small bowel segment of around 60 cm (figure 1). 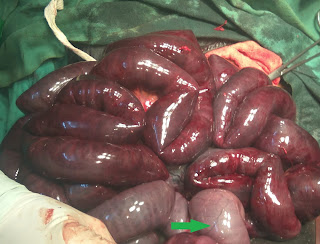 General surgeon was called over.  Volvulus was ruled out and a resection of the gangrenous bowel segment and anastomosis was performed. No stoma was required. One unit whole blood was transfused intraoperatively. Intra-peritoneal drain was kept and abdomen was closed. Close postoperative management was required in surgical ICU, and ionotropic support was tapered and withdrawn on postoperative day 3.  She was kept nil by mouth and was started on oral sips on sixth postoperative day and bowel movement was smooth after that. She was given higher antibiotics and anticoagulant therapy with injection Heparin unfractionated 5000 IU 6 hourly for 5 days with warfarin overlap from day 3 with 2 mg tablet to maintain an International Normalized Ratio (INR) between 2 to 3. Sutures were removed on tenth postoperative day and she was discharged two days later, with advice of continuing anticoagulation till further advice.  Investigations to rule out other causes for thrombosis were advised, but could not be done due to non-affordability. Histopathology report was consistent with bowel ischemia, which showed necrotic changes with denudation of bowel mucosa with inflammatory changes with neutrophilic infiltration with edema all over.
Discussion
Superior Mesenteric Vein drains blood from jejunum and ileum, and amalgamate with the splenic vein to form the hepatic portal vein. Thrombosis of this vein is a rare entity. Around 5 to 15 % cases of mesenteric ischemia are due to SMVT. Lin et al have mentioned that only 17 cases of SMVT have been described in pregnancy.[1]
In general, the causes of SMVT include hypercoagulable states (protein C/S deficiency, Factor V Leiden mutation, antithrombin 3 deficiency),[2] polycythemia vera, neoplasms, abdominal trauma, intra-abdominal infections and autoimmune causes. No specific cause is found in upto 49 % cases. In our patient, causes of hypercoagulation could not be ascertained due to financial non-affordability. Use of oral contraceptive pills can enhance the chances of thrombosis.[3] In our patient, there was no history of using any hormonal contraception. Our patient presented at term. Cases have been reported at early gestation,[4] and at 8th month of gestation.[1]
SMVT can be acute or chronic. In chronic cases, there can be features of portal hypertension. In our patient, there was typical features of the acute presentation (severe pain in abdomen, distension, vomiting, bloating, fever, tachycardia and hypotension). The diagnosis of the condition in this patient was probably delayed due to simultaneous occurrence of labor at term. Initially, the features mimicked normal changes of labor. Only when fetal hearts disappeared, there was a suspicion of something more sinister. Exploratory laparotomy with resection and anastomosis is the optimal management, as was done in our case. Shui et al have described a surgical management, but reversible ischemia due to a volvulus. In that case, resection anastomosis was not required.[5]
Anticoagulant therapy is the most important step in management, immaterial of whether the case has been managed surgically or conservatively. Low molecular weight heparin in the doses of 0.6mg/kg or unfractionated heparin in the dose of 5000 IU 6 hourly followed by overlapping with warfarin to maintain INR between 2 to 3 is the treatment of choice. There are no defined guidelines for the duration of anticoagulation and the decision is to be made as per the case. Our patient is being continued with anticoagulation till date.
The decision on continuation or termination of pregnancy is taken as per the case and available facilities. In our case, it was a concomitant LSCS. Engelhardt had described onset of labor, resulting in vaginal birth soon after the surgical procedure.[6] Lin et al have also described concomitant LSCS. Postpartum cases have also been described.[1]

To conclude, we stress that in a pregnant woman with a clinical presentation of acute abdomen, even with the absence of the other known risk factors, superior mesenteric vein thrombosis should be kept in mind and included in the differential diagnosis to avoid potential complications.