An Unusual Case Of A Large Leiomyoma Complicating Pregnancy

Uterine leiomyomas are common benign smooth muscle tumors. Their incidence during pregnancy approximates 2 percent. The range varies with frequency of routine sonography and the population characteristics. Presence of a leiomyoma may complicate a pregnancy in various manners. We discuss one such case of a pregnancy complicated by a large uterine leiomyoma.

Uterine leiomyomas are usually asymptomatic during pregnancy but may occasionally be complicated by cystic degeneration, red degeneration or torsion. Leiomyomas increase the risk of spontaneous abortions, preterm labour, premature rupture of membranes, intrauterine growth restriction, antepartum haemorrhage, malpresentations, obstructed labour, need for cesarean section, retained placenta, and postpartum hemorrhage.[1-4] Factors most important in determining the morbidity during pregnancy are the size, number and location of the leiomyomas.

A 37 year old woman, ninth gravida 9, third para, with 2 living issues, 1 neonatal death, 1 ectopic gestation and 4 spontaneous abortions in the past, presented with 37 weeks of amenorrhea. She had undergone exploratory laparotomy with right salpingectomy in view of a ruptured ectopic gestation. She had 3 full term normal vaginal births, and 4 spontaneous abortions following which check curettage was done in all 4 cases in view of incomplete abortion. She had two ultrasound reports during antenatal period showing posterior intramural leiomyoma with increase in size during pregnancy, from 1.8x1.8 cm on 20/7/18 to 4.8x 4.6 cm on 5/9/18. She was hospitalized because she was hypertensive. An obstetric ultrasonography was done on 19/12/18, which showed a single live intrauterine gestation in breech presentation with gestational age of 33 week 2 days with intrauterine growth restriction, severe oligohydramnios (amniotic fluid index 0-1) and fetoplacental insufficiency with brain sparing effect. The pregnancy was terminated by a lower segment cesarean section in view of breech presentation with above mentioned ultrasonographic changes. After delivering the baby, the posterior wall intramural leiomyoma of approximately 8x8 cm in size was observed. There was no active bleeding. The leiomyoma was kept undisturbed and uterine closure was done and hemostasis was achieved. Postoperatively patient had 5 episodes of atonic postpartum hemorrhage over 2 hours, each episode with clots of 70-80 ml approximately. Bleeding was not controlled with intravenous Oxytocin infusion, rectal Misoprostol and intramuscular 15S, 15 CH3 PGF2alpha. On vaginal examination the cervix was found to be open and the leiomyoma was felt through the open cervix. A postpartum hysterectomy was done in view of resistant atonic postpartum hemorrhage. A posterior intramural leiomyoma of size 8x8 cm was found (figure 1). The patient made an uneventful recovery. 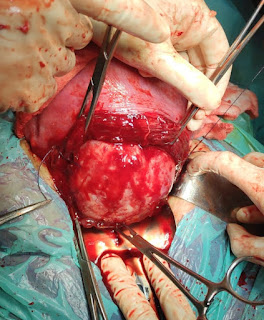 Figure 1. Intraoperative findings: the leiomyoma is seen to be bulging in the uterine incision for cesarean section. 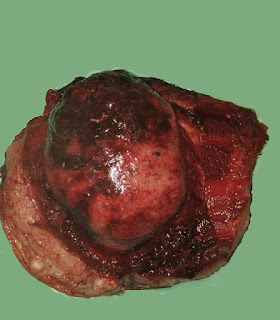 Figure 2. Surgical specimen: the leiomyoma is seen to be bulging in the uterine cavity after bisection of its anterior wall.

Leiomyomas are present in 2% of pregnant women. They are usually asymptomatic in pregnancy. The obstetric adverse events include spontaneous abortions, preterm labor, fetal growth restrictions, malpresentations, placenta previa, placental abruption, dysfunctional labor and atonic postpartum hemorrhage.[5] The need for a cesarean section is also increased in view of some of the adverse events. Other than malpresentations, the adverse events are associated with intramural or submucous leiomyomas, more with the latter. Our patient had fetal growth restriction, breech presentation, she required a cesarean section and had atonic postpartum hemorrhage.

In our patient the leiomyoma was large (8x8 cm), was situated in the posterior wall, bulging into the uterine cavity. It was sessile and had a large base. It was not removed during cesarean section because it was not anywhere near the uterine incision and there was no indication for the myomectomy. Serious hemorrhage could have resulted if an attempt was made to remove the leiomyoma at that time, because it was largely intramural. That would have forced us to give massive transfusion of blood and blood products and perform uterine artery embolization and hysterectomy.[6-11] The plan was to perform a myomectomy after puerperium, if required.[12] Obstetric hysterectomy was not done immediately after the cesarean section, because bleeding from the placental bed was well controlled.

Clinical judgement and foresight are required for anticipating possible future complications and need for repeat surgery before making a decision about cesarean hysterectomy for uterine leiomyomas.