Subserosal Fibroid Misdiagnosed As Ovarian Mass In Pregnancy: Even MRI Is Not 100% Diagnostic

Even MRI may not clear diagnostic dilemma in big fibroids with cystic or hyaline degeneration. We present a 24 years old primigravida who was diagnosed to have a right adnexal mass of ovarian origin. She had a successful vaginal delivery. At 2 months postnatal, laparotomy revealed this mass to be a subserosal fibroid with hyaline degenerative changes.

MRI seems to be a better modality for giving accurate diagnosis for fibroids where ultrasonography (USG) findings are inconclusive. However, in fibroids with cystic and hyaline degenerative changes, MRI may also not be 100 % accurate. Once there is a diagnosis of ovarian mass with pregnancy in second trimester, patients are considered for laparotomy. However, since our patient had presented at 37 weeks, she was given a trial of labor and she delivered vaginally successfully.

A 24 years old primigravida was admitted to our emergency department at 37 weeks of gestation with chief complaints of intermittent lower abdominal pain and vaginal discharge since last one day. She had been married for 4 years and this pregnancy was a spontaneous conception. On general examination she had mild pallor and BP was 150/100 mm of Hg. On abdominal examination, abdomen was overtly distended. Huge tense abdominal swelling around 20 x 10 cm located towards the right side of the uterus was felt. Uterus of around 34 weeks size was deviated towards the left. Abdominal findings were suggestive of pregnancy with a huge adnexal mass. She had also got one MRI done at 30 weeks of gestation which was suggestive of a huge multiloculated solid cystic space occupying lesion of ovarian origin measuring 18 x 12 x 11 cm. A single live intrauterine fetus of 29 weeks of gestation with placenta maturity grade 3 and adequate liquor was also reported (figure 1). Decision was taken for pre-induction cervical ripening with prostaglandins in view of poor bishop score. Examination findings showed that the adnexal mass was not obstructing the lower uterine segment. An indentation could be felt between the mass and uterine contour supporting that mass per se would not cause labor problems or complications. Internal examination on admission revealed unripe cervix hence induction with misoprostol by per vaginal route was decided and dose of 25 microgram four hourly was started. She entered into active labor after 4 doses. She had outlet forceps vaginal delivery of female baby. Indication of forceps was poor maternal bearing down efforts. The baby had a good Apgar score of 8/10 and 9/10 at 1 minute and 5 minutes respectively. Her birth weight was 2.4 kg. Labor and postpartum period were uneventful. She was discharged on 4th post-natal day with both mother and baby in satisfactory condition. 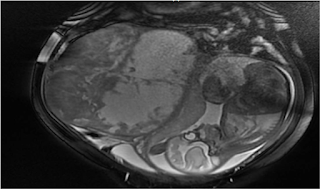 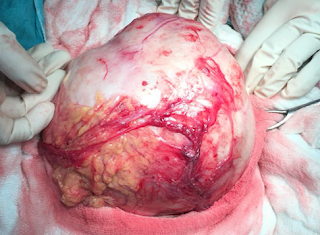 In postpartum period, all tumor markers were done which were within normal limits. She was closely followed up in the postpartum period. Two months after delivery she underwent a laparotomy and per operatively a huge subserosal fibroid was detected with multiple small fibroids (figure 2). Myomectomy was done. Leiomyoma was confirmed on histopathological examination (figure 3).

The average incidence of adnexal masses with pregnancies is 1 in 200.[1] There is  literature available about laparotomy in second trimester of pregnancy with adnexal mass or in third trimester according to presentation. Similarly, there are case reports of removal of mucinous cystadenomas weighing 6 kg after cesarean section by Yenicesu GI et al and 6.3 kg by Qublan HS et al.[2,3] However there is paucity of data about whether patients with asymptomatic huge adnexal mass with pregnancy, should be given trial of vaginal delivery or not. One case similar to our case with a huge ovarian mass who delivered vaginally was reported by Dipak et al and her vaginal delivery occurred without any intrapartum and postpartum complications.[4] If asymptomatic adnexal masses with pregnancy in third trimester present in emergency, but they do not cause obstruction of the lower uterine segment, then trial of vaginal delivery should be given or not, is still not very clear. However, in our case our patient was induced with all preparations for emergency cesarean delivery if required but finally she had successful vaginal delivery. However, in the postpartum period these masses should be followed up vigilantly and treatment provided. Degenerative changes in fibroids may result in heterogeneous or unusual presentations that may lead to a diagnostic dilemma.[5] MRI plays a crucial role in determining the origin and nature of a pelvic mass in cases with inconclusive USG features.[6] MRI appearances of leiomyomas vary widely and may present a diagnostic problem and even MRI may not be 100% accurate.[7] Although MRI helps in cases where USG findings are inconclusive but when fibroids undergo cystic or hyaline degenerative changes, even MRI may not give the correct diagnosis.