Cranial Keratinization and Pigmentation Of Vaginal Epithelium Without vaginal Prolapse

Solanke SS*, Parulekar SV**.
(* Second Year Resident, ** Professor and Head, Department of Obstetrics and Gynecology, Seth G S Medical College & K E M Hospital, Mumbai, India.)
Abstract
Fluctuations in the circulating level of estrogen and progesterone occurring during the menstrual cycle and in pregnancy influence the health of the genital epithelium. In addition, the menopause and subsequent estrogen deficiency have been implicated in the etiology of a number of urogenital complaints including incontinence, urgency and recurrent urinary tract infection. Here, we are presenting a case of keratinization and pigmentation of the posterior vaginal wall mucosa in postmenopausal woman without eversion of the posterior vagina.

Introduction
Normal vagina is a stratified nonkeratinized epithelium.[1.2] It has basal, parabasal, intermediate and superficial cell layers. Fluctuations in the circulating level of estrogen and progesterone occurring during the menstrual cycle and in pregnancy influence the health of the genital epithelium.[3] Urogenital problems in the elderly female population are experienced by one third of women from the age 50 years.[4] Atrophic changes within the bladder neck, urethra and vagina are mainly due to estrogen deficiency. Vaginal dryness and friction with undergarments is often followed by keratiniation and pigmentation of the of vaginal mucosa.[5]

A 62 years old woman, married for 48 years came to the gynecological outpatient clinic with complaints of something coming out per vaginum for 2 years. It was reducible on its own. She also complained of dryness of vagina and hot flushes.  She had no bladder or bowel complaints, white discharge or dyspareunia. She had four full term vaginal deliveries and was menopausal for 12 years. She had been recently diagnosed with hypertension and had no other medical or surgical high risk factors. On examination she had third degree uterine prolapse with large cyctocoele but no rectocoele. On per speculum examination, cervix and vagina were healthy, but posterior vaginal wall showed 2x2 cm area of blackish pigmentation in continuity with perineal skin. Her investigations for fitness for anesthesia were within normal limit. She underwent vaginal hysterectomy with site specific cyctocoele repair and a perineorraphy. During surgery, the pigmented part of vagina was excised and vaginal mucosa  was sutured in continuous non interloking manner with polygalatin No.0. Postoperativly the vaginal mucosa healed well and vaginal vault was healthy. Patient made an uneventful recovery. Histopathological examination of the specimen showed keratinization and melanin pigmentation of the affected portion of the vagina that had been removed during surgery. 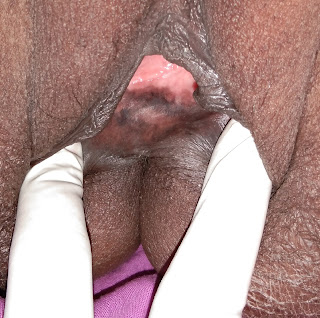 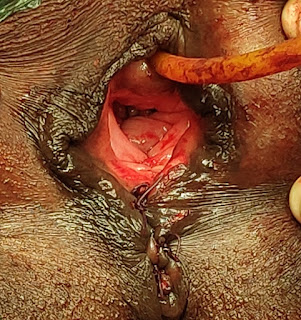 Proliferation and differentiation of cells in female reproductive organs, the oviduct, uterus and vagina, are regulated by endogenous estrogen.[6] Vaginal basal and parabasal epithelial cells show cytokeratins (K1, 4, 5 and 13), filaggrin, transglutaminases (-1 and -3) and caspase 14. But they do not normally form any keratin bundles as in skin.[7] Vaginal epithelium tends to get keratinized and pigmented with melanin when it is exposed to outside with vaginal wall prolapse of a long duration. It is usually seen in the most dependent position of the prolapsed vagina.[8]
The case presented was unusual in that there was no prolapse or eversion of the lower vagina. Thus the usual mechanism of development of keratinization and pigmentation of the vagina could not be operative. The only explanation possible is that the lower vagina was exposed because of laxity of the perineum due to past non-repaired obstetric second degree perineal tear. Even then the finding was unusual because such an occurrence is not normally seen in other women with a laxity of the perineum. The case is presented only as a curious phenomenon, and also to highlight the point that such epithelium needs to be excised in order to achieve sound epithelial healing postoperatively.