Malformed uterus like a bicornuate uterus with pregnancy fails to expand as pregnancy advances resulting in a catastrophic event like rupture of the pregnant horn leading to maternal morbidity as well as mortality. This is a case of a woman with bicornuate uterus and 16 weeks of gestation with a ruptured right horn of uterus. Patient was referred from a peripheral hospital in view of ruptured ectopic pregnancy. At our hospital exploratory laparotomy with excision of the ruptured right horn of uterus with repair of the uterine defect was done.

Incidence of uterine congenital anomalies due to Mullerian defects in normal fertile population is 3.2 %. Bicornuate uterus accounts for 5 % of all Mullerian anomalies.[1] Uterine anomalies have been classified according to American Fertility Society (now American Society for Reproductive Medicine). It divides uterine anomalies into seven groups but does not include vaginal and some combined anomalies. European societies like European Society of Human Reproduction and Embryology (ESHRE) and European Society for Gynecological Endoscopy (ESGE) have introduced a classification based on the anatomy of female genital tract that includes malformations of the uterus, cervix and vagina.[2] Bicornuate uterus is associated with obstetric complications like recurrent pregnancy loss, preterm labor, fetal malpresentations, intrauterine growth restriction, increased risk of operative intervention including cesarean section. This is a case of bicornuate uterus with rupture of right pregnant horn of uterus, classified as U4aC0V0 according to ESHRE/ESGE classification of female genital tract anomalies.[3]

A 23 year old primigravida with 16 weeks 2 days of spontaneous conception was referred from a peripheral hospital with ultrasonography (USG) suggestive of ruptured right adnexal ectopic pregnancy with live fetus in the abdominal cavity and gross hemoperitoneum. She had presented with complaints of abdominal pain, giddiness and history of fall at home. She was advised urgent USG and was referred to our hospital for further management. She came to the emergency room with complaints of pain in abdomen and giddiness. She was a known case of bronchial asthma since 10 years but was not on any medication with no recent acute exacerbation. She had no history of surgeries or menstrual complaints. On examination, she was conscious and well oriented. She was afebrile but pale, had a pulse of 100 per minute and blood pressure of 90/60 mm of Hg. Cardiovascular and respiratory systems were within normal limits. On abdominal examination, abdomen was uniformly distended with tenderness, rigidity and dull note all over the abdomen. On speculum examination, cervix and vagina looked healthy with minimal bleeding through the os. On, bimanual examination uterine size could not be assessed. Marked right forniceal fullness and tenderness was noted whereas left fornix appeared to be free.
On investigation, her hemoglobin was 7 gm/dl. One unit of packed cells was transfused and an emergency exploratory laparotomy was done. On laparotomy around 1000 ml hemoperitoneum and 100 grams of blood clots were noted. Bicornuate uterus with rupture of right horn with placenta in situ and fetus lying in the peritoneal cavity was noted. Fetus and placenta were delivered out. The pregnant right horn of uterus was found communicating with the left horn. Bilateral fallopian tubes and ovaries appeared normal. Excision of the ruptured right horn followed by repair of the uterine defect was done in two layers using polyglactin 1 in simple interrupted technique. Patient tolerated the procedure and anesthesia well. Post-operative course was uneventful. On discharge, advice regarding contraception and early registration in the next pregnancy was given. She was explained about the risk of rupture and need for cesarean section in the next pregnancy.[4] Histopathology report confirmed the diagnosis of a ruptured uterine horn. 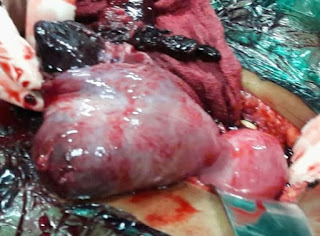 Development of the female urogenital tract is a complex and multifactorial process. The uterus and upper part of vagina develop from two paired Mullerian ducts. Congenital malformations occur if there is agenesis of one or two ducts or absence of fusion or reabsorption of septum between the ducts. Defect may be partial or total and may affect one or multiple areas of the genitourinary tract.[5]
Uterine anomalies have been classified according to The American Fertility Society (now The American Society for Reproductive Medicine) and European societies like European Society of Human Reproduction and Embryology (ESHRE) and European Society for Gynecological Endoscopy (ESGE).[2] EAC (Embryological aberration, Anatomical abnormalities and Clinical features) classification is a recent classification for congenital malformations of female genital tract. As per EAC, this case can be classified as UtR 12 cm Fn No Obs, UtL 6 cm Fn No Obs.[6]
USG is a useful tool in the diagnosis of such cases, but it is only 26 % sensitive and sensitivity further decreases as pregnancy advances.[7] In the past majority of the cases were diagnosed after rupture of the rudimentary horn. However, with advances in imaging techniques like 3 or 4-dimensional ultrasound and MRI, diagnosis can be made before rupture. Incidence of rupture in an anomalous uterus is 8-10 % as a malformed uterus is not able to expand as pregnancy advances.[8,9] But there are several reports of different clinical presentations of pregnancy in a bicornuate uterus ranging from rupture in early gestation to successful outcomes with live pregnancy reaching term.[10,11]
USG in early gestation helps in the diagnosis of uterine anomalies. High index of suspicion is required to diagnose Mullerian anomalies in pregnancy, so that catastrophic events like rupture of pregnant horn of uterus is prevented as well as treated at the earliest, preventing maternal morbidity and mortality. Treatment in such patients include exploratory laparotomy with excision of the pregnant horn and reconstruction of uterine defect.