Lipoleiomyoma’s are fatty tumors of the uterus which are not commonly seen. Cervical lipoleiomyoma’s are even rarer then uterine lipoleiomyoma. We present an interesting case of a large cervical leiomyoma that not only was challenging to remove surgically but also presented a histopathological surprise when bundles of smooth muscle were seen to be interspersed with lobules of mature adipocytes.

Fatty tumours primary to the uterus are very uncommon .The incidence varies from 0.03% to 0.2%. Lipoleiomyoma is a benign soft tissue tumor. It is more commonnly seen at extrauterine sites  either within the abdominal cavity or in the retroperitoneum. It can also befound in the muscular fascia and the subcutis.. [1] In the uterus, lipoleiomyomas are more common in the corpus [2] and are very rare in cervix with less than 15 cases of cervical lipoleiomyomata reported in literature. [2, 3, 4, 5, 6, 7, 8] We present a case of cervical lipoleiomyoma clinically mimicking malignancy.

A  40 years old woman, having completed her family  presented  with complaints of something coming out of vagina since 6 months and hesitancy in passing urine since 2 months. Patient had undergone surgery for fibroid uterus 3-4 years back, and another for cervical polyp 2 years back. Operative details were not available.  There was no history of fever, pain in abdomen, or burning micturition or any other urinary complaints. On examination, her abdomen was soft. Speculum examination showed a large, non ulcerated mass. The mass appeared to be a fibroid growth.  On bimanual vaginal examination the whole anterior part of cervix was replaced with the fibroid.  Cervical rim or os could not be felt. Decision for total abdominal hysterectomy was taken. All preoperative serological, biochemical, radiological investigations  were within normal limits. After written, valid consent and peri operative parenteral antibiotics patients’ abdomen was opened by midline, infraumblical incision after administering spinal anesthesia. Intraoperatively there was difficulty in delivering out the uterus due to large posterior cervical fibroid growing downwards. Another small intramural fundal fibroid was also noted.  Total size of the uterus was around 12 weeks. Bilateral adnexa were normal. The upper pedicles of the uterus (round ligaments, cornual pedicles) could be divided and ligated easily. Bladder was low and not elevated by the cervical fibroid.Anterior fold of peritoneum could be identified and incised and the bladder was reflected off the isthmus of the cervix and the bladder was retracted.  Bilateral uterine vascular pedicles were divided and ligated. Supra cervical hysterectomy done and the cervical stump was then  held with long Allis forceps. The cervix was broad, and its lower end could not be felt. The whole cervix posteriorly, left laterally, anteriorly was replaced with the fibroid. Only a small area in the right anterior part did not have the fibroid extension. The cervix was debulked by bisecting it with an electrocautery and the fibroid was reached and enucleated from within its mucosal surface. The vagina was opened anteriorly on the right sided and a retrograde Maingot’s clamp was applied to the left angle of the vagina and then to the left uterosacral ligament. Both these pedicles were then divided and ligated. Fibroid was handed over to the nurse and sent for frozen section to exclude sarcoma changes as the gross examination of the fibroid did not show a whorled appearance or standard degenerative changes. Right vaginal angle was held with Allis forceps and divided and ligated. The bisected stump of the cervix on the right side was clamped laterally with Maingot’s clamp and divided and ligated and removed. The remaining surgery was completed by standard method and the patient was subsequently discharged on the 5th post operative day.  Frozen section was suggestive of degenerated cervical fibroid leiomyomatous polyp. 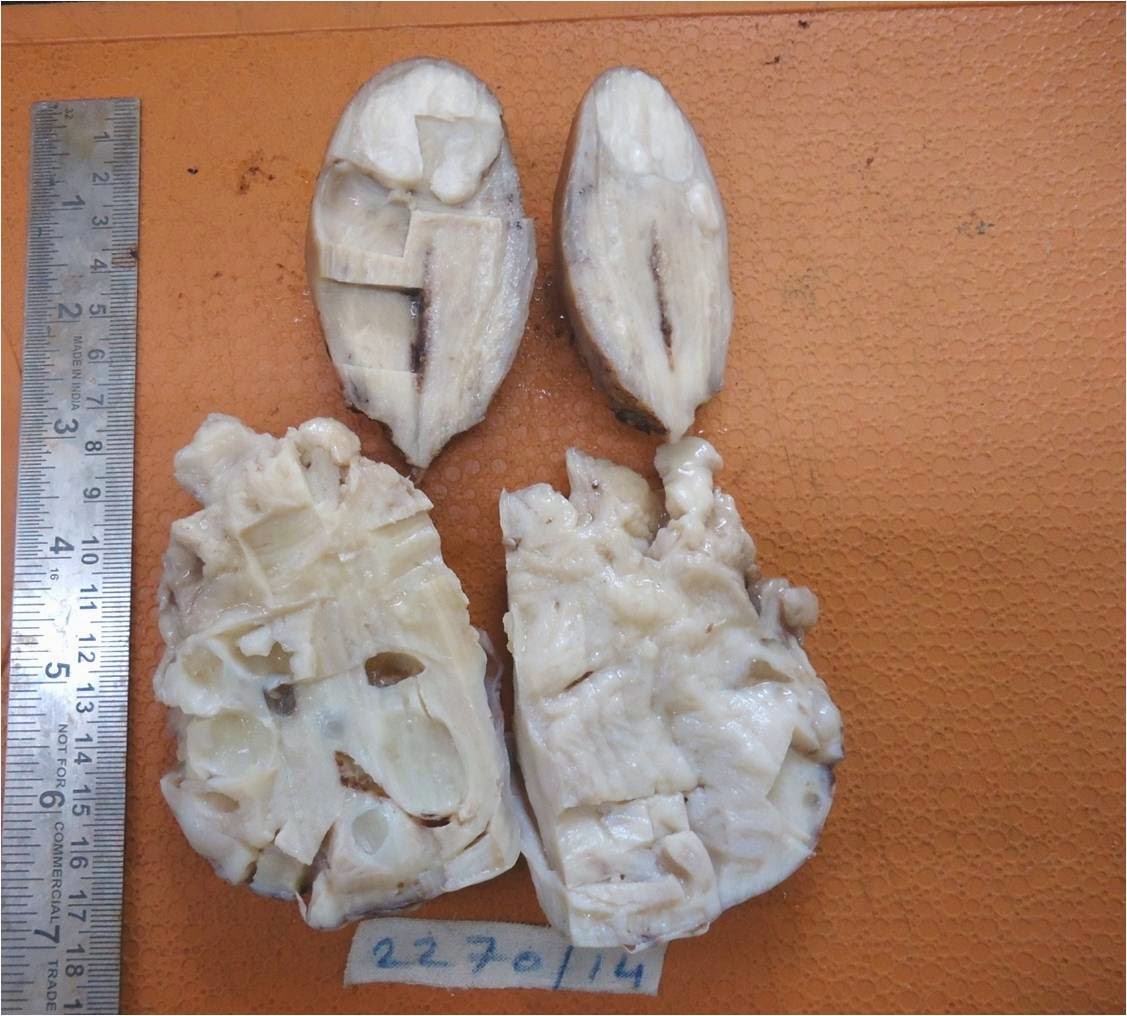 On microscopy the mass was covered by stratified squamous epithelium. The underlying tissue shows fascicles and bundles of smooth muscle with interspersed lobules of mature adipocytes. Few dilated endocervical glands were seen below the squamous epithelium and focally in the periphery amidst the tumor. There was no proliferation of endocervical glands There was no atypia or mitosis. The histological diagnosis was lipoleiomyoma of cervix. Sections from the myometrium showed two small subserosal leiomyomata. 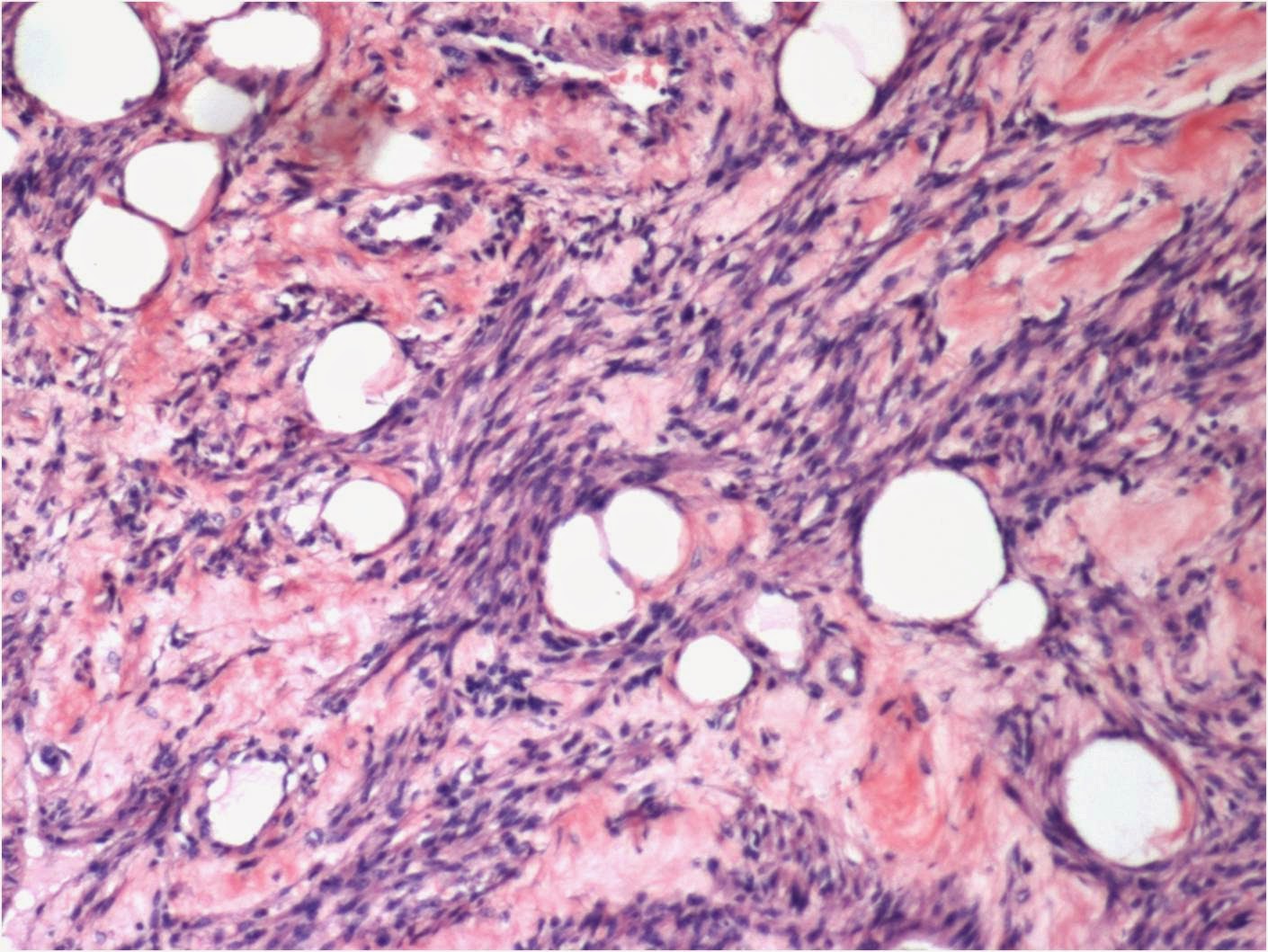 Uterine lipoleimyomas are rare tumors and represent less than 0.2 % of benign neoplasms [6].  Most of them are reported in uterine corpus . A large study of 50 uterine lipoleiomyoma revealed that the mean patient age was 54 and  mean  tumor size was 4.6 cm. Forty-three (83%) tumors were located in the uterine corpus, and 7 (13%) were in the cervix.[8]. The immunohistochemical findings suggest a complex histogenesis for these tumors. They may develop either due to direct transformation of smooth muscle cells into adipocytes by means of progressive intracellular storage of lipids or from the immature mesenchymal cells surrounding the vessels [6 ] The consistent finding of chromosomes 12 and 14 on different derivatives in these tumor indicates that the t(12;14) was a primary event and immunohistochemical studies showed that HMGI-C was aberrantly expressed in this tumor indicating that uterine lipoleiomyomas have a pathogenetic origin similar to that of typical leiomyomas.[9] Lipomatous component of these tumors can be picked up by CT scan or MRI. [7] They behave like the usual leiomyomas and no recurrence or fatality due to tumor is reported [8]