Mullerian anomalies constitute an important aspect of various conditions that affect a woman. A large number of syndromes are associated with these anomalies. It is important to know about them because that would permit one to look for other associated anomalies whose management could be critical to the patient’s survival. We present a case with unicornuate uterus, hemivagina, imperforate hymen and hematocolpos This is the first case of this occurrence in the world literature.

Mullerian anomalies are of different types, such as mullerian agenesis, mullerian hypoplasia, vertical fusion defects, lateral fusion defects, and unusual configurations of vertical-lateral fusion defects.[1] An obstruction to the outflow tract produces conditions like hematocolpos, hematometra, and hematosalpinx. We present a case which may be a new syndrome characterized by unicornuate uterus, hemivagina, imperforate hymen and hematocolpos This is the first case of this occurrence in the world literature.

A 16 year old single girl was referred to us with primary amenorrhea, cyclical abdominal pain, and an ovarian cyst on ultrasonography (USG). There was no contributory medical, surgical and family history. She was averagely built and nourished. Her general condition was fair, vital parameters were normal, and systemic examination revealed no abnormality. There was a mildly tender, cystic lump arising from the pelvis, extending to 2 cm above the pubis. The hymen was imperforate. It was bluish in color and bulging mildly. A rectal examination showed a 12 cm diameter cystic, mildly tender mass in the pelvis. A diagnosis of hematocolpos secondary to an imperforate hymen was made. However in view of an USG report showing an ovarian cyst, the test was repeated at our center. The report was a left ovarian cyst measuring 10 cm in diameter, and a uterus with a small hematometra. In view of two different sonologists reporting the presence of an ovarian cyst, we obtained a computerized tomography (CT) scan (figures 1 to 5). It showed an imperforate hymen, hematocolpos in the midline in the lower one-third, on the left side of the midline in the upper two-thirds, and left unicornuate uterus. The left ovary was close to the lateral end of the left horn. The right ovary was lower down on the right side of the hematocolpos. There was no uterine horn, even rudimentary one, on the right side. Both kidneys were normal in size, shape and location. 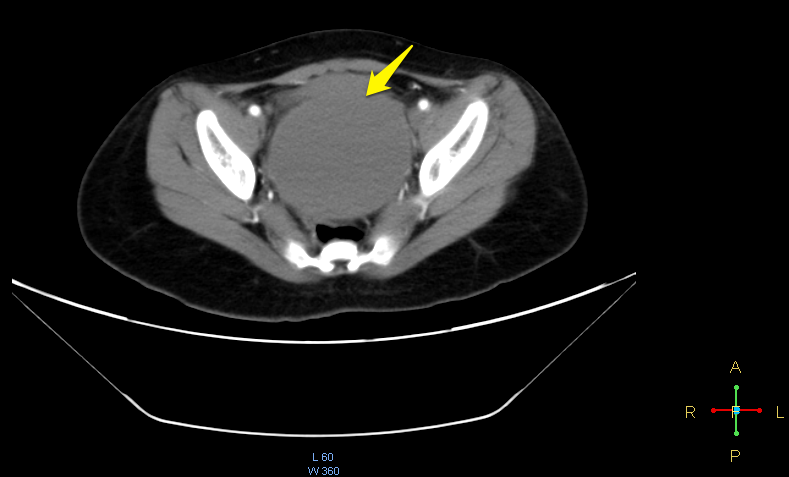 Figure 1. CT scan of the abdomen and pelvis. Hematocolpos in midline (arrow). 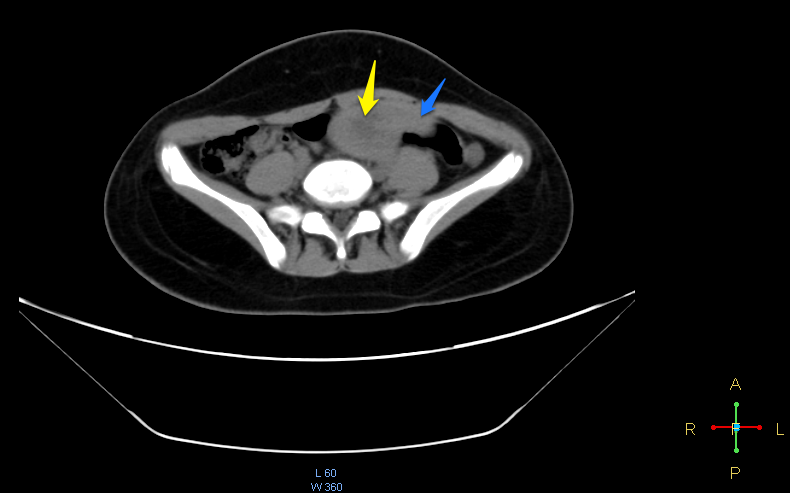 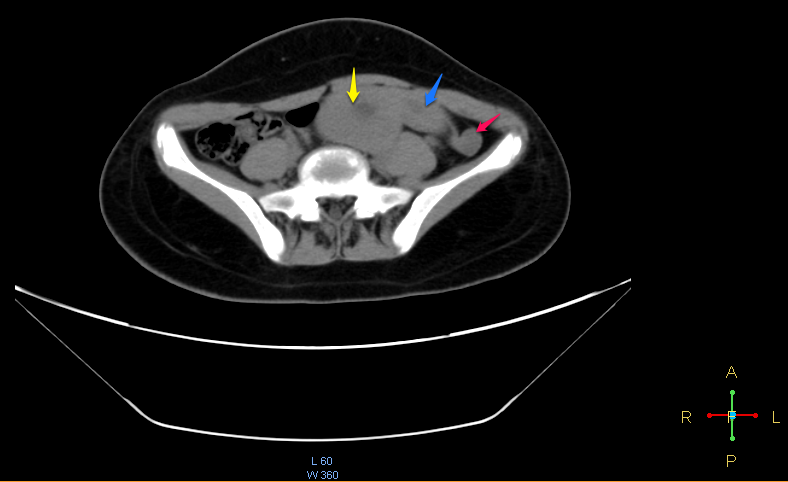 Figure 3. CT scan of the abdomen and pelvis. Hematocolpos (yellow arrow) deviated to the left side, the left unicornuate uterus (blue arrow), and the left ovary (pink arrow) are seen. 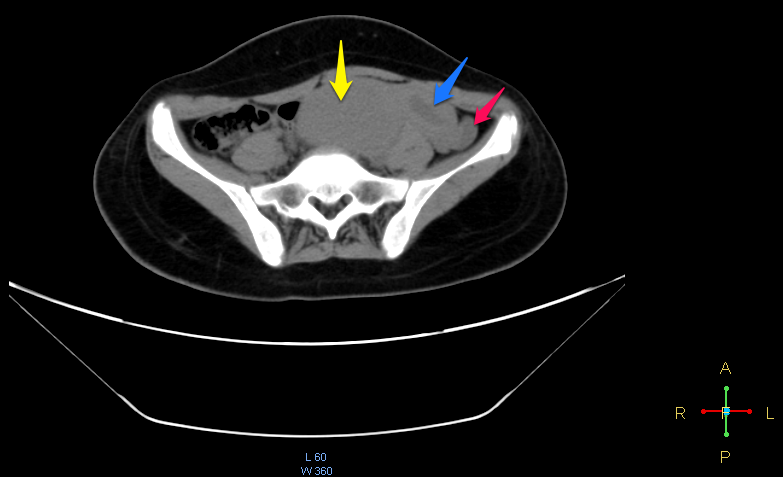 Figure 4. CT scan of the abdomen and pelvis. At a higher level than in figure 3, hematocolpos (yellow arrow) deviated to the left side, the left unicornuate uterus (blue arrow), and the left ovary (pink arrow) are seen. 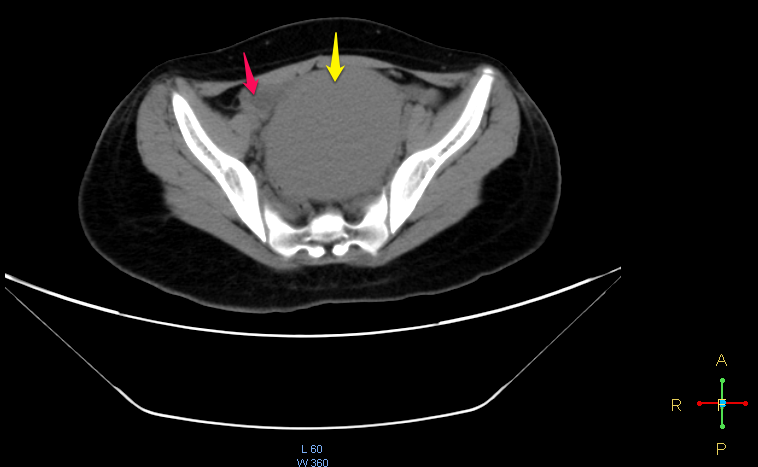 Figure 5. CT scan of the abdomen and pelvis. At a lower level than in figure 3, hematocolpos (yellow arrow) deviated to the left side and the right ovary (pink arrow) are seen.

The hymen was excised under general anesthesia and the hematocolpos was drained. Examination after the drainage confirmed the diagnosis of left unicornuate uterus. The lower one-third of the vagina was symmetrical to the midline, while the upper two-third of the vagina was deviated to the left. The patient made an uneventful recovery. She was well at the first follow up examination after 15 days, and had normal menstruation after a month.

The paramesonephric (Müllerian) ducts arise from the mesoderm lateral to the mesonephric ducts in the seventh week of fetal development.[2] They grow caudally passing lateral to the urogenital ridges, lying medial to the mesonephric ducts in the eighth week. The upper two thirds develop into the fallopian tubes, while the lower one thirds fuse with each other between the seventh and ninth weeks to form the uterus, cervix and upper two thirds of the vagina. The lowest part of the fused paramesonephric ducts fuses with the ascending endoderm of the sinovaginal node in the eighth week. Canalization of the sinovaginal node results in formation of the lower third of the vagina. The sinovaginal node gets inserted into the urogenital sinus at Müller’s tubercle. The membrane separating the vagina from the urogenital sinus (hymen) gets perforated before birth. The cloacal membrane, formed in the third fetal week, gets  delimited laterally by the cloacal folds by the fifth week. The cloacal folds fuse anteriorly to give rise to the genital tubercle. The urorectal septum fuses with the inner surface of the cloacal membrane and divides it to form the urogenital membrane anteriorly and the anal membrane posteriorly in the seventh week. The definitive urogenital sinus develops from the primary urogenital sinus. It has a pelvic portion and a caudal phallic portion. The vestibule (vaginal introitus) develop from the urethral groove and phallic portion. The pelvic portion develops into the urethra and lower third of the vagina. A failure of the hymen to perforate results in hematocolpos when the girl starts menstruation. If the septum between the lowest part of the fused paramesonephric ducts and the sinovaginal node does not canalize, a transverse vaginal septum develops. The mullerian dusts develop from the cranial end caudally. A total absence of development of one mullerian duct would cause unicornuate uterus, single cervix, and half of the upper two-thirds of the vagina. It is possible that the upper part of the duct develops forming the fallopian tube and the lower part does not develop so that there is unicornuate uterus and lateral half of upper two-thirds of the vagina. Since the lower one-third of the vagina develops from the sinovaginal node, it is present in such cases. These two communicate with each other when the septum between the two canalizes.[2]
In the case we have presented, the patient had left unicornuate uterus, left hemivagina (upper two-thirds), normal lower vagina (lower one-third), imperforate hymen and as a result of that hematocolpos involving the entire lower one-third and lateral half of the upper-two third of vagina. This combination of mullerian anomalies has not yet been described. However it is likely that the cases of unicornuate uterus and imperforate hymen causing hematocolpos were of this type, but were missed. Careful evaluation of the CT scan images of the hematocolpos in those cases may show many more cases and perhaps it would then be a syndrome.

Unicornuate uterus, hemivagina (upper two-thirds), normal lower vagina (lower one-third), imperforate hymen and as a result of that hematocolpos involving the entire lower one-third and lateral half of the upper-two third of vagina is a new combination of mullerian anomalies. The actual incidence of this may be high and will be evident if the CT or MRI images of the hematocolpos in these cases are reviewed critically.