Endometriosis is defined as presence of endometrium including the glands and the stroma at locations other than the uterine cavity. It causes inflammation, scarring, fibrosis, and adhesions resulting in distortion of pelvic anatomy, causing infertility. Our patient had conceived spontaneously and was found incidentally to have widespread endometriosis during cesarean section.

A 22-year-old primigravida, married for one and a half year, conceived spontaneously without any history of infertility was registered with us for antenatal care. Labor was induced at 40 weeks and 4 days of gestation. A trans cervical Foley’s catheterization was done for cervical ripening as her Bishop’s score was less than 4. She was taken up for lower segment cesarean section (LSCS) in view of failure of induction. After the delivery of fetus, the right ovary was found to have an endometriotic cyst measuring 4x4 cm. It got ruptured and chocolate like material flowed out of the cyst. Cauterization of the base of the cyst and powder burn marks was done. Two pearly white cysts of about 3x3 and 3x3 cm were also seen in the right ovary. Right ovary was stuck to the posterior surface of right side of uterus. Powder burns were seen on the right side, on the posterior surface of uterus. Left fallopian tube and ovary were normal but stuck deep in the pouch of . Our patient had Stage III (moderate) endometriosis as seen in Figures 1, 2, and 3. Her course in the ward was uneventful. Patient was discharged on Day 5 of LSCS. 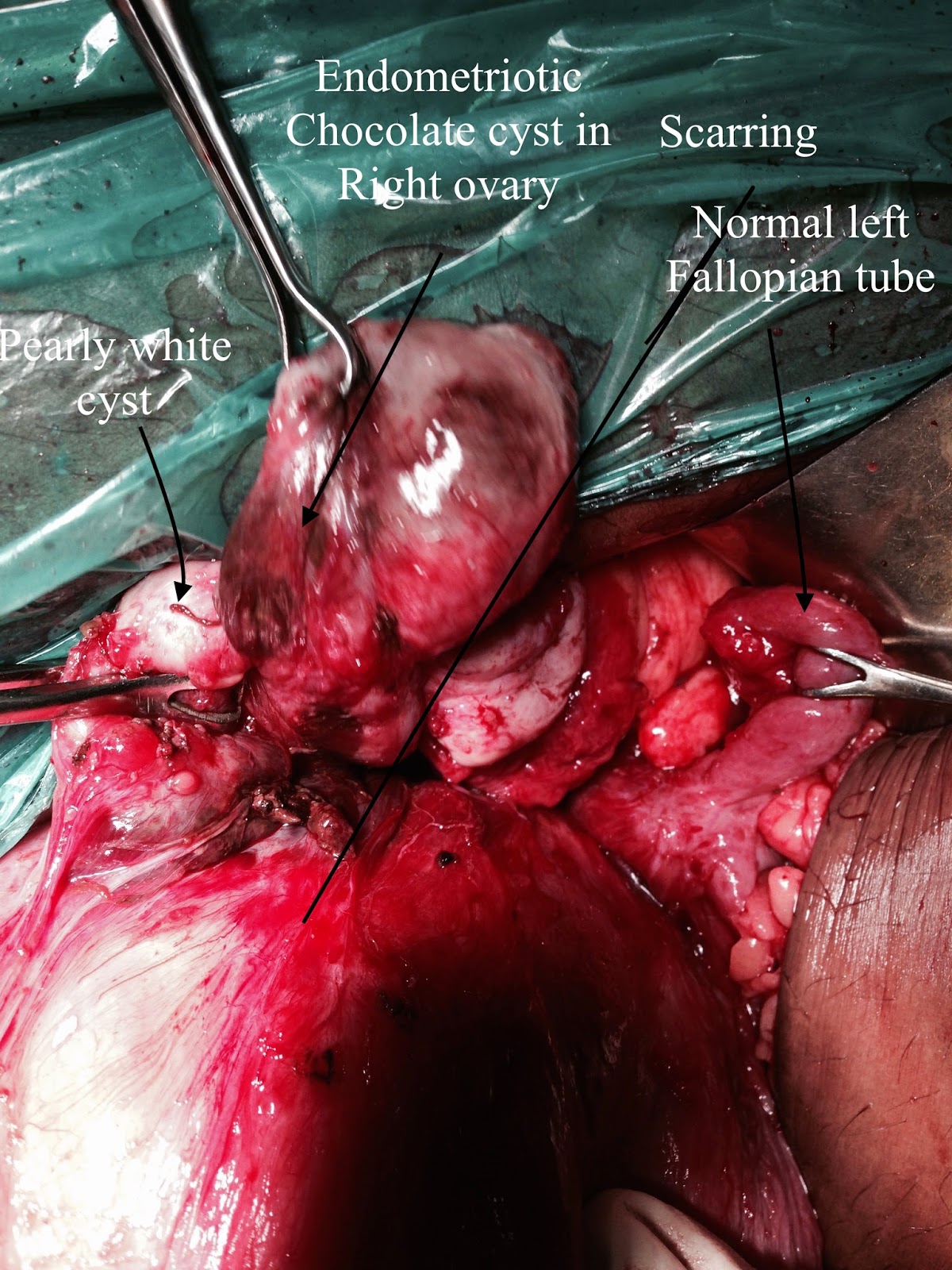 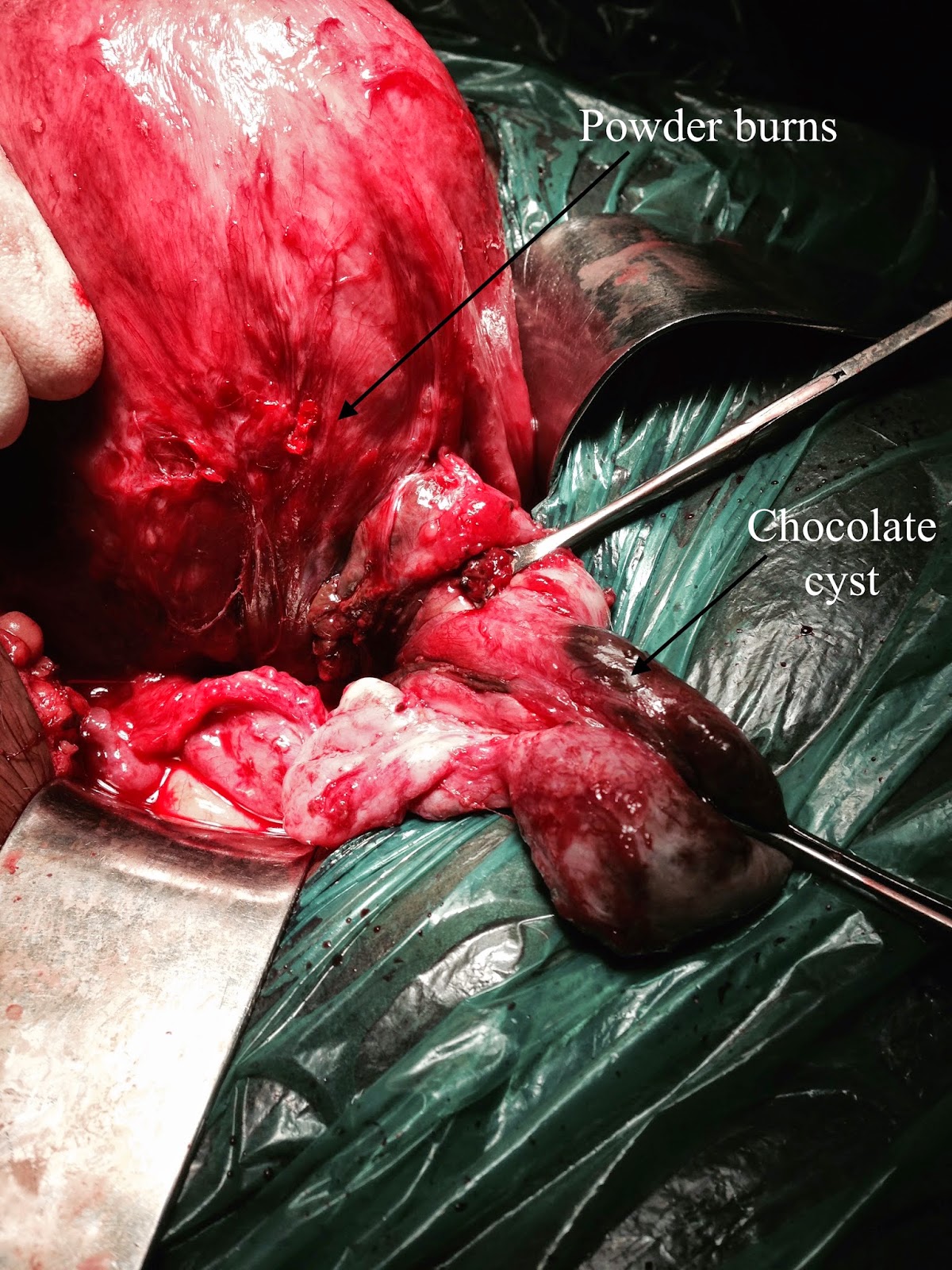 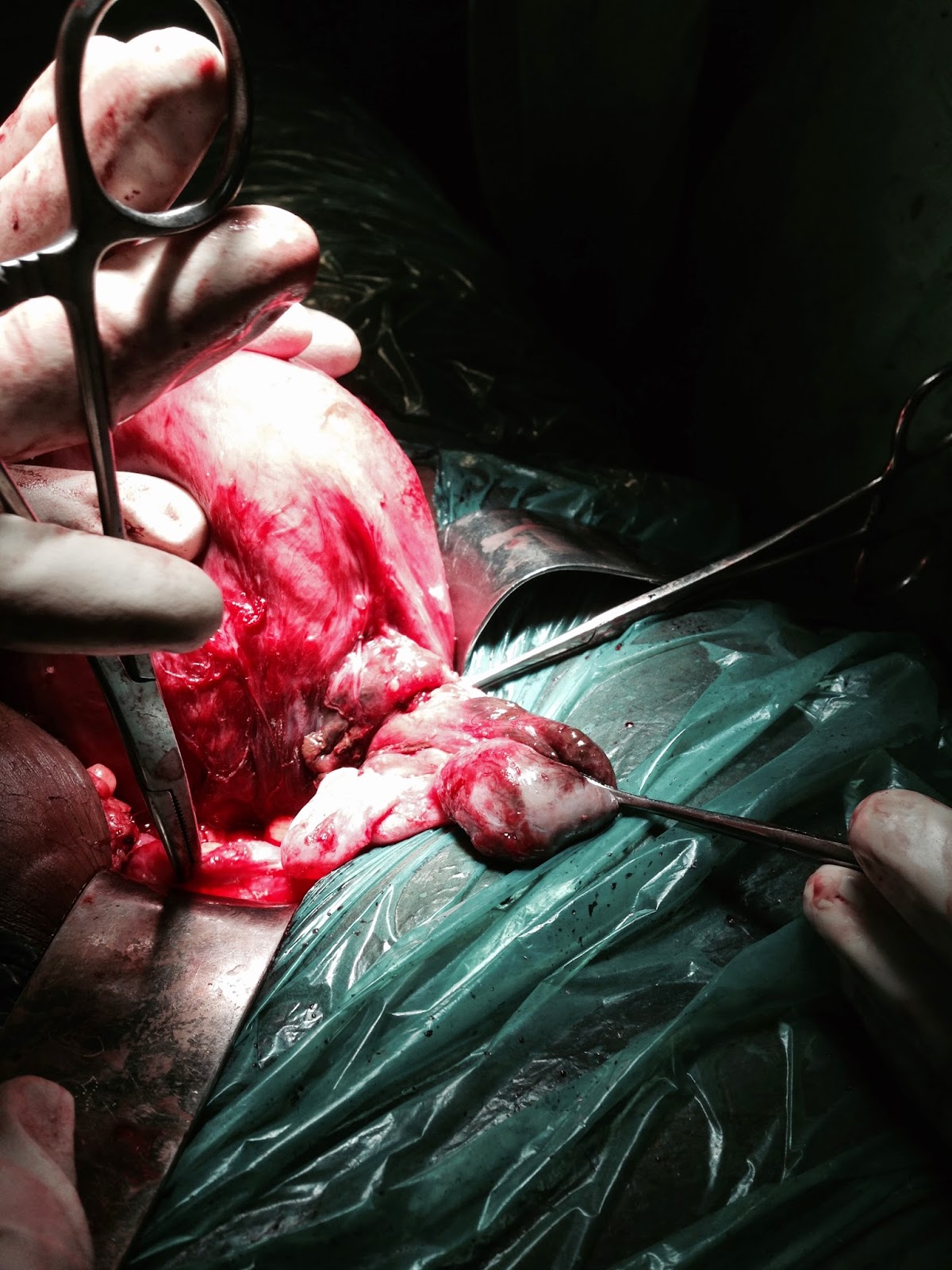 The prevalence of endometriosis is 6-10% in women of reproductive age group.[2] Nearly 20-25% of patients are asymptomatic.[1]  Short duration of menstrual cycle and longer duration of menstrual flow are associated high risk for endometriosis as retrograde menstruation is more commonly associated with such menstrual flow patterns. Pregnancy has a protective effect as it decreases the menstruation. Two pearly white ovarian cysts, seen intra-operatively were unlikely to be polycystic ovaries, as polycystic ovaries are more common bilaterally. Moreover, patients with polycystic ovaries usually do not ovulate spontaneously. The cysts could be probably due to adhesions on the surface of the ovary due to endometriosis. Endometriosis most frequently starts in the most dependent areas of the pelvis like, ovaries (most common site)[3] posterior pouch of , uterosacral ligaments, posterior uterus and posterior broad ligaments. Women with endometriosis are more likely to be delivered by caesarean section.[4] The endometriotic lesions seen were active lesions, powder burn marks, and chocolate cyst with its lining. Scarring was seen on the posterior surface of the uterus, which was due to healing effects probably due to pregnancy.  Decidualization of the endometrial tissue was not seen. Histopathology of the tissue was not sent because of obvious findings of endometriosis. One treatment modality for endometriosis is pseudo-pregnancy with combined oral contraceptive pills for nine months. Interestingly, this patient had active lesions even after nine months of amenorrhea. Rate of conception after surgical laparoscopic treatment by removing the endometriotic implants seen during laparoscopy and adhesiolysis as per different stages of the disease is as follows, Stage I-35.7%, Stage II-44.4% and for Stage III-53.3%. Rate of conception for Stage IV is 20%. However, the rates of conception are not dependent on severity of endometriosis.[5] The patient has been explained about the endometriotic lesions. The patient is further expected to be in amenorrhea during her lactational period. The treatment of endometriosis by cauterizing the powder burns and the endometriotic cyst wall and the protective effect from pregnancy and lactation increases the chances of patient being free from the disease and a good obstetric career. The further plan of management for the patient is to follow up with serial ultrasonography scans, if she becomes symptomatic when she starts to menstruate and check if ovarian endometriosis recurs.