A Rare Case Of Youssef’s Syndrome

Vesicouterine fistula (VUF) is the least common type of urogynecological fistula and is a rare complication of cesarean section. We present a case of VUF following cesarean section which was done for obstructed labor. It was successfully managed later by cystoscopy with ureteric catheterization followed by transabdominal repair of the fistula. Our case presented with the Youssef’s classical triad of cyclical hematuria (menouria), amenorrhea and absence of urinary incontinence. The relevant literature related to the clinical manifestations, etiological factors and diagnostic modalities, and management options are discussed here.

The incidence of VUF is 1%-4% and its incidence is being increased due to more frequent use of cesarean section.[1] In modern obstetrics VUF usually follows after lower segment cesarean section and accounts for 83% of the cases and rarely follows other causes like vaginal birth after cesarean section, high forceps delivery, and prolonged labor. Youssef in 1957 described the least common type of VUF which presents with classical triad of amenorrhea, cyclic hematuria (menouria) and absence of urinary incontinence which occurs due to inadvertent injury to the bladder during cesarean sections.[2] A majority of these patients are continent of urine and a high index of suspicion is required for its diagnosis. Although it is an uncommon syndrome, current evidence suggests an increasing prevalence of this syndrome due to the higher rate of cesarean section.

A 28 years old, Para 4, Living 2, fresh stillbirth 2 with previous two cesarean sections presented to the out-patient department with complaints of cyclical hematuria with amenorrhea for 10 months which started 6 months after her surgery for rupture uterus which was done for obstructed labor in a remote village. The patient gave history of lactational amenorrhoea for a period of 6 months following which she developed menouria. She continued to take treatment at a private clinic in her village for her complaint. She gave history of prolonged labor and shock for which she was shifted to the operation theater, details of the surgery were not available but she was very sure of uterine rupture. Her postoperative course was uneventful and she was discharged after 10 days. There was no history suggestive of urinary incontinence. She had two vaginal deliveries at home which were fresh still births and two cesarean section following that. On clinical examination she was averagely built and nourished. There was no abnormality detected on general and physical examination. On abdominal examination a vertical midline scar of previous cesarean section was present. On speculum examination there was no fistula seen and there was no urinary incontinence. On per vaginal examination the uterus was anteverted and normal in size. Three swab test was done after injecting methylene blue in the bladder and none of the swabs were stained blue. On checking her previous case records she had reports of pelvic ultrasonography which was suggestive of a cervical mass infiltrating the urinary bladder anteriorly. A computed tomography (CT) was also done, which showed heterogeneously enhancing mass in cervical region with central necrosis infiltrating the body of uterus and upper vaginal wall suspicious of cervical carcinoma with indentation of posterior wall of urinary bladder with mild parametrial fat stranding. In view of these reports she was referred to oncology center for further evaluation. At oncology center Human Papilloma Virus – DNA test was done which was negative. A cystoscopically directed cervical biopsy of the lesion which was situated in the posterior wall of the bladder closed to the bladder
trigone was done. It was suggestive of benign endocervical polyp with squamous metaplasia and no mass lesions in bladder, vagina and cervix. Repeat cystoscopy with vaginoscopy with bladder dye study was done which showed 3× 3 cms vesicouterine fistula in posterior wall close to bladder trigone. On intravesical bladder dye instillation, dye was seen coming through the cervix and vagina. Magnetic resonance imaging (MRI) showed 1.6 cm defect in lower uterine body and posterior bladder more near the left trigone wall suggestive of VUF and uterus, endometrium, vagina and both ureters were otherwise normal. Cervical malignancy was thus ruled out by oncologist and hence the patient was referred to our tertiary care center. Her preoperative laboratory investigations were normal. Urine routine microscopy was normal. Urine culture showed no growth. Hysterosalpinography (HSG) showed streak of contrast passing into the urinary bladder through fistulous track between lower uterine segment and bladder suggesting VUF.  MRI plates were reviewed which confirmed the diagnosis of VUF. History and   imaging confirmed the diagnosis of Youseff’s syndrome. 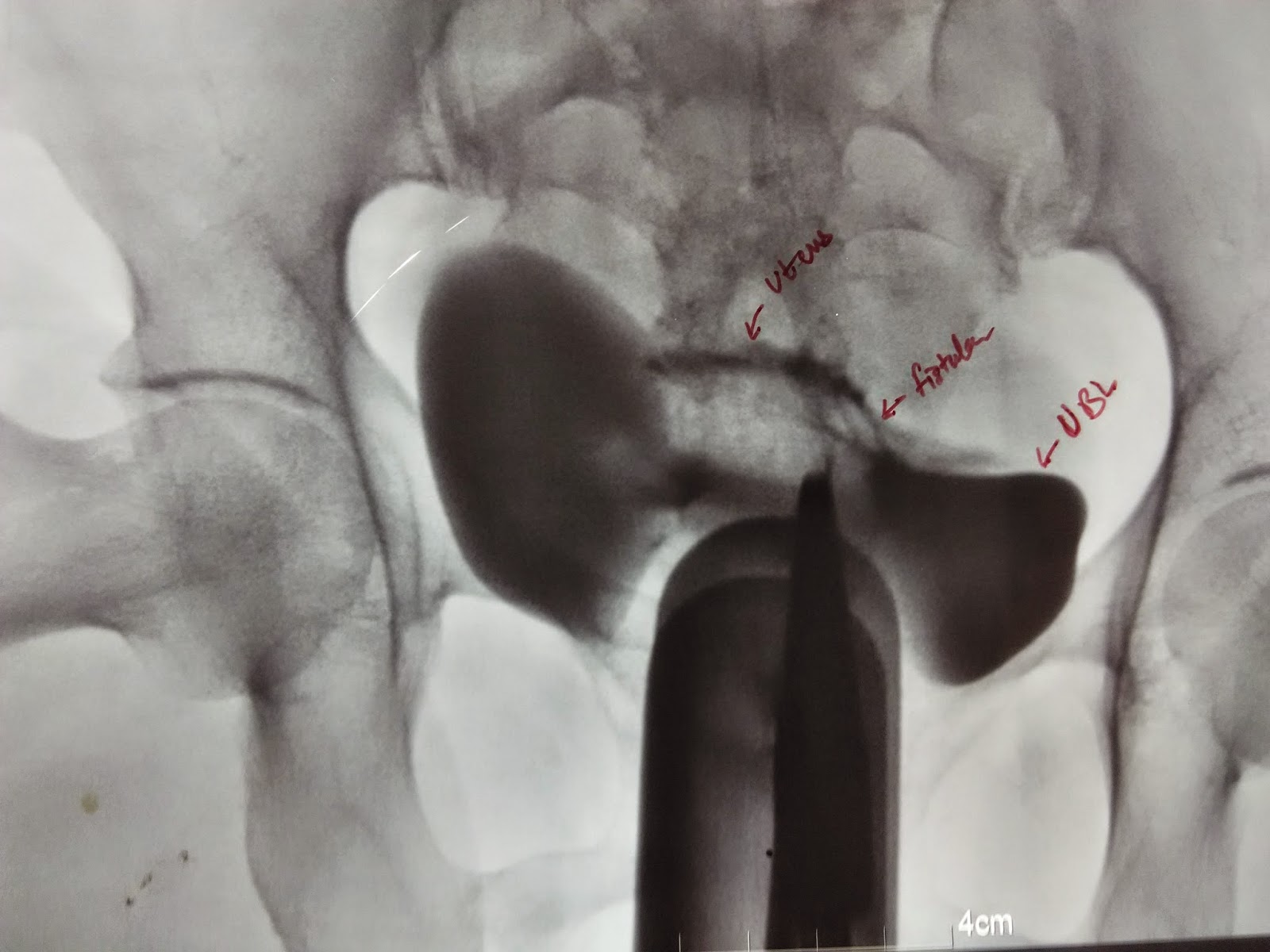 Figure 1. HSG plate showing streak of contrast passing into the urinary bladder through the fistulous track between the lower segment and the bladder. 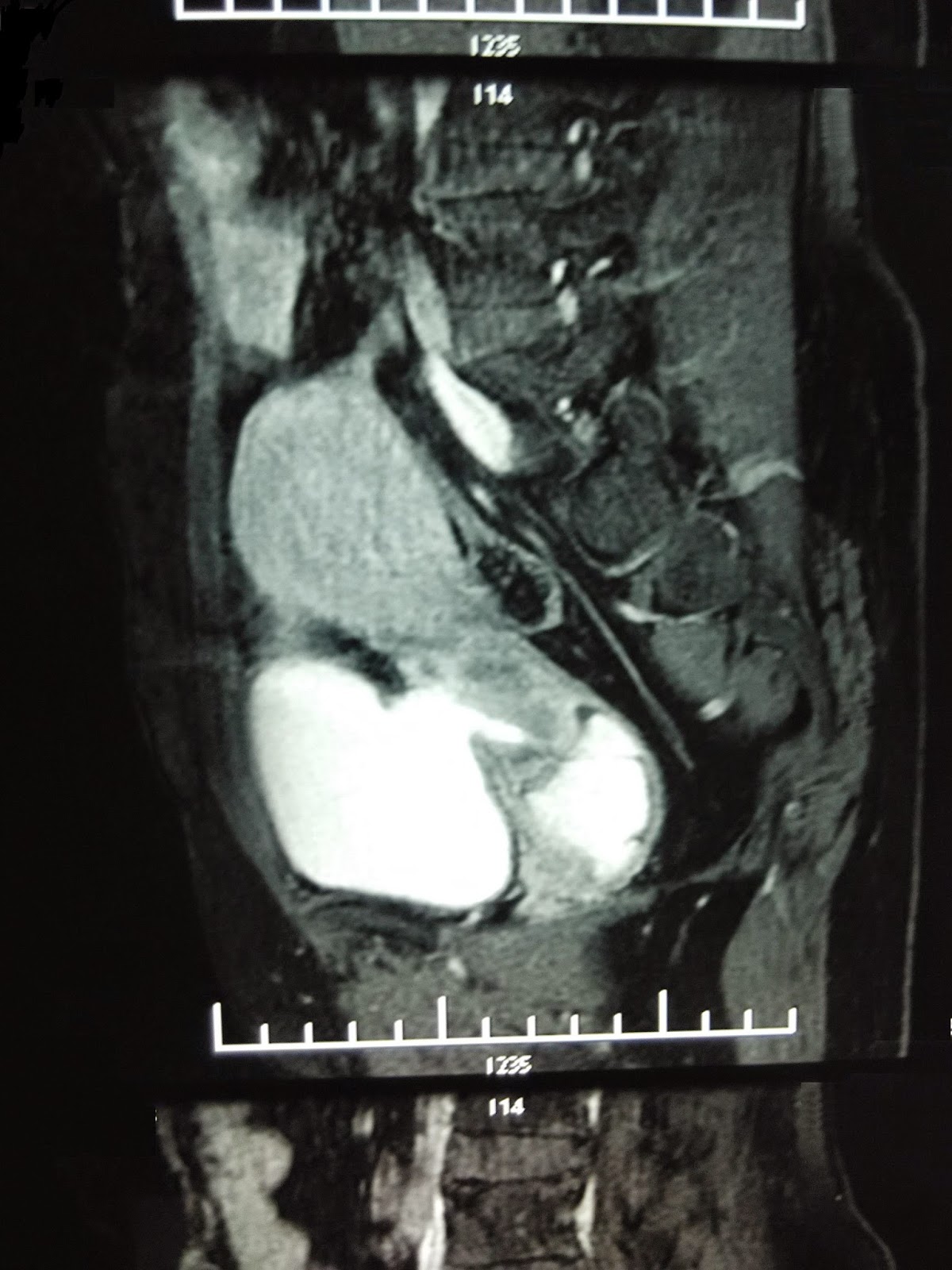 The patient was posted for cystoscopy followed by exploratory laparotomy for repair of vesicouterine fistula. Cystoscopy showed a fistula of size 3 × 1.5 cm over the posterior bladder wall, cranial to the trigone on the left side, above and lateral to left ureteric orifice. Left ureteric stenting was done. The abdomen was opened by vertical midline incision. There were dense adhesions between the anterior abdominal wall and the anterior surface and fundus of uterus. They were released by sharp dissection. The urinary bladder was densely adherent to lower uterine segment and cervix. these adhesions were released by sharp dissection. Fistulous tract was seen extending from the posterior bladder wall to the lower uterine body. Bladder dome was opened and incision was extended till the fistulous tract. Bladder was bivalved and closed with polyglactin no 2-0 in two layers after keeping a suprapubic catheter of size 20 Fr. The edges of the fistulous tract  located in the  lower body of uterus were refreshened and the opening  was closed with polyglactin no 1 as continuous interlocking sutures after keeping a pediatric Foley's catheter in the  uterine  cavity. Haemostasis was achieved and an omental patch was applied over the repaired area. Per urethral catheter of size 18 Fr was put. Pediatric Foley’s catheter and ureteric stent were removed on the 10th day.  On 14th postoperative day the patient complained of pericatheter leak and was started on tablet tolterodine 4 mg OD. She had partial relief of symptoms. Per urethral catheter was changed from 20 to 22 Fr and dose of tolteridine was stepped up to 8 mg OD. Cystoscopy was done. There was no evidence of any leak. The patient was continued on anticholinergic drugs.  Suprapubic and per urethral catheter were kept in situ for 6 weeks instead of the usual 3 weeks. On follow up visit the patient had got her normal menstrual cycle with no evidence of urine leak on examination. 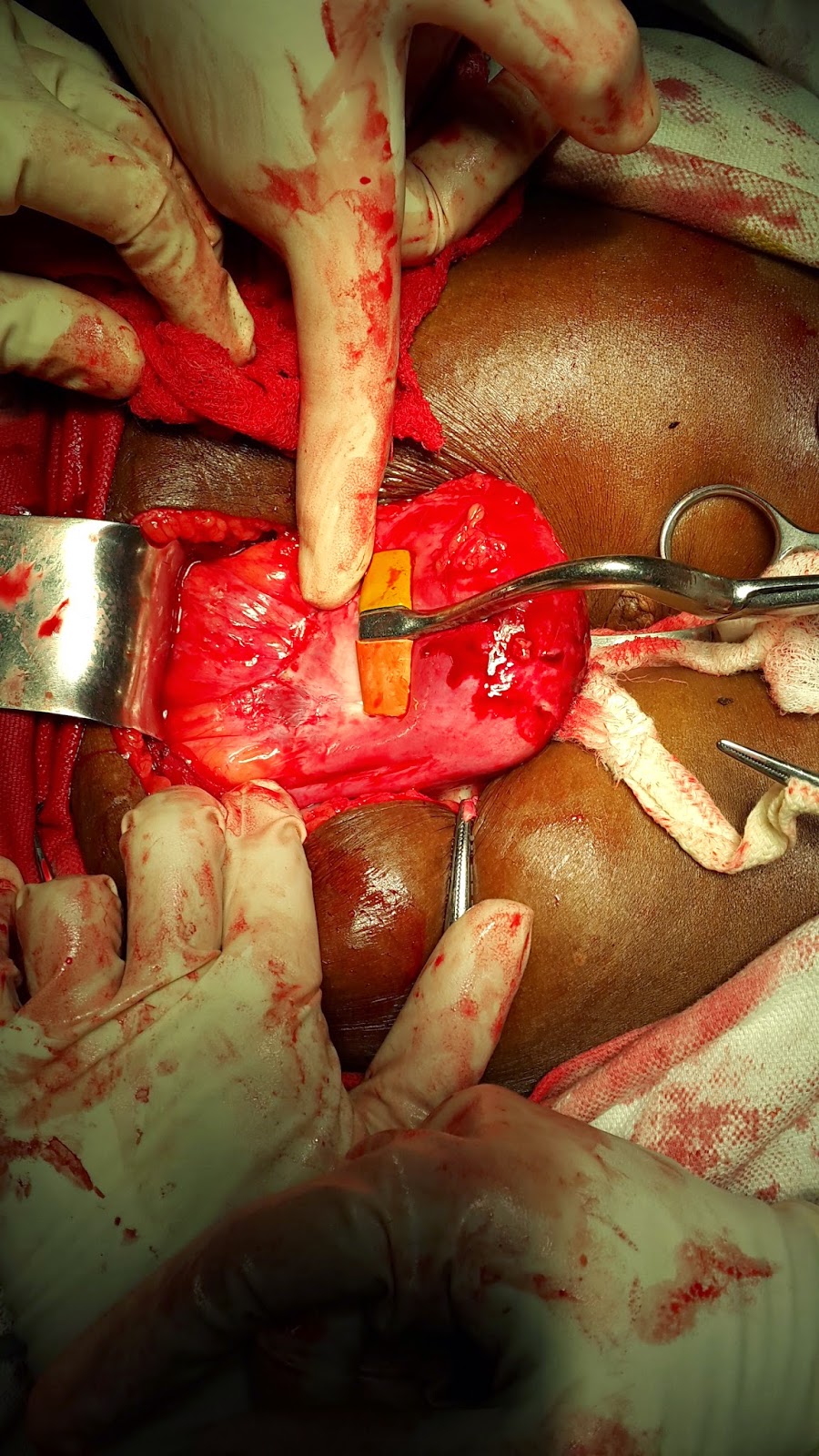 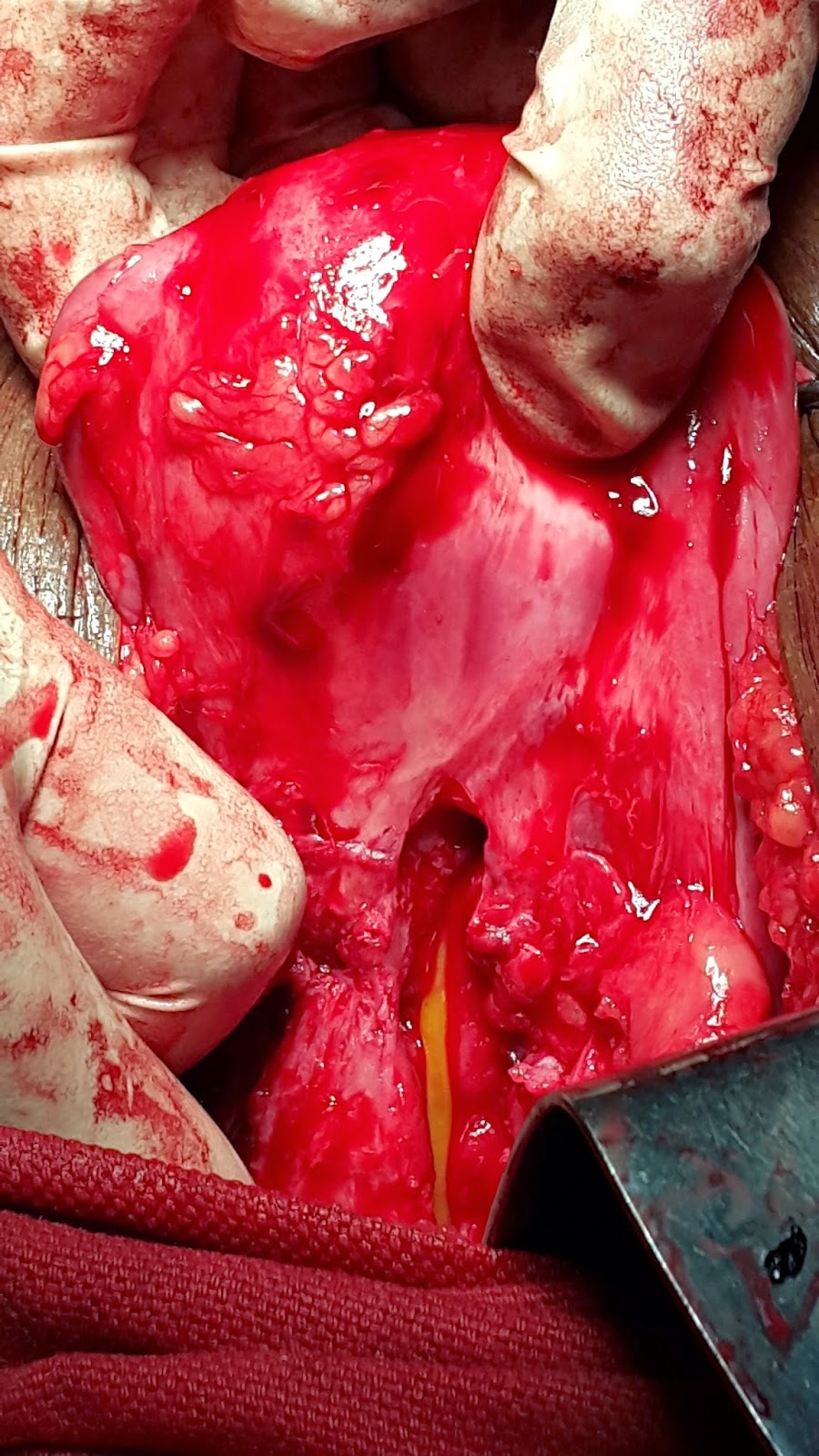 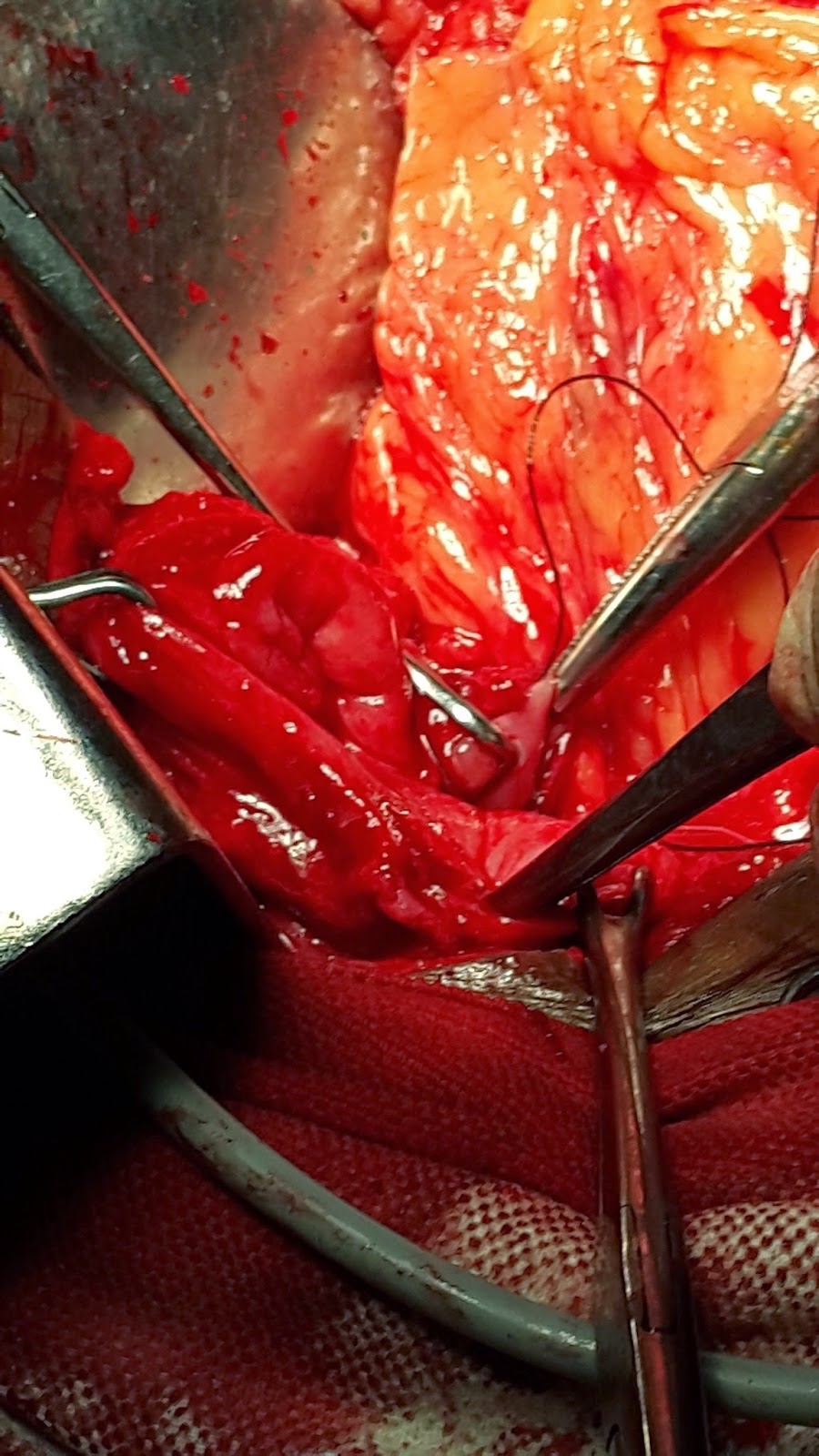 VUF is a rare form of urogenital fistula. Jozwik and Jozwik classified VUF into three types depending on the route of menstrual flow and its location.[3] Type 1 fistula is pre-isthmic in location and manifests as menouria with absence of regular menstrual flow and no incontinence as was seen in our case. Type 2 fistula is isthmic in location and has coexistence of menouria and menstrual flow and Type 3 fistula is post isthmic with urinary incontinence, no menouria and regular menstrual flow. The most common etiological factor for VUF though is lower segment cesarean section, but a variety of other less common causes like pelvic irradiation, pelvic trauma, cervical malignancies, transmigration of an intrauterine contraceptive device, placenta percreta, manual removal of placenta and bladder endometriosis have been reported. A variety of pre-operative imaging methods that have been employed for diagnosis includes ultrasonography, cystography, CT scan, cystoscopy, hysterography and MRI.[4] X-Ray cystography and hysterography are easy to perform, cost effective and provide reproducible images of the anatomy of the genito-urinary fistulas. The various predisposing factors for development of VUF following cesarean sections include repeated cesarean sections which cause adherence of the bladder on the lower segment, inadequate inferior mobilization of the bladder leading to trauma when delivering a deeply engaged fetal head and inclusion of the bladder in the suture line when repairing the lower segment transverse incision or its extension which extends downwards behind the bladder. In our case, the posterior wall of the bladder was adherent to the scar site which probably could have resulted from inadequate inferior mobilization of the bladder as the operation was performed for obstructed labor, and the delivery of the impacted fetal head may have caused a downward tear with associated injury to the bladder and development of VUF. Meticulous surgical principles which should be practiced at cesarean section for preventing genitourinary fistulas include adequate mobilization of the bladder inferiorly by opening the uterovesical fold of peritoneum before taking the uterine incision, making a incision at a higher level for cesarean sections performed in the second stage of labor, opening the peritoneal cavity at a higher point and testing of the bladder integrity when intraoperatively bladder injury is suspected. Surgical repair of the fistula through laparotomy, as performed in our case presented here has been the traditional management modality with very good results. The use of omental flap for repair promotes vascularization  and healing, and should be used for big defects. Recently minimal access surgery which includes laparoscopic repair and cystoscopic fulguration of the fistulous tract have also been recommended as treatment modalities.[5] Meticulous surgical practices will prevent development of  VUF  and  a  high  index  of  suspicion  for  bladder  injury  intraoperatively  will  lead  to  early diagnosis and proper management of VUF thereby decreasing the associated physical, social and psychological problems related to it.