Pregnancy in non communicating rudimentary horn of a uterus is an extremely rare form of ectopic gestation. Rudimentary horn is a rare type of mullerian duct anomaly, difficult to diagnose and carries grave consequences for the mother and fetus. It consists of relatively normal appearing uterus on one side with rudimentary horn on other side. We present a case report of  a 22 year old  primigravida with failed attempts at termination of pregnancy in rudimentary horn at 16 weeks of gestational age for which a laparotomy was done and the rudimentary horn was excised. The need for a high index of suspicion and the role of ultrasonography in the accurate diagnosis is highlighted.

Unicornuate uterus is a rare mullerian congenital anomaly occurring due to fusion defects. 40-50% cases have associated urinary tract anomaly. The First case of rudimentary horn was described by Manricean in 1669.[1] The incidence of unicornuate uterus in general population is about 5%. Rudimentary  horn pregnancy (RHP) occurs in approximately 1/76000 to 1/150000 pregnancies.[2] Conception in rudimentary horn is rare, the possible explanation for RHP to occur is transperitoneal migration of fertilized ovum or sperm from contralateral tube through abdominal cavity, in case of a noncommunicating horn.[3,5,6] RHP in 80-90% cases presents as rupture of pregnant horn during second or third trimester with life threatening hemoperitoneum, in 10% continues till term and in 2% presents as salvageable fetus. It is associated with high rate of spontaneous abortion, preterm labour (in case of communicating horn), intrauterine growth restriction, intraperitoneal hemorrage and uterine rupture.[4] Because of varied muscular constitution in thickness and distensibility of the wall of the rudimentary horn, pregnancy is accommodated for a variable period of gestation.

A 22 year old primigravida, with 4 months of amenorrhea, was referred to our emergency department from some private clinic for failure of induction of abortion with misoprostol. She presented with no complaints of pain in abdomen or bleeding per vaginum despite the administration of misoprostol. A transabdominal ultrasound (USG) scan revealed a 16 weeks intrauterine fetal demise in right horn of uterus. On Examination, her vital parameters were stable with pulse 88/min and blood pressure 120/80 mm Hg. Per abdominally her uterus was just palpable with no tenderness. On per speculum examination cervix and vagina were healthy. On vaginal examination two horns of uterus were felt with the right horn of 14-16 weeks’ size. All investigations for fitness for anesthesia were found to be within normal limits. An exploratory laparotomy was done which revealed pregnancy in an intact right rudimentary horn of size 15X15 cm. There was no haemoperitoneum.The horn appeared non communicating with  the uterine cavity. The rudimentary horn with right tube was excised. Myometrial suturing was done at the site of resection of the horn. Both kidneys were normal in size on palpation. Complete hemostasis was achieved and the abdomen was closed in layers. The cut section of horn showed a macerated fetus of about 14-16 weeks, with cord and placenta. The postoperative course was uneventful and the patient was discharged a week later. 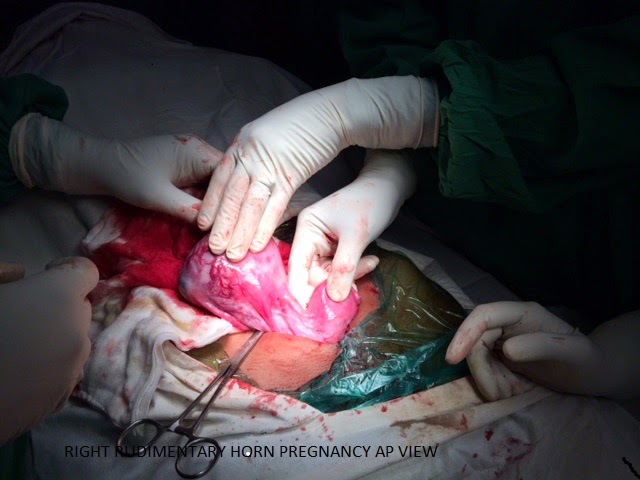 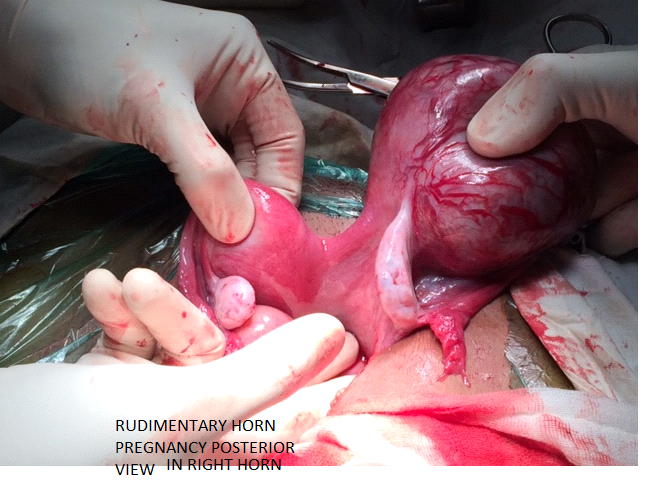 Figure 2. Right rudimentary horn pregnancy, posterior view. The apparently large gap between the ovary and the fallopian tube on the right side is due to the right fallopian tube being stretched over the upper surface of the gravid horn (not seen in this view).

Difficulty in diagnosis of RHP during early pregnancy is quite common as there are no definite signs to distinguish this abnormal implantation from normal intrauterine pregnancy. Accurate diagnosis is possible only after laparotomy. Sonographic criteria for early diagnosis of RHP include a pseudopattern of an asymmetrical bicornuate  uterus, absent visual continuity between the cervical canal and lumen of the pregnant horn, and presence of myometrial tissue surrounding the gestational sac.[1] These criteria can help differentiate suspected RHP from cornual pregnancy, intrauterine pregnancy and pregnancy in a bicornuate  uterus. Magnetic resonance imaging may have a major contribution to the diagnostic evaluation when pregnancy in a rudimentary horn is suspected. It offers multiplanar images without the hazards of ionizing radiation, is non-invasive and is able to show both the internal and external uterine structure. Thus early diagnosis of RHP remains challenging.
The management of RHP is laparotomy and surgical removal of the pregnant horn to prevent rupture and recurrences. The fallopian tube on the side of the rudimentary horn must be removed in order to avoid tubal pregnancies. There are instances of modern techniques for management of rudimentary horn pregnancy like laparoscopic excision of rudimentary horns.[7,8] Laparoscopic management is the most accurate diagnostic tool that allows efficient surgical management thereby avoiding laparotomy. Medical management with methotrexate provides another treatment option and it can be a useful adjunct to surgical intervention, provided beta-hCG level is not more than 6000 mIU/ml.[9,10]

Non communicating rudimentary horn pregnancy is a rare entity associated with life threatening consequences. Early diagnosis and early interventions will avoid maternal morbidity and mortality. These patients are advised to be screened for urinary tract anomalies with preoperative intravenous pyelography. A complete USG examination should be performed on the aspect of the pregnancy and the pelvic anatomy. If USG remains inconclusive, the use of magnetic resonance imaging is suggested. Non communicating horn should be suspected whenever difficulty is encountered during termination of pregnancy. It is easy to miss this condition both clinically and radiologically. Above case highlights the need for high index of suspicion to diagnose rudimentary horn pregnancy.