Phocomelia is an uncommon congenital malformation of the fetus, after the ban on the use of thalidomide during pregnancy.

The word phocomelia is derived from the Greek words ‘phoco’ meaning seal and ‘melia’ meaning limb. Phocomelia is a very rare congenital disorder involving the upper, lower or all limbs. It is characterized by extremely shortened or even absent proximal and mid portions of the limbs. The fingers may be fused together. In extreme cases the hands and feet may be directly attached to the trunk (tetraphocomelia). Its causes include intrauterine exposure to thalidomide, autosomal recessive inherited condition or sporadic change in the gene, Roberts syndrome, Grebe syndrome, von Voss-Cherstvoy syndrome, and Schinzel-phocomelia syndrome. We present a case of second trimester abortion in which the fetus had phocomelia.

A 30 year old woman, married for 10 years (non consanguineous), gravida 5, para 2, living 2, spontaneous abortion 3 with 5 months of amenorrhea, was referred from a private maternity home in view of ultrasonography suggestive of intrauterine fetal demise of 18 weeks and with a cystic hygroma at the neck. She was treated with tablet misoprostol 800 μg per vaginally for termination of pregnancy at the private nursing home, but was later on referred to our hospital in view of platelet count of 95000/cubic mm. Her obstetric history was as follows.
G1: female child of 8 years,full term normal delivery at home.
G2: female child of 6 years,full term normal delivery at home.
G3: spontaneous abortion at 2 months amenorrhea, check curettage done.
G4: spontaneous abortion at 2 and 1/2 months amenorrhea, check curettage done.
G5: spontaneous abortion at 3 months amenorrhea,check curettage done
G6: present pregnancy
Her hemoglobin was 14 g/dl, white cell count 16,000/cmm, platelet count 136000/cmm, blood urea nitrogen 8.7 mg%, serum creatinine 0.7 mg%, fasting blood sugar 97 mg%, post lunch blood sugar 105 mg%, VDRL negative, aPTT-31.5 sec(T), 30 sec(C), lupus Anticoagulant/anti cardiolipin antibodies absent, T3-101, T4-10.2, and TSH 4.4 μIU/ml. Endocrinological reference was done. No intervention was advised for elevation of TSH. Abdominopelvic ultrasonography showed intrauterine fetal death at 18 weeks and a cystic hygroma. The process of termination continued and patient aborted with three more doses of tablet misoprostol 400 μg every 4 hours. The abortus was found to have short limbs, protuberant abdomen, and neck swelling (figure 1). Its sex could not be determined. It weighed 145 g. The placenta weighed 185 g. Fetal biopsy and karyotyping could not be done as relatives were not willing for the same. A clinical diagnosis of phocomelia was made. Placental histopathology showed chorioamnionitis. 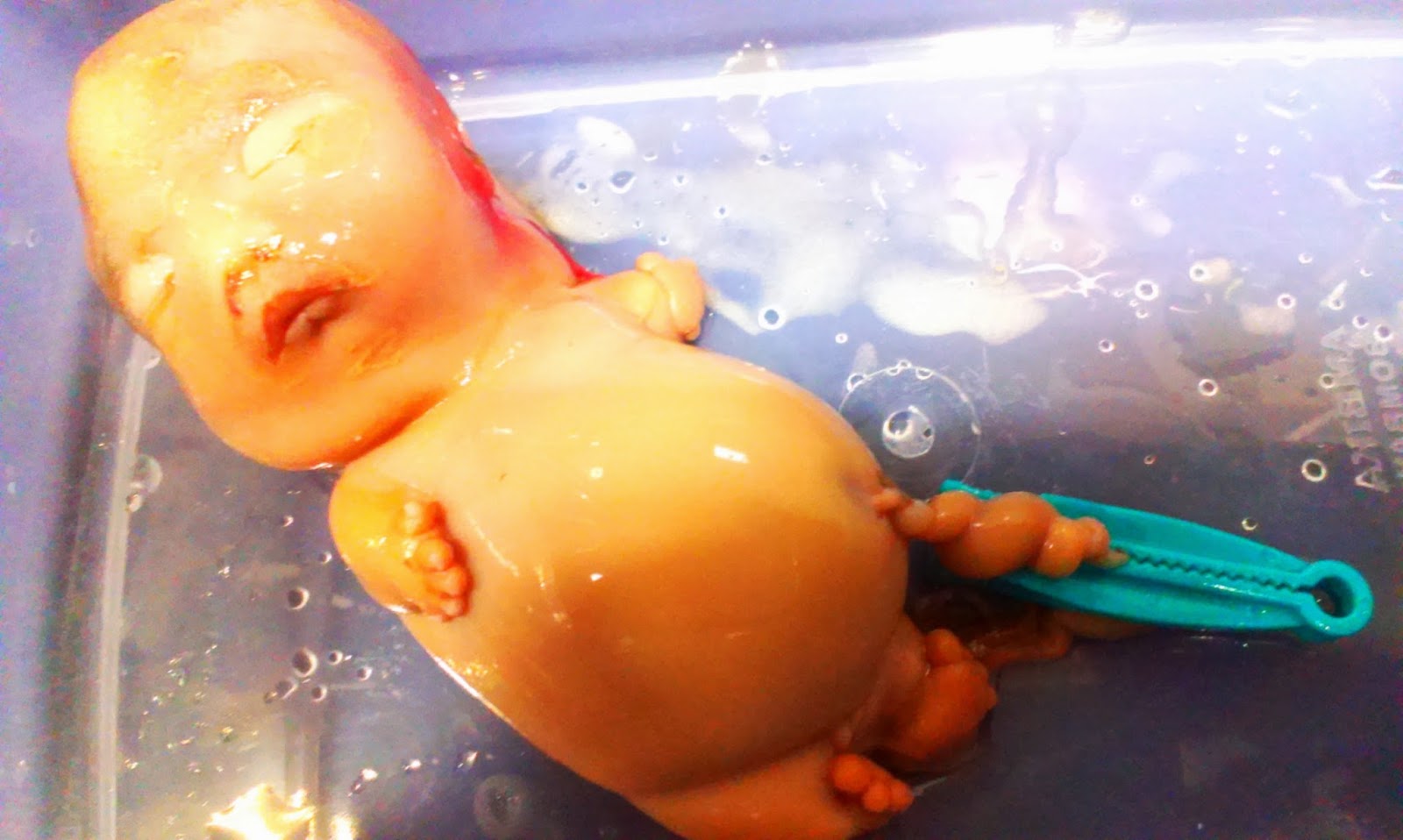 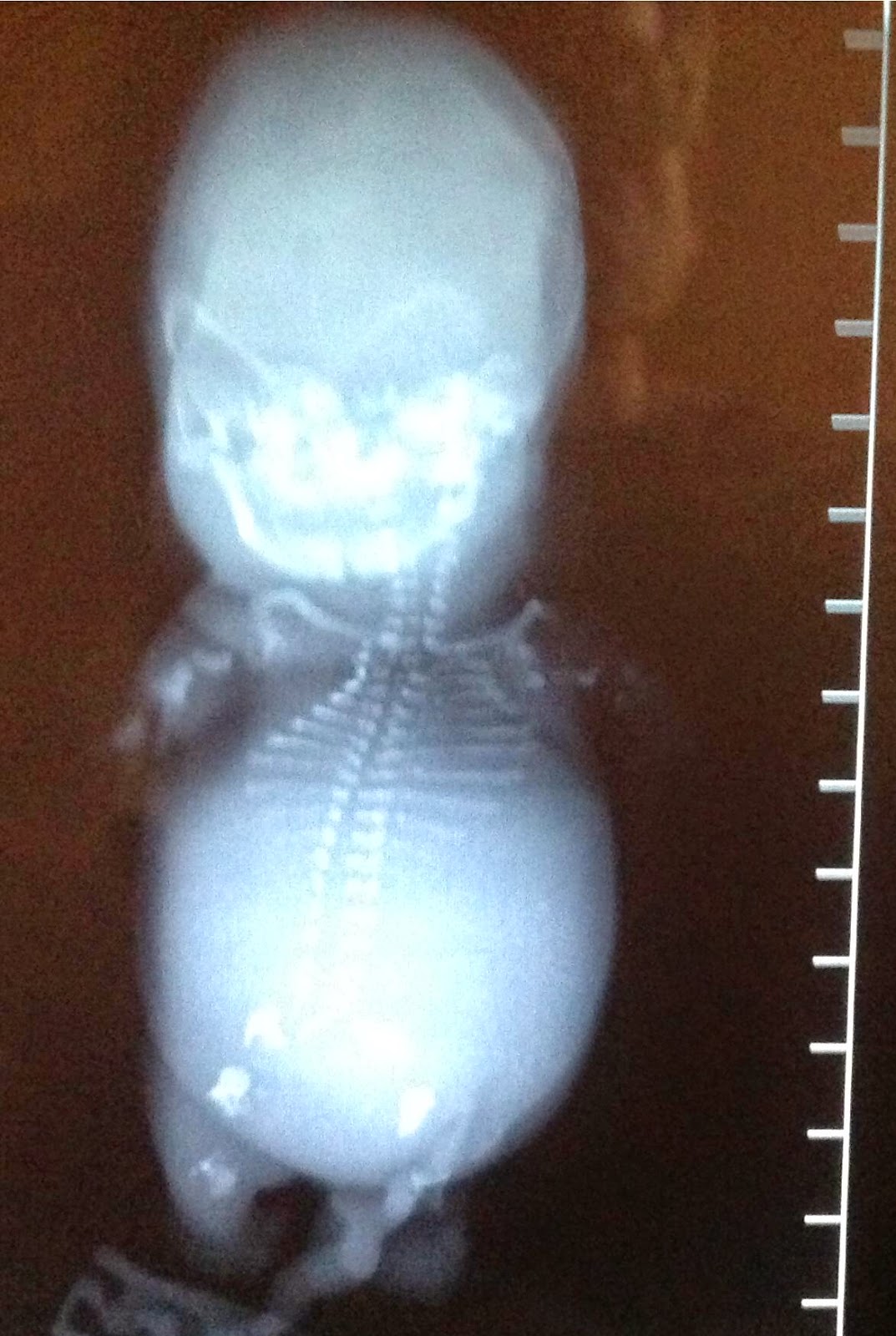 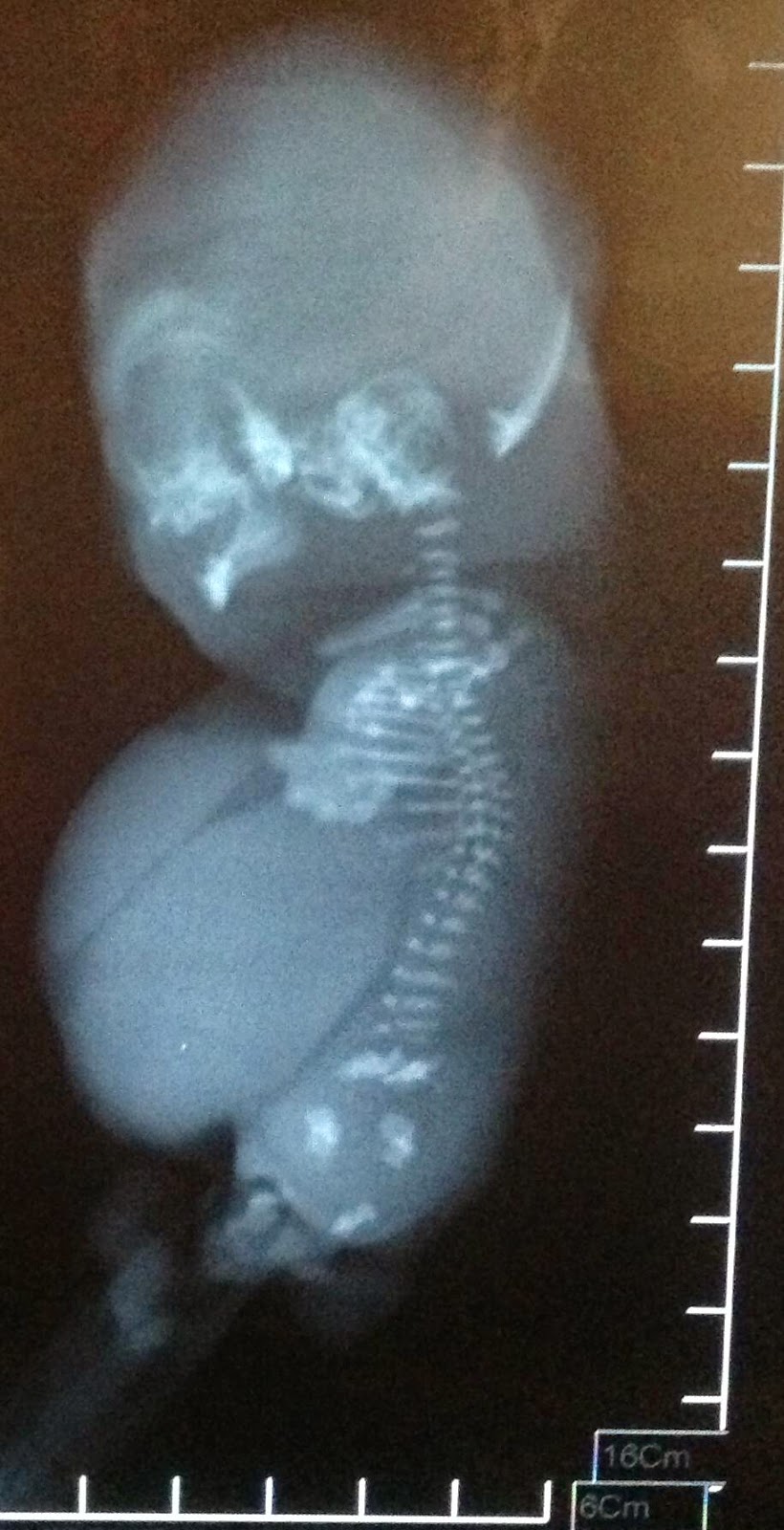 Phocomelia can be caused by intrauterine exposure to thalidomide. In addition, there might be club feet, polydactyly, facial abnormalities, microphthalmia, congenital cardiac anomalies, and intrauterine fetal growth restriction.[1] It was seen mainly from 1957 to 1961, when thalidomide was used to treat nausea and vomiting in pregnancy.[2] The risk of embryopathy due to exposure to thalidomide in the first trimester is 10-50%. However the use of this drug in pregnancy is contraindicated now, and cases of phocomelia due to thalidomide are not seen in modern times. The drug is used for erythema nodosum leprosum, and accidental ingestion of the drug during pregnancy is a possibility. Our patient did not have any history of ingestion of this drug, neither intentionally nor accidentally.
Roberts Syndrome is inherited as an autosomal recessive condition.[3,4] It has intrauterine growth restriction, asymmetrical limb reduction, silvery blonde and sparse scalp hair, microcephaly, hypertelorism, exophthalmos, congenital cataracts, coloboma, hypoplastic nasal alae, midfacial cleft, facial haemangioma, bilateral cleft lip or palate, dysplastic ears, brain malformations, renal malformations, renal dysplasia, cardiac anomalies, genital malformations, and hypogonadism. Our patient had no family history of phocomelia, and the fetus did not have any of the malformations visible externally. A necropsy was not permitted by the parents, so that internal organ anomalies could not be checked.
Grebe syndrome is inherited recessively, caused by a mutation in the gene encoding cartilage-derived morphogenetic protein-1.[5] The axial skeleton is normal, the limbs are severely shortened and deformed (humeri and femora relatively normal, the radii/ulnae and tibiae/fibulae were short and deformed), fused carpal and tarsal bones, many metacarpal and metatarsal bones absent. Our case did not have this syndrome, as the femora and humeri were not normal.
Von Voss-Cherstvoy syndrome is an early lethal multiple congenital anomaly syndrome characterized by phocomelia of upper limbs, variable brain anomalies, encephalocele, vertebral and ribs anomalies, urogenital abnormalities, and thrombocytopenia.[6] Our case had affected lower limbs and did not show any other features of the syndrome.
Schinzel-phocomelia syndrome (limb/pelvis-hypoplasia/aplasia syndrome) shows limb defects due to hypo- or aplasia of long bones unusual facies, pelvic defects, dislocation of hip, hypoplasia of iliac bone, aplasia of pubic bones, thoracic deformity, and genitourinary anomalies.[7] Our case did not show these features.
Phocomelia may be seen in families, the inheritance being autosomal recessive. There was no family history of this disorder in the case presented. It can occur sporadically due to gene mutation. This appears to be the case in our patient.