A 23 year old unmarried woman presented to the outpatient department with complaints of primary amenorrhoea with cyclical abdominal pain for 5 years. The pain was of a dull aching nature lasting for 3-4 days occurring cyclically every month. It was not associated with vomiting or gastrointestinal complaints. There was no history of delayed menses in her siblings or mother,  delay in development of secondary sexual characteristics, fever, sore throat or urinary complaints. No other medical or surgical history. General and systemic examination revealed no abnormality. Breast development was of Tanners stage V. Axilllary and pubic hair was normal. The abdomen was soft and supple. Her external genitalia and external urinary meatus were normal. The vagina was 1cm in depth, ending as a blind pouch. Rectal examination showed a firm nodule measuring 3 cm in diameter. Cervix was not felt. All routine blood investigations within normal limit. Serum biochemistry within normal limits.
Serum FSH was 4.37 mIU/ml, LH 16.7mIU/ml and prolactin 10.20 ng/ml. Abdominopelvic  ultrasonography showed the uterus measuring  5.3x2.7x3 cm,  normal  right ovary and a cyst measring  5.3x5.2 cm in the left ovary. The kidneys and urinary tract were normal. There was some free fluid in in the pouch of Douglas. Magnetic resonance imaging (MRI) showed a bulky left ovary with a 54x50x60 mm well defined hemorrhagic cyst. Another cyst was noted superior to this cyst. The uterus was displaced to the left by the cyst. The cervix was not seen. The  right ovary was normal. A diagnosis of hypoplastic cervix with left ovarian endometrioma was made. 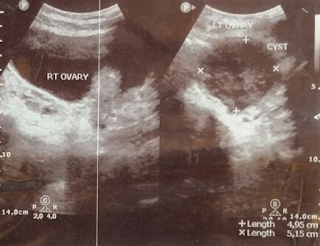 Figure 1. Ultrasonography of pelvis: The left ovary shows a complex cyst, while the right ovary is normal. 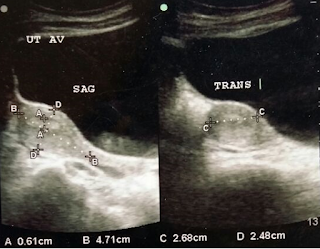 Figure 2. Ultrasonography of pelvis: The uterus (B-B in sagittal view, C-C in transverse view) has some blood in it. The cervix and upper vagina are absent.

The patient and her relatives were counselled about the need for removal of the endometrioma and hysterectomy in view of cervical atresia. However they opted for only removal of the endometrioma. Investigations for fitness for surgery showed results in the normal range. A laparotomy was performed. The findings are shown in figure 1. There was a bicornuate uterus with atresia of the cervix and upper vagina. The two uterine horns were separate, connected by a crescentic fibrous band in the coronal plane. The left horn measured 5x5 cm and was soft, cystic. The right horn measured 3x2 cm and was firm. Both fallopian tubes were normal. Left ovary was replaced by a 5 cm diameter cyst, adherent to the sigmoid colon by flimsy adhesions. The adhesions were separated. The cyst ruptured during enucleation and thick, pultaceous, gray odorless, purulent fluid. It was sent for microbiologic study and for TB-PCR test. The cyst lining was peeled off, and the ovary was reconstructed. Peritoneal wash was given with normal saline. Salmonella typhi was grown from the fluid. The patient was treated with ceftriaxone, gentamicin and metronidazole postoperatively. The same antibiotics were continued after obtaining the culture report because the patient was well and did not have any symptoms and signs of intraperitoneal or any other sepsis. She recovered fully. Histopathology of the cyst confirmed the diagnosis of ovarian endometrioma. 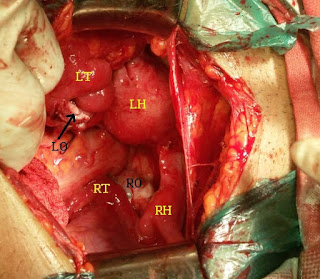 Salmonella can cause gastroenteritis, enteric fever, septicemia and localized suppuration. Salmonella is rarely the causative organism in an ovarian abscess. It reaches the ovary either directly from bowel in contact with it or by hematogenous route. In most of the cases there are predisposing factors like ovarian simple cyst,  endometrioma, benign cystic teratoma, or cystadenoma.[1,2,3] Wang et al reported an ovarian abscess secondary to an enteroovarian fistula. [4] Usually Salonella infection is symptomatic. But Kemmann et al reported a case of an ovarian endometrioma which grew Salmonella, when the patient had no features of sepsis.[5]
In the case presented, the patient had cervical and upper vaginal atresia and bicornuate uterus. The left horn was functional and obstruction to drainage of menstrual blood probably resulted in pelvic endometriosis by retrograde spill. The left ovary had developed endometrioma. The left uterine horn was not functional. Pelvic infections are usually ascending. But that was not possible in this case because there was no communication of the pelvis with the exterior. She did not have any gastrointestinal infection or Salmonella septicemia. Hematogenous spread of Salmonella to the ovary from a past forgotten infection might have remained dormant and manifested later in this case. The patient was fortunate in not getting infection of her left hematometra, either preoperatively or postoperatively. It is quite likely that she will develop more lesions of endometriosis. The left uterine horn was placed quite high in the pelvis and pulling it down for creating a new cervix and opening it into a neovagina was not possible. She would have done better by undergoing removal of the left hematometra. But she wanted to retain the uterus despite extensive counseling. It is likely that she may require another surgery for her progressive hematometra.  She has been advised to follow up regularly and have abdomino-pelvic ultrasonography at least every 6 months, so as to detect progression of the hematometra and pelvic endometriosis. If she does so, further surgery can be offered.

We than Dr Shreshthaqa Mahanti for taking operative photograph.