Torsion Of A Paraovarian Cyst

Paraovarian cysts are difficult to be differentiated from ovarian cysts clinically, and even on imaging. Their torsion is rare. But if not diagnosed and treated in time, there can be permanent loss of the fallopian tube and ovary of the same side due to ischemic necrosis. We report a case of torsion of a left paraovarian cyst in a 24-year-old girl.

Paraovarian cysts account for approximately 5 % of adnexal cysts.[1] Most paraovarian/ paratubal cysts are non-neoplastic distended remnants of the mesonephric duct, paramesonephric duct or mesothelium of the broad ligament. They are unilocular, thin walled, containing clear fluid. They are usually small, though rarely they may attain a large size and cause abdominal pain.[2] Women with paraovarian cysts are most commonly asymptomatic. Rarely they may present with complications such as hemorrhage, rupture or torsion.  Infrequently, adjacent structures like the ovary, fallopian tube or infundibulopelvic ligament may undergo torsion with it. We present a case of a paraovarian cyst torsion with four turns, in which both the ovary and fallopian tube were conserved successfully.

A 24-year-old nullipara, married for 8 months, came with complaints of pain in abdomen and 2-3 episodes of vomiting since one day. These complaints were relieved on giving analgesics and antiemetics. The patient had no other symptoms. She was postmenstrual. Her medical and surgical history was noncontributory. Her vital parameters were within normal limits. The general and systemic examination revealed no abnormality. On abdominal palpation, there was no tenderness, guarding or rigidity and no mass was felt. On per speculum examination, the cervix and vagina were healthy. On per vaginal examination, a mass of 5-6 cm diameter was felt in left anterior fornix, which was smooth, firm and slightly tender, and the uterus was displaced to the right and posteriorly. Ultrasonography (USG) revealed a left paraovarian cyst of 9.4 x 4.6x 7 cm. The left paraovarian vessels showed low resistance flow in the ovarian artery and normal flow in veins, indicating no occlusion of blood flow to the left paraovarian cyst and adnexal sructures. The patient’s investigations for fitness for anesthesia showed normal results. An exploratory laparotomy was performed. A left paraovarian cyst of 6-7 cm diameter was found which had undergone torsion with 4 twists, along with the distal part of the left fallopian tube. The part of the fallopian tube adjacent to the cyst was congested. Both ovaries and the uterus were normal. The torsion of the cyst was reversed by untwisting the turns, the cyst was separated from the cyst wall and sent for histopathology.  The redundant cyst wall was excised and mesosalpinx reconstructed with polyglactin 1-0 in simple interrupted sutures. The left fallopian tube was congested but viable. So it was preserved. The patient made an uneventful recovery. Histopathological examination of the cyst confirmed the diagnosis of torsion of a paraovarian cyst. 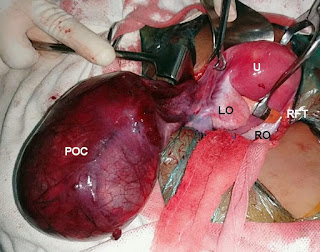 A paraovarian cyst arises from the mesothelium of the broad ligament, remnants of mesonephric duct, or remnants of paramesonephric duct.[3] Torsion of a paraovarian cyst is rare. It is more common in the reproductive age group and three times more common during pregnancy because the cyst gets elevated out of the pelvis due to growth of the uterus.[4] As the cyst lies in broad ligament and has no pedicle of its own, when it undergoes torsion, the ipsilateral fallopian tube and ovary being close to it, may also undergo torsion along with it. It is difficult to differentiate between paraovarian cyst and ovarian cyst clinically. USG and magnetic resonance imaging (MRI) are useful in making the diagnosis, though sometimes the diagnosis may be difficult even with imaging.[5,6,7] A high index of suspicion and prompt surgery is recommended to salvage the fallopian tube and ovary. Other complications of paraovarian cysts include hemorrhage, rupture, infection and neoplastic change. Previously it was believed that untwisting the adnexa could lead to increased risks of thromboembolism. Presently, there is growing evidence that unwinding the involved adnexa to observe for tissue reperfusion and viability is safe.[5] McGovern  et al reported that the occurrence of pulmonary embolism was 0.2 % in cases of adnexal torsion, and these cases were associated with adnexal excision, none to untwisting of the pedicle.[6] The adnexa may be preserved regardless of their appearance following detorsion. A functional integrity and subsequent pregnancy has been reported in almost 95%, with no increased postoperative morbidity.[7] Thus, resection of the associated cyst and salvage of the involved adnexa are the treatment goals.