Omphalocoele is characterized by failure of return of viscera into the abdomen after physiological mid-gut herniation.[1] It can be reliably detected on routine anomaly scans done between 16-18 weeks and the prognosis of the baby is fairly good. Here is a case of omphalocoele in a baby with unusual content of fundus of urinary bladder.

A 22 year old, third gravida, first para G3P1L1MTP1 with previous one full-term normal delivery and one first trimester medical termination of pregnancy was referred to us at 22 weeks of gestation from a peripheral maternity home in view of 2nd trimester anomaly scan showing polyhydramnios with ventral hernia defect, suspected to be an omphalocoele. The fetus was of 22 weeks on biometry. The amniotic fluid index was 20. There were multiple umbilical cord cysts.  She registered with us and followed up regularly for antenatal check-ups until term. She had no significant history of major medical or surgical illness in the past and all her other antenatal investigations were within normal limits. She presented at 37 weeks with complaints of pain abdomen and leaking per vaginum since 4 hours. On examination vitals were stable, cardiovascular and respiratory system examination was within normal limits. On per abdomen examination, the uterus was full term cephalic presentation with activity of 2-3 contractions per 10 minutes, each lasting for 20-30 seconds . She progressed spontaneously in labor and delivered  vaginally a female child weighing 2.120 kg with Apgar of 9/10. On post-delivery examination, the umbilical cord was found to be grossly dilated and edematous, with three vessels visible on gross examination. Umbilical cord at maternal end was normal in morphology for around 5-6 cm followed by gross dilatation up to full length of umbilical cord that is around 40 cm. There were no cysts in the umbilical cord. Placenta and membranes were expelled spontaneously. Active management of third stage of labor given and no postpartum hemorrhage was noted.

The baby was suspected to have loop of intestine at the fetal end of cord - an omphalocoele major - that was covered with amnion and membranes. A pediatric surgical reference was made. A diagnosis of an omphalocoele major was made. It was repaired on day 4 of life. The upper end of the urinary bladder was found in the omphalocele. The baby made an uneventful recovery and was discharged on day 10 of life with a per-urethral catheter in-situ. Histopathlogy report of the wall tissue as excised during the surgery of the neonate revealed features consistent with bladder wall. The Wharton’s jelly in the umbilical cord was found to be edematous. There were increased syncytial knots. 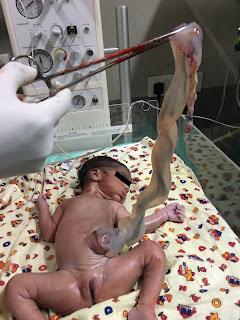 Figure 1. The neonate with edematous cord and the proximal end of the cord showing omphalocoele sac with contents.

The contents of omphalocoele include loops of intestine and liver in 1/10000 and loops of intestine alone in 1/5000.[1] In the above-mentioned case, immediate post-delivery the presence of loop of intestine was suspected in the omphalocoele. In the case presented here, the contents of the omhalocele was the fundus of the urinary bladder. The presence of the urinary bladder in the omphalocoele sac is incredibly rare and has hardly ever been documented. Other unusual features in this case were edematous Wharton’s jelly and increased syncytial knots.
Omphalocoele must be differentiated from gastroschisis. It is seen in 1:20000 cases. It has the paramedian body wall defect and is associated with a worse prognosis than the former. Gastroschisis lacks the protective membrane over the intestinal contents and hence is associated with intestinal atresia.[2]
Abdominal wall defects involving the urinary bladder almost always show an extrophy of the bladder rather than inclusion of the urinary bladder in the omphalocele sac,[3] as was found in our case. The other possible differential diagnosis could be persistent urachus which results from the failure of closure of allantoic duct and is usually associated with bladder outlet obstruction. It is also associated with edematous umbilical cord as in the case presented.[4] However that is usually associated clear yellow urine-like fluid discharging from the umbilicus which was absent in this case.[4]
Majority of omphalocoele have been associated with congenital syndromes such as Beckwith-Wiedemann Syndrome, chromosomal anomalies such as trisomy 13 and 18 or multiple non-chromosomal anomalies such as musculoskeletal or cardiovascular defects. Isolated omphalocoele, as in this case, has a good prognosis with survival rates as good as more than ninety percent. [5] Gastroschisis, on the other hand, usually doesn’t have associated anomalies.[1]