Hysterectomy is the most frequently performed major gynecological surgery. A case of post hysterectomy vault granulation tissue with persistent spotting and pain, undiagnosed for a period of two years, is discussed below.

The rate of hysterectomy in India varies from 4-6 % in contrast to other countries where it varies from 10-20 %. The most common indications for a hysterectomy in India are menorrhagia, uterine prolapse and fibroid uterus. Post hysterectomy, bleeding at the vault site is an early post-operative period complication. However, delayed spotting or bleeding may arise due to multiple causes, among which vault granulation tissue amounts to 34 %. [1]

A 40 year old, P4L4 with history of vaginal hysterectomy with anterior colporrhaphy and posterior colpoperineorrhaphy done at a private hospital in 2016 presented to us with intermittent spotting per vaginum since 2 years. She had followed up after the operation in the same hospital with complaints of pain and spotting per vagina. Examination done at that time was suggestive of an intact vault with minimal slough. She was advised vaginal douching, and to keep povidone iodine vaginal pessaries. However, she was not completely relieved of her symptoms and had multiple follow up visits for the same. During each of these visits, she was given the same symptomatic treatment.
She later presented to us with similar complaints. On examination, general condition was fair, vital parameters were normal. On systemic examination, abdomen was soft with scar of mini-laparotomy tubal ligation. On speculum examination, large fragile granulation tissue of about 2x2 cm size was seen at the vault. Two bunches of linen sutures were seen in the right angle of the vault and these were removed. The fragile granulation tissue was sent for histopathology (figure 1).
The histopathology report was suggestive of inflammatory granulation tissue. She was advised to follow up if symptoms persisted or increased. She visited us again after 15 days with similar complaints. Electrocauterization of the granulation tissue was done.
She was advised to follow up after fifteen days. She did not follow up, presumably because she got relieved of her symptoms. 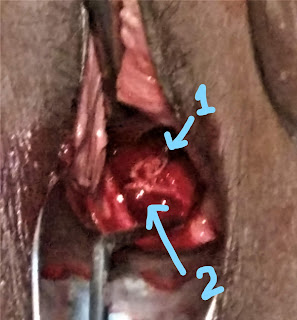 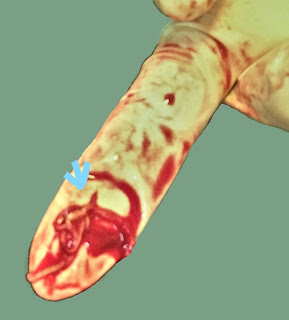 Hysterectomy is one of the most widely done gynecological surgeries. Like any other surgery, it has its own set of post-operative complications. In our case, the patient had undergone a vaginal hysterectomy with anterior colporrhaphy and posterior colpoperineorrhaphy for uterine vaginal prolapse, following which she had persistent spotting and pain not responding to conservative management. The differential diagnosis for this is based on the clinical examination and time of presentation.

The causes of vaginal bleeding in a post hysterectomy patient could be either immediate or delayed. The most common cause of immediate bleeding from the vault is a hematoma. Other causes are fimbrial prolapse, endometriosis, granuloma, etc. The delayed complications of bleeding from the vault are usually granulation tissue at the vault or a fimbrial prolapse. Fimbrial prolapse is a rare complication. In a study by Pozzi in 1902 two cases of fimbrial prolapse were described after vaginal hysterectomy. In a study by Fan et al, the incidence is found to be 0.1%.[4] These patients present with vaginal bleeding. Grossly, it appears as a red hemorrhagic granular mass, which can be confused with a vault granulation tissue, both microscopically and macroscopically. Clinically, it can be diagnosed by a traction test, in which the tissue if originating from the fimbria will cause pain on traction unlike in a case of granulation tissue which will be painless. A vault biopsy should be done to avoid misdiagnosis in such cases.[5] Vault granulation tissue is a frequently encountered entity. It is seen approximately in one third of the patients who have undergone hysterectomy.[3] The incidence of vault granulation tissue has been found to be 34%, making it more common than a fimbrial prolapse.[2] In a case published by Cha Hien Choi et al, a similar case is discussed, where a patient had presented with bleeding per vaginum after 13 months of hysterectomy and she was diagnosed with vault endometriosis on biopsy, with no prior history of endometriosis.[2] In a study conducted by Manyoda IT et al, the influence of different suture materials on vaginal vault granulation tissue was studied. it showed that, polygalactide, a synthetic polymer, has fewer associations with vaginal vault granulations as compared to chromic catgut.[6] In this case, the suture material seen and removed from the vault angle was linen, which is a non-absorbable, braided multifilament suture material. Traditional linen threads have the most intense histological reaction, leading to cicatrization. The fibrosis forming role of the mastocytes, fibroblasts and histiocytes are seen to dominate with use of linen.[7] Granulation tissue basically replaces all dead, dying and necrotic tissue and replaces it with living mesenchyme. It invades the tissues which are devitalized by ischemia, hence the higher correlation with linen suture material.[8] In this case, as her surgery was a vaginal hysterectomy, the use of non-absorbable sutures is not recommended. Previously, linen sutures were used for trans fixation of upper pedicles, but not for vault closure.

In this case, electro-cauterization of the granulation tissue was chosen as the modality of treatment due to persistent symptoms. Benjamin J et al have discussed a case where carbon di oxide laser has been used as a method of treatment for persistent granulation tissue.[9] In lesions which are small (≤5 mm), it would be advisable to leave them alone as spontaneous regression was seen in such small lesions.[2] In our case, the size was around 2x2 cm, so electrocautery was done.