Abstract
Cervical leiomyomas are rare tumors accounting for 2% of all leiomyomas. We present a case of a large posterior cervical pseudo broad ligament leiomyoma where myomectomy was performed by approaching it by opening the anterior leaf of the right broad ligament.

Introduction
Cervical leiomyomas account for 2% of all leiomyomas and they can originate from either supra-vaginal or vaginal portion of cervix.[1] The former may be anterior, posterior, lateral or central depending on their site of origin. It projects into the vagina if it arises from the portio vaginalis. A leiomyoma arising from lateral aspect of the supravaginal cervix can grow into the broad ligament of the same side, producing a pseudobroad ligament leiomyoma.[2] We present an unusual case in which the leiomyoma arose from posterior part of the supravaginal cervix and grew into the right broad ligament.

Case Report
A 35 years old woman, married for 15 years, para 1 living 1, presented to our outpatient clinic with complaints of pain in the lower abdomen for 2 months. She had no menstrual complaints. She had one male child 12 years back and was delivered by lower segment cesarean section. She was diagnosed to have hypertension 1 year ago and was on Amlodipine 5 mg PO qd. She had no other surgery done in the past. On general examination her general condition was fair and vital parameters were in normal limits. On per abdomen examination there was a infraumbilical vertical midline scar of previous lower segment cesarean section. The abdomen was soft with no tenderness, guarding or rigidity. On per speculum examination the cervix was high up and healthy. On bimanual examination the uterus was 14 to 16 weeks' size and firm. It had a mass of 10 ×8 cm in the posterior wall. Her Pap smear and investigations for fitness for anesthesia gave normal results. On ultrasonography of the pelvis  the uterus measured 13 cm in length and showed a large, ovoid, heterogeneous, mildly hypoechoic 8×7×5.9 cm sized leiomyoma in central and predominately posterior location in the lower body and cervix, with mild increase in intra- and peripheral vascularity. Both ovaries were normal. In view of above findings and patient's desire of retaining her fertility, a myomectomy was performed through an infraumbilical midline incision under spinal anesthesia. Dense adhesions were encountered between the anterior abdominal wall and omentum, which were separated by sharp dissection. The uterus was of normal size. The right fallopian tube and both ovaries were normal. The left cornual portion of the uterus and anterior aspect of the left adnexal structures were adherent to the anterior abdominal wall. These adhesions were separated to facilitate mobility of the uterus. The left fallopian tube couild not be located in the adhesions. A posterior cervical leiomyoma of 10×8 cm was felt posteriorly and was growing into the right broad ligament, stretching the posterior leaf of the broad ligament and reaching the pelvic floor inferiorly. The right ureter was found to be of normal size, away from the leiomyoma. The right round ligament was divided between two hemostats in its central portion and the hemostats were replaced by transfixion ligatures of No. 1 polyglactin. The upper surface of the pseudocapsule of the leiomyoma was exposed by dissecting the peritoneum of the broad ligament away from it. The pseudocapsule was cut longitudinally in its upper part. The leiomyoma was dissected off the pseudocapsule and enucleated after clamping and dividing a leash of blood vessels entering its lower portion. Hemostasis was achieved in the bed of the leiomyoma, redundant part of the pseudo-capsule was excised, the dead space occluded with purse-string sutures at the bottom of the cavity and then the pseudocapsule was closed with sutures of No. 1 polyglactin. The anterior leaf of the right broad ligament was reconstructed by a continuous suture of No. 1-0 polyglactin after approximating cut ends of the right round ligament. The patient made an uneventful recovery. Histopathological examination of the tumor confirmed the diagnosis of a leimyoma. 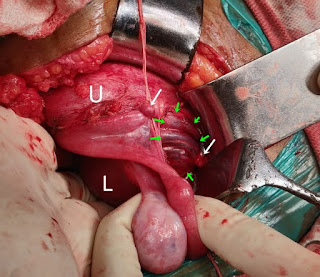 Figure 1. Right round ligament has been divided (arrows) to expose the leiomyoma (green arrows) covered by a number of blood vessels. U: uterus, L: posterior surface of the leiomyoma. 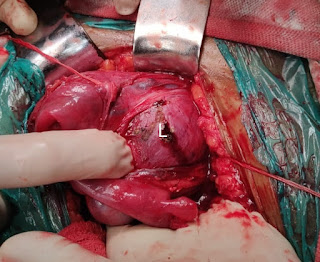 Figure 2. The upper surface of the leiomyoma (L) is exposed. 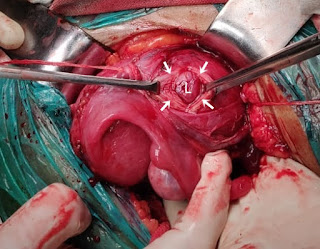 Figure 3. The superior part of the pseudo-capsule is divided (arrows) to expose the leiomyoma (L) within it. 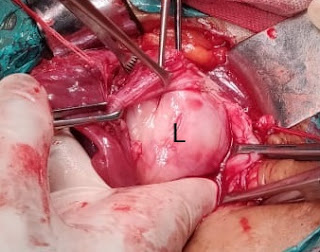 Figure 4. The leiomyoma (L) is being enucleated from within its pseudocapsule. 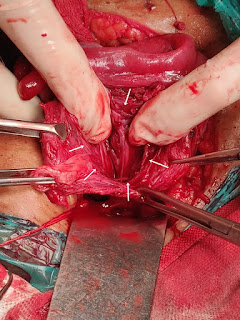 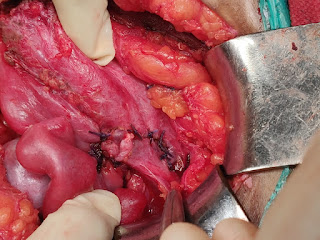 The presentation of cervical leiomyoma usually depend on the location. It can present with symptoms like menstrual irregularities, constipation, frequency of urination, urinary retention, dyspareunia and postcoital bleeding.[3,4] A large size of a cervical leiomyoma can cause anatomical distortion of ureter, bladder and uterine vessels, thereby increasing the risk of injury to these structures.[5] The progression in the number, size and growth of cervical leiomyomas is unpredictable. They usually do not become become cancerous. They are less likely to shrink  on their own until after menopause.