Benign cystic lesions of the vagina are frequently encountered. These are usually found incidentally during gynecological examination. This case deals with the diagnosis and management of posterior vaginal wall cyst.

Vaginal cysts may be embryological derivatives, inclusion tissues or occur due to urological abnormalities.[1] Vaginal cysts are most common in the third and fourth decades of life, and rarely in the prepubertal girls. Various vaginal wall cysts are classified according to the lining epithelium determined by histology.[2] Mullerian cyst is the commonest constituting 30%, Bartholin duct cyst 27.5%, inclusion cyst 25% and rest 17.5%  are constituted by Gartner’s cyst, endometriotic cyst and unclassified variety.[3] These are usually incidental findings but may present with symptoms of mass per vaginum, bladder complaints, dyspareunia, pain or vaginal discharge.[2] 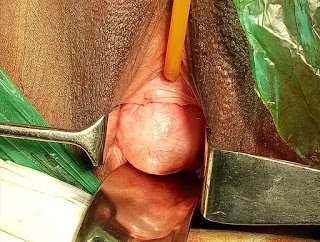 On investigation, biochemical and serological investigations were in the normal range. Hemoglobin was 11.7 gm%, leucocyte count was 7800/ cmm, platelet count was 3,97,000/ cmm, BUN was 10.0 mg %, serum creatinine was 1.1 mg%, SGOT was 18 U/L, SGPT was 12 U/L, and TSH was 0.55 µIU/ml. On transvaginal sonography, a well defined cystic lesion with anechoic contents measuring 4.5 x 4.1 x 5 cm in the upper vagina arising from the right lateral wall, above the level of the symphysis pubis was noted, suggestive of Gartner’s cyst. No evidence of any solid components was detected. Uterus was anteverted with no focal lesion. Bilateral ovaries were normal. Bilateral adnexae were clear. No evidence of free fluid in pelvis was seen. MRI pelvis revealed a well defined cystic lesion measuring 2.9x4.3x6.1 cm which had homogeneous T2 hyper intense and T1 hypo intense signals, in the right lateral and posterior aspect of the vagina in its upper part protruding into the right fornix. The cystic lesion had a well defined T2 hypo intense wall throughout. The most likely diagnosis was that of a Gartner’s cyst. Visualized rectum and anal canal were normal.

She was taken for vaginal cyst excision under spinal anesthesia. Initially the cyst was separated from the vaginal mucosa by sharp dissection but in the process, the cyst ruptured. Cyst wall was separated posteriorly from the recto-vaginal extra pelvic fascia and it was noted that cyst was in very close proximity to the rectum. Cyst wall was separated posteriorly till its upper half and the redundant cyst wall (lower half) was excised. Cyst wall was sent for histopathological examination. Tissue overlying the rectum was sutured in the mid-line with polyglactin 2-0 interrupted sutures. On per rectal examination rectal mucosa was found to be intact. Remainder of the cyst in its upper extent was marsupilised with vaginal mucosa using polyglactin 2-0 sutures. Visualized cervix was normal. She tolerated the procedure and anesthesia well.

Postoperative period was uneventful. She had no urinary or bowel complaints and was discharged on day 10. Histopathology report was suggestive of a benign vaginal cyst. The gross specimen had smooth grey white surface. Sections showed a cyst wall comprising of fibromuscular tissue. No epithelium was seen.

Vaginal wall cysts present in a variety of ways. True vaginal wall cyst arises from the vaginal tissues but lesions that arise from the urethra and surrounding tissues can also present as a cystic lesion in the vagina. History and physical examination alone can make appropriate diagnosis in most cases. Other cases are diagnosed only after excision and pathological examination of the tissue. Through physical examination, the lesion should be assessed for location, motility, tenderness, definition and consistency. The presence of malignancy must always be considered. Prolapse of pelvic organs must be ruled out, as they may mimic a vaginal cyst. Imaging by means of ultrasound, CT, MRI may be required to further categorize the lesion. MRI is found to be invaluable in diagnosing vaginal cyst and various other genitourinary abnormalities.

Mullerian and mesonephric remnants tend to be located along the anterolateral aspect of the vagina, however they can be found in any part of the vaginal wall. Mullerian cysts are lined predominantly by mucinous epithelium but may be lined by any epithelium of mullerian origin. These cysts are usually small and asymptomatic and require no treatment.[4] Gartner’s cysts are usually small but may enlarge to a point where they are mistaken for cystocele or urethral diverticulum. Abnormalities of the metanephric urinary system are also seen with Gartner’s cyst. MRI is especially useful for evaluation of the characteristics of the cyst and of the urinary tract. Cyst excision is only indicated when the cyst is large and symptomatic. Gartner’s duct cysts are found to be lined by cuboidal or low columnar, nonciliated, nonmucinous cells.

Bartholin’s duct cysts typically range from 1 to 4 cm in diameter. The majority are unilateral non-tender cystic masses located in the lateral introitus medial to the labia minora. Cysts arising from the main duct are lined by transitional or squamous epithelium, whereas cysts originating in an acinus are lined by mucinous columnar epithelium.
Epidermal inclusion cysts are the most common non embryological type of vaginal cysts. Inclusion cysts vary in size. Location correlates with an area of previous surgery. On histological examination inclusion cysts are found to be lined with stratified squamous epithelium and they contain sebaceous appearing material that represents desquamated epithelial cells.
Nodules of endometriosis are located at the posterior fornix and appear red-blue to yellow-brown. The patient may complain of cyclical enlargement, dysmenorrhea, dyspareunia, pelvic pain or dysuria. Histologically, 2 of the following 3 characteristics must be seen to make the diagnosis; endometrial glands, stroma and or hemosiderin laden macrophages. Foreign body giant cells may also be found.

Pelvic organ prolapse can present as a vaginal cyst. History and physical examination helps in diagnosis. It is important to determine if a vaginal cyst arises from the vaginal wall or if it is of urethral origin, as excision of certain urethral lesions requires post-operative catheter drainage to prevent fistula formation. A urethral caruncle is seen as a solitary red polypoid lesion protruding from one segment of the urethral meatus. Histopathology consist of a core of loose connective tissue and blood vessels covered by transitional or squamous epithelium. Urethral diverticula are located along the distal two-thirds of the urethra, presenting as anterior vaginal cyst. Histologically, diverticula consist mostly of fibrous tissue, and an epithelial lining is usually absent. If present, the epithelial lining may be transitional or squamous epithelium.
Thus, familiarity with the different diagnosis is essential for any clinician involved in gynecological or female urological practice to arrive at the correct diagnosis and treatment plan.