A patient with a history of 6 weeks amenorrhea, with urine pregnancy test positive and ultrasound scan suggestive of ectopic pregnancy in left adnexa with extensive hemo peritoneum, on laparotomy revealed a primary abdominal ectopic pregnancy. The presentation and management of the case has been described in the case report.

A 26 year old woman, with one previous vaginal delivery, came with complaints of 6 weeks amenorrhea, acute abdominal pain, vomiting and giddiness. On examination the pulse was 100 beats per minute, and blood pressure was 90/60 mm of Hg. Abdomen was tender and appeared distended. Per vaginal examination revealed bilateral cervical motion tenderness. Uterus was six weeks gestation size. Hemoglobin was 8.3 g/dl. Ultrasonography was suggestive of ruptured live ectopic pregnancy of 9 weeks in the left adnexa with hematoma of 350 cc. After consent, in view of ruptured ectopic pregnancy, exploratory laparotomy was done. Intraoperative 650 g blood clots were retrieved with approximately 1600 ml hemoperitoneum. Bilateral fallopian tubes and ovaries looked normal with no evidence of gestational sac (figure 1). Bladder was found densely adherent to fundus and anterior wall of the uterus (figure 2). Appendix was adherent to the right fallopian tube. Rent of about 4 x 3 cm was noted above the left uterosacral ligament (figure 3). Gestational sac was seen adhered to the posterior wall of the uterus near the left uterosacral ligament. A rent on the posterior wall of the uterus was seen after separation of the gestational sac which had bleeding base hence required repair of the rent. This extrauterine pregnancy was not communicating with the uterine /cervical cavity, both adnexa were normal and the gestation sac was deriving its blood supply from its area of implantation; posterior wall of the uterus near the left uterosacral ligament thus suggesting it to be a primary abdominal pregnancy. It also was not a tubal abortion as the tubes were healthy and the gestational sac was extracted from the posterior surface of uterus leaving behind a bleeding vascular surface. Ectopic gestation was removed and a Urologist was called for ureteric tracing due to its close proximity to the raw area and uterine rent repair was done. Uterine curettage that was done due to a thickened endometrium showed an Arias Stella reaction. As initial impression was that of a cervical pregnancy having ruptured intraperitoneally curettage was done. It was noted that there was no communication of the cervical canal with the peritoneal cavity. Four units of fresh frozen plasma and 5 units of packed cell volume were given during the operation. Histopathology of peritoneal contents showed products of conception.
She had a stormy post operative course with shock liver, consequent to intraoperative hypotension. She was administered albumin and liver safe antibiotics. Ascites caused wound dehiscence, but wound cultures did not grow any organisms. The wound healed with secondary intention. She made a gradual recovery and was discharged after 3 weeks with advice about barrier contraceptive. 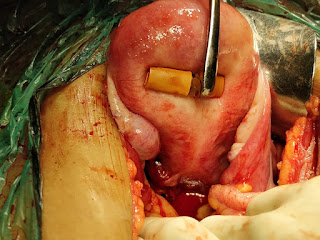 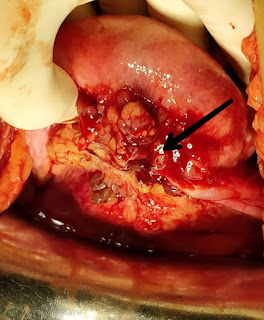 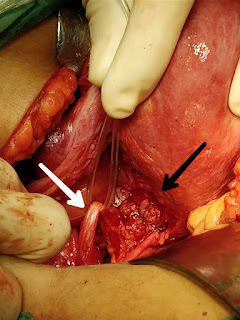 Urine and serum beta-human chorionic gonadotropin (β-hCG) assays and transvaginal ultrasonography have made earlier diagnosis of ectopic pregnancy possible. Although a zygote can traverse the tube and implant primarily in the peritoneal cavity, most abdominal pregnancies are thought to follow early tubal rupture or abortion with reimplantation.[3]
Absence of an intrauterine gestational sac, absence of both an evidently dilated tube and a complex adnexal mass, a gestational cavity surrounded by loops of bowel and separated from them by peritoneum, a wide mobility similar to fluctuation of the sac, particularly evident with pressure of the transvaginal probe toward the posterior cul-de-sac, are the ultrasound diagnostic criteria of an early abdominal pregnancy.[4]
Systemic methotrexate therapy is a safe alternative to surgery in a stable patient with unruptured ectopic pregnancy.[5] Surgical management is the mainstay which may be done by laparotomy and includes removal of ectopic with careful assessment for removal of the placenta thus avoiding the possible torrential hemorrhage as the normal hemostatic mechanism of myometrial contraction is lacking.

Early abdominal pregnancy has similar risk factors to any ectopic pregnancy; these include a previous history of ectopic pregnancy or tubal surgery, endometriosis, history of pelvic inflammatory disease (PID) or current use of intrauterine device.[6] The patient in our case had a previous vaginal delivery. She gave no history of abdominal surgery or uterine curettage. She did not have any complaints or history suggestive of PID yet, intraoperative dense adhesions between urinary bladder and the anterior wall of uterus were seen. Also, appendix was found adherent to the right fallopian tube. Above findings cannot rule out a possibility of asymptomatic PID. Pelvic inflammation or increased vascularity could have created a nidus for implantation, thus explaining the probable cause of placentation into the abdominal cavity near the postero-inferior aspect of the uterus.
There was cervical motion tenderness on bimanual examination and the ultrasonography revealed left adnexal ectopic with significant hemoperitoneum. The above findings were consistent with the intraoperative findings. As the gestational sac was implanted just near the uterosacral ligament not involving the cervical canal or ureter, closure of rent formed after extraction of ectopic could be done satisfactorily. The cervical bottle neck could be felt during curettage.
Even if the incidence of abdominal pregnancy is low, early diagnosis and prompt treatment are essential to avert a catastrophic event. Hence, the treating clinicians must have high index of suspicion and carefully plan the management of all cases of ectopic accordingly.

We thank Dr. Priya Misar for clicking the intraoperative photos.