Uterine scar dehiscence implies breach in uterine wall at the healed scar site with intact overlying serosa. It usually occurs during labor. Merriam-Webster dictionary gives medical definition of dehiscence as ‘parting of the sutured lips of a surgical wound’. Hematoma and sepsis are major causes of dehiscence in an unhealed wound. Postpartum uterine wound dehiscence is a rare phenomenon; mostly caused by fulminant sepsis.
In young women hysterectomy is frequently undertaken for postpartum cesarean wound dehiscence in order to save life. With careful selection of treatment options; it is possible to avoid hysterectomy.

A thirty two year old woman, para 2, living 2 was referred to our tertiary care center for distension of abdomen with nausea and vomiting on the 10th post operative day of elective lower segment cesarean section (LSCS). She had undergone elective LSCS in view of previous LSCS in a private hospital. As per the records, intraoperative course was uneventful and she was discharged on post operative day 4 in good health. On examination in our center, her general condition was fair, she was afebrile, vital parameters were stable. Her pulse rate was 98 beats/ minute. Her abdomen was slightly distended but soft and her abdomen was not guarded. The abdominal incision had healed. Lochia was not foul smelling. Vaginal swab was taken for microbiological examination. She was catheterized and had adequate urine output. Her blood chemistry showed her hemoglobin to be 10 gm%, white blood cell count was 18,800/ mm3, platelets count was 2 lacs/ mm3, prothrombin time was 13.6 with a control of 13.1. International normalized ratio was 1.05. Renal and liver function tests were within normal limits. Her chest X ray was normal. Ultrasonography showed mild ascites with probable hemoperitoneum. Contrast enhanced computerized tomography (CECT) was suggestive of a collection of size 11.2x15.6x10.7 cm3 with approximate volume of 100 ml in the periuterine region communicating with the uterine cavity through a rent of 2.9 cm in the lower uterine segment. She was started on higher antibiotics. The vaginal swab culture didn’t grow any pathogens. Written valid informed consent was taken from the her and her relative for exploratory laparotomy and possible hysterectomy. Surgeons were present for any intervention as required. Spinal anesthesia was given. Her primary incision that was pfannenstiel had an intact skin scar and had healed. Laparotomy was performed with midline vertical infraumbilical incision.  Rectus muscles were inflamed. Peritoneal cavity was filled with yellow purulent foul smelling pus of around 200 ml in volume. Wound edges in the lower segment were completely separated. Peritoneal fluid and endometrial swab were sent for culture and antibiotic sensitivity. Intestines were matted with pus flakes over the omentum. Surgeons confirmed that bowels were intact. Ragged edges of uterine wound were excised and sutured with polyglactin no 1 by continuous locking sutures. Normal saline wash was given, and peritoneal and subcutaneous drains were placed before closing. On day 5 of surgery, she had an abdominal wound gape. The wound swab grew Klebsiella. Antibiotics were changed according to the sensitivity report of pus and abdominal wound culture. Wound was managed conservatively and healed with secondary intention over 4 weeks. She was counseled for permanent contraception and about possible menstrual problems with scar defect in future. 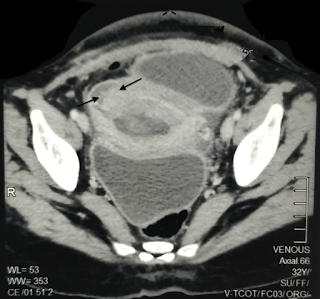 Figure 1. CT scan of abdomen showing periuterine collection of 120 ml communicating with the uterine rent of 2.9 cm. The arrows point to the collection. 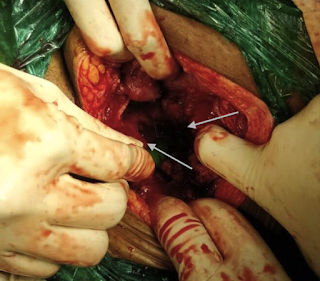 Uterine rupture generally occurs during labor, and mostly in case of previous LSCS cases due to causes like short inter conception period, previous classical cesarean section, abnormal placentation, and or improper oxytocin augmentation of labor.[1] Wound dehiscence is rare and may present as secondary post partum hemorrhage, peritonitis or wound sepsis.[2,3] It mostly occurs due to infection or hematoma. Arab et al quoted numerous risk factors like emergency surgery, compromised immunity, multiparity, obesity, under nutrition and advanced maternal age leading to wound dehiscence.[4] In a post operative case, endomyometritis with peritonitis may indicate communication between uterine cavity and peritoneum due to wound breakdown. If in presence of clinical signs of endomyometritis, free fluid in the peritoneal cavity with pleural effusion is noted on imaging, it indicates probable wound necrosis. Magnetic resonance imaging, due to better soft tissue contrast, is believed to have an edge over CT scan in defining uterine wall complications such as dehiscence.[5,6] Exploratory laparotomy is important for diagnosis and treatment of postoperative uterine wound breakdown and repair. Conservative surgical options include debridement, abscess drainage and resuturing. Bharatam et al propose that in case of endomyometritis and intraabdominal sepsis, hysterectomy should be undertaken. But relatively stable general condition of our patient suggested that repair was a better option. Kwame-Aryee and colleagues reported in their study of peripartum hysterectomies, 6% incidence of post cesarean wound necrosis.[7] Wagner and Bédard propose that if there is clinical evidence of endomyometritis, hysterectomy is better.[8] To confirm endometritis, culture of lochia is widely taken, but these may have limited value.[9] On the other hand, El‐Agwany reported a series of 3 cases of post cesarean wound dehiscence treated conservatively, with fair outcomes.[10] Evaluation of scar should be done after 6 to 12 months of surgery. Hysteroscopy and laparoscopy allows evaluation of scar defect. Counseling of these patients regarding birth spacing and future pregnancies is important due to increased risk of uterine rupture, cesarean scar pregnancy, adherent placenta and dense adhesions. Similarly patients should be explained about gynecological implications like postmenstrual spotting, dysmenorrhea, secondary infertility and chronic pelvic pain.

A high index of suspicion is required to diagnose postpartum cesarean wound dehiscence. MRI has an edge over other imaging modalities. Dilemma does exist in surgical decision making and management is guided by clinical condition and laparotomy findings.