We present a rare case of clitoral cyst with no past history of genital mutilation. A 16 year female presented with swelling on genital region. On examination her genitalia showed significant enlarged clitoris of size 3.2 * 1.8 cm with well-formed glans. She gave similar history with cyst excision 3 years back which had now recurred. She also had no history of genital trauma or polycystic ovarian disease.

The clitoral region is a rare sitefor a cyst to occur. It is usually associated with history of female genital organ mutilation or trauma. Rarely, the cyst occurs in a woman with no history of organ mutilation. Clitoral cyst is one of differential diagnosis of clitoromegaly. Although clitoral cyst is rare in occurrence, few cases have been reported worldwide. However, recurrent clitoral cyst is an extremely rare condition and no case has been reported till date despite an exhaustive literature search. We present one such case.

A 16 year old unmarried Muslim girl, student of class X, had come to us with chief complaints of swelling in private parts since 2 months with mild pain. The swelling had gradually increased from pea size to present lemon size (figure 1), associated with mild pain. No complaints of fever or burning micturition. No history of trauma to private parts. She had history of swelling at the same site 3 years back which was diagnosed as clitoral cyst and it was excised. Histopathology report was suggestive of cyst wall with non specific inflammation. She was investigated to know etiology and for differential diagnosis. Karyotyping, hormonal profile (estradiol, progesterone, testosterone, LH, FSH) were normal. Hence the cause could not be identified. She was asymptomatic until past 2 months when swelling recurred. She attained her menarche at 14 years of age. Her past and present menstrual cycles have been regular with cycle length of 28+2 days, bleeding for 3-4 days, moderate blood flow with no dysmenorrhea. On general examination she was thinly built, secondary sexual characters were well developed. There was no evidence of defeminization or virilization. On local examination labia majora and minora were normal, urethral opening and vaginal vestibule were in their anatomical position and were normal, a central, spindle shaped swelling of 3*4 cm was present, cystic in consistency, mobile and not tender to touch was present on the right side of the clitoris and the clitoris was deviated to the left. Our provisional diagnosis was a clitoral cyst. Her biochemical and serological investigations were within normal range. Urine was pale yellow in color, clear in appearance with 0-1 pus cells/ hpf and no red blood cells, albumin or sugar was found. Urine culture showed no growth. Sonogram of the pelvis was suggestive of 3.2*1.8*2.9 cm cyst in region of the labia minora with thick internal echoes, thus giving secondary infection as one of the differential diagnosis. Her previous ultrasound of the abdomen and pelvis was suggestive of differential diagnosis of clitoral cyst and bartholin cyst due to spindle shaped area in clitoral region measuring 2.1X0.8X1.0 cm with cystic interiors and mild thickening of walls with no abnormal vascularity. CECT pelvis and perineum was suggestive of mild hypertrophy of the clitoris with a hypo dense cystic structure measuring 1.7*1.1cm within the tip of the clitoris suggestive of a clitoral cyst. After preoperative workup and fitness clitoral cyst excision was done. A skin incision was taken on the right side of the cyst. (figure 2). The cyst was separated from the surrounding tissues by sharp and blunt dissection (figure 3), the cyst opened up inadvertently, and thick caseous like sebaceous material spilled out (figure 4). It was  sent for culture, cyst wall removed completely. (figure 5) and sent for histopathology. Hemostasis was achieved. Base of the cyst cavity was obliterated with continuous absorbable sutures and re-approximation of wound incision with subcuticular absorbable sutures (polyglactin 3-0) was done. (figure 6). Foley’s catheter was placed to drain the urinary bladder postoperatively for 24 hours. Histopathology report was suggestive of cyst wall lined with simple squamous epithelium containing putty keratin material; simple clitoral cyst was given as the final diagnosis. No organisms grew on culture. The perioperative period was smooth. The wound on subsequent follow ups was healed well. She had no neurological or cosmetic complaints. 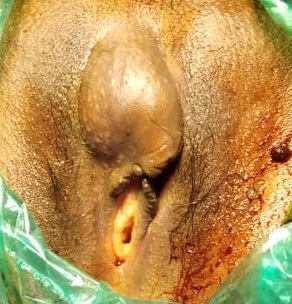 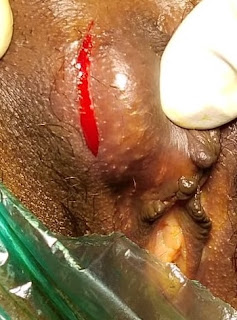 Figure 2. Skin incision taken on right side of the cyst. 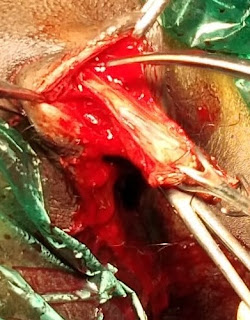 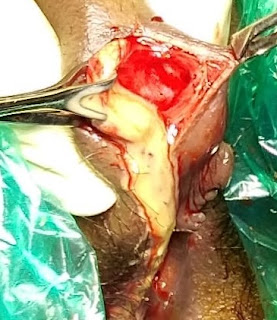 Figure 4. Caseous material coming out from the cyst. 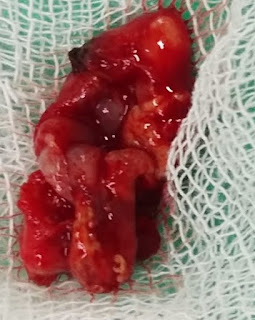 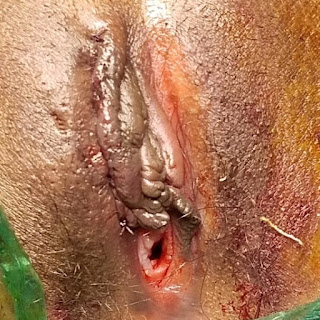 Cyst in clitoral region is a rare entity. On reviewing the literature the most common histopathology variant is found to be an epidermoid inclusion cyst. Common sites of epidermoid inclusion cyst includes face, neck, trunk.[1] Epidermoid cyst in vulvar region; clitoris as a common site is commonly associated with a history of genital mutilation/ trauma/ surgeries in the past.[2] Very rarely, cases of spontaneous clitoral cyst have been reported,[3]one such case being ours. Spontaneous clitoral cyst causing pseudoclitoromegaly can be differentiated into benign and malignant conditions based on clinical findings and radiological investigations.  Common benign conditions presenting as clitoral cyst are neurofibromas (30 cases have been reported so far) and haemangioma (6 cases have been reported).[4] Rarely  conditions like angiokeratoma, hemangiopericytoma, granular cell tumor can also present as benign clitoral cyst (1 case each reported till now).[4] Malignant conditions rarely presenting as clitoral cyst are schwannomas, rhabdomyosarcomas, lymphoma, endodermal sinus tumor (2-3 cases reported).[4] Another rarest differentials of clitoral cyst is clitoral choriostoma with only 1 case reported so far.[5] Clitoral cyst with virilization features, hormonal imbalance, and ovarian cyst suggest association of clitoral cyst with polycystic ovarian syndrome (PCOS) as seen in a study.[6] Another case reported by Healy suggested sub pubic cartilaginous cyst as a rare variant of clitoral cyst.[7] Clitoral cyst can also present in  old age due to atrophic vaginitis causing clitoral phimosis, which leads to painful periclitoral pseudo cyst.[8] Lastly a syndrome ‘penis at 12’ may mimic clitoral cyst, however urethral meatus below the clitoris and karyotyping aids in differentiating the two conditions. There is no recurrent clitoral cyst reported in literature so far.  In our case the histopathology report of recurrent cyst was also suggestive of simple cyst with squamous lining filled with keratin material, giving it an appearance of cheesy caseous material. Although the recurrence is unexplained, one cause that could be thought of is improper incision during previous surgery which was a median incision, which caused tension during wound healing creating dead space for the cystic material to collect and cyst to reoccur. In this context, the incision this time was taken on the right side of the cyst parallel to the right labia majora folds along the natural skin lines (figure 2), so that the wound heals without tension and the cyst does not reoccur. Till now on subsequent postoperative follow ups for the past 3 months, swelling has not reoccurred.