Acute uterine inversion has a rare occurrence and is a catastrophic obstetric emergency. The condition should be recognized quickly and managed appropriately by a multi-disciplinary team, in order to minimize maternal morbidity and  mortality. We report a case of acute uterine inversion with obstetric hemorrhage and shock, the etiology for inversion being mismanagement of third stage of labor in a case of adherent placenta. A diagnosis of morbid adherent placenta should be borne in mind, in cases where there is retained placenta in the third stage of labor, to avoid unforeseen complications. This report highlights the importance of this condition and provides optimal management of this potentially life threatening condition.

Acute uterine inversion is a remote complication of third stage of labor. It is said to have occured when the fundus of the uterus collapses into the endometrial cavity, thus turning the uterus inside out. It may be either a complete or incomplete variety of inversion. In complete type the uterine fundus extends beyond the external os and in incomplete type the fundus lies within the endometrial cavity. A prolapsed type is also described in which the uterine fundus lies outside the vaginal introitus. It is usually caused by improper obstetric manipulation during vaginal or cesarean delivery and in most of the cases it is a catastrophe of the third stage of labor. The clinical picture typically is that of hemorrhage and shock. Maternal mortality can be as high as 15%.[1] The incidence of uterine inversion varies according to geographical location and ranges from 1:25001 to 1:20000.[2,3] Uterine inversion is also classified according to the extent and severity of the inversion into first degree (fundus reaching up to the internal os), second degree (corpus or body of the uterus is inverted up to the internal os) and third degree (uterus along with cervix and vagina are inverted and are visible outside). Timing of the uterine inversion is also important. Based upon the timing of inversion it is classified into acute (which occurs within 24 hours of birth), subacute (occurring after 24 hours but within 4 weeks after birth) and chronic (which occurs after 4 weeks).

A 23 year old woman, Para3, Living 3, day one of full-term normal vaginal delivery was referred from a peripheral hospital to tertiary care institute in view of acute postpartum uterine inversion with severe hemorrhage and shock. Patient had a uneventful full term vaginal delivery and delivered a male child of 3.5 kg. Following delivery of the baby, the third stage of labor was prolonged for one hour and placenta was removed by on duty staff nurse by traction on the umbilical cord which had lead to placental separation with uterine inversion and postpartum haemorrhage. Manual reposition of uterine inversion was attempted in the same hospital, which filed. The details of the same were not available. The patient arrived 4 hours later to our institute. She was in agonizing pain with severe pallor, with pulse rate of 155 bpm and blood pressure of 70/50 mm Hg. Per abdomen examination showed cupping at the fundus with uterine size of 12 week. Speculum examination revealed a fleshy mass (inverted uterus) upto the cervical os with fresh bleeding. Antishock measures were taken and antibiotic therapy was instituted. A Foley’s catheter was passed into the bladder. Her hemoglobin was 4.4 g%. Her coagulation profile were normal. Blood transfusion was started. During examination under general anesthesia a small defect was felt at the uterine fundus more on the left side and hence a diagnosis of uterine rupture with inversion was made. An exploratory laparotomy was performed. Operative findings revealed uterus inverted in the fundal region with bilateral fallopian tubes, ovaries and round ligaments dragged upto the uterovesical fold of peritoneum, and 200 ml of hemoperitoneum. Huntington procedure was performed for correction of uterine inversion in which Allis’ forceps were placed in the cup of the inversion and gentle upward traction was applied.[4] In view of tight constriction ring, simultaneously vaginal assistance was also obtained by pushing up the fundus with the palm of the hand and fingers in the direction of long axis of cervix. Repeated clamping and traction was continued until the inversion was corrected. After correction of uterine inversion a complete uterine rupture of 5 cm was noted at the uterine fundus. Uterus was pale and flabby and bleeding was present from the rupture site. Hence an obstetric hysterectomy was performed. Approximate blood loss was 1.5 liters and duration of surgery was 2 hours. Intraoperatively and postoperatively 6 units of blood, 4 units of fresh frozen plasma and 2 units of cryoprecipitate were given. Postoperative course was uneventful and patient was discharged on day 7 of surgery. Histopathology of the hysterectomised uterine specimen showed villi penetrating the myometrium suggesting of placenta accreta with rupture uterus. 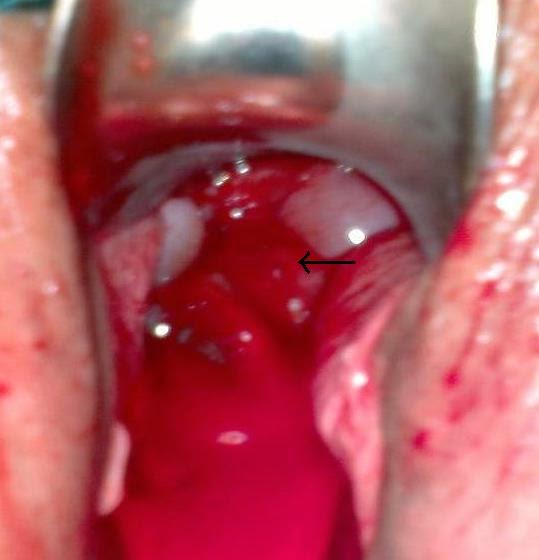 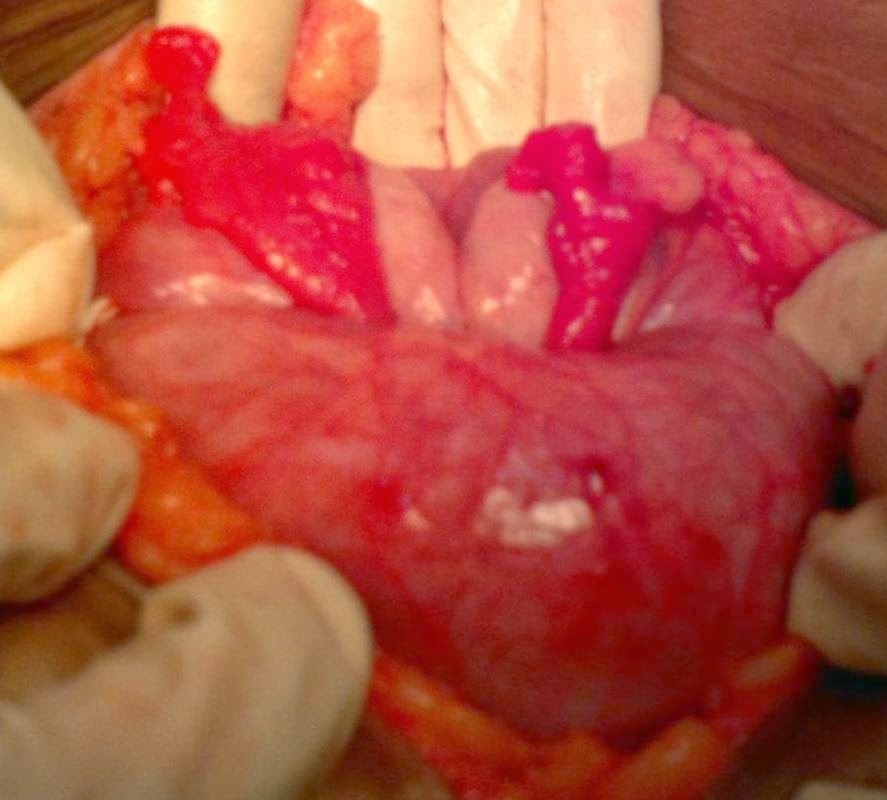 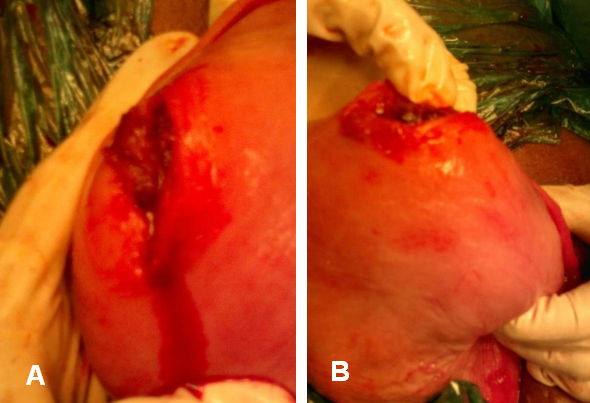 Figure 3. Complete uterine rupture of 5 cm noted in the fundal region with active bleeding present from the rupture site and atonic uterus. A. Side view; B. Front view.

Puerperal uterine inversion is due to displacement of the fundus of the uterus, usually occurring during the third stage of labour. It is classified as complete if the fundus passes through the cervix, or incomplete if it remains above this level. The most common cause is mismanagement of third stage of labor in which premature traction is applied on the umbilical cord before placental separation. Spontaneous  inversion  is thought to occur due to localized atony on the placental side of the uterine fundus, and an increase in the intraabdominal pressure during bearing down, coughing or sneezing. The various predisposing factors includes morbidly adherent placenta, short umbilical cord, fundal pressure, implantation of the placenta at the uterine fundus, rapid or long labors, injudicious use of oxytocics, previous history of uterine inversion, congenital weakness of the uterine musculature as in collagen tissue disorders like Ehler Danlos syndrome and certain tocolytic drugs like magnesium sulphate. The diagnosis of acute postpartum uterine inversion is mainly clinical, based on three elements - hemorrhage, shock and a strong pelvic pain. The initial type of shock is usually neurogenic type due to vagal stimulation associated to nervous tissue contained in the uterine ligaments leading to bradycardia and hypotension; but it is always better to be prepared for hemorrhagic and hypovolemic type of shock that will follow in many cases. The amount of hemorrhage is directly proportional to the duration of uterine inversion. In our case, shock was not only due to  uterine inversion but  could also have been  due to the uterine rupture which might have occurred due to excessive force applied for correcting uterine inversion before patient was shifted to our institute.

The initial gold standard treatment of uterine inversion is maternal resuscitation along with manual uterine reposition, as delay can make reposition difficult due to formation of constriction ring and edema and it also increases the ongoing hemorrhage. Manual reposition of the uterus is usually aided by pharmacologic agents, anesthetic or tocolytic drugs which causes uterine relaxation. Agents causing uterine contraction are given after correction of the inversion to prevent reinversion and also to decrease the blood loss. The ’s technique consists of exploratory laparotomy and correction of uterine inversion by  applying progressive traction at the crater of the inversion.[4] Retained placenta in third stage of labour should always give a suspicion of conditions like adherent placenta. Maneuvers like manual removal of placenta should always be contemplated in operation theatre with a multidisciplinary team involving anaesthetist and obstetrician. Women should also be counseled that uterine inversion can recur in subsequent pregnancy and therefore there is a need for hospital delivery in the future. Uterine inversion can be prevented by meticulous training of traditional birth attendants and health care providers in the management of third stage of labor as mismanagement of this stage is the pivot for the development of uterine inversion and its related complications.