An atypical case of scar endometriosis with cervical agenesis in a 17 year old girl who presented with complaints of primary amenorrhea, cyclical abdominal pain and cyclical bloody discharge at the previous scar site of exploratory laparotomy is presented here. In view of these complaints a definitive surgery in the form of hysterectomy for a functional non communicating horn was performed.

Mullerian duct anomalies occur in 0.1-3.5 % of all women.[1] Congenital absence of the cervix occurs in 80,000 to 100,000 births.[2]   Cervical agenesis is a relatively uncommon complex mullerian malformation which results in disordered vertical fusion of mullerian ducts. It usually presents with a normal functional uterus, endometrium and tubes. External genitalia are apparently normal. Presence of functional endometrium  with outflow tract obstruction (cervical agenesis) and patent fallopian tube is found to be associated with endometriosis in 77% of cases.[3] The ASRM classification of mullerian anomalies (American Fertility Society (AFS), 1988) Class  Ia includes cases with vaginal agensis combined with functional uterus and endometrium: the uterus may be normal or present with fusion or resorption defects and the cervix may be present, absent or hypoplastic. Cases with cervical agensis are included in class Ib.[4] According to the AFS classification of uterovaginal anomalies cervical agensis is categorised into Class IIb which includes disorders of vertical fusion of mullerian ducts. Partial or complete cervical atresia has been described in the presence or absence of vaginal atresia.

A 17 year old unmarried woman presented with complaints of bloody discharge from previous exploratory laparotomy site incision along with cyclical abdominal pain for last 2.5 years, and primary amenorrhea. She had undergone an exploratory laparotomy with right ovarian cystectomy followed by creation of neovagina 3 years ago at a peripheral hospital for primary amenorrhoea with right tuboovarian mass. No intraoperative details were available but histopathology report of ovarian cyst was suggestive of endometrioma. The patient did not have menstrual cycles even after surgery. Her abdominal pain was relieved for 6 months after which it had recurred. There was no history of any other medical or surgical illness in the past. On examination her vital parameters were stable and systemic examination revealed no abnormality. Her secondary sexual characters were well developed. Her external genitals were normal. Her  abdomen was soft. There was a Pfannensteil scar with induration of 2 cm at the right end of scar site. A firm mass of 12 weeks’ size was felt arising from the pelvis deviated to the right side. It was fixed at the scar site. Vaginal examination revealed a blind vaginal pouch 2 cm deep. On per rectal examination the uterus was 12 weeks in size, deviated to right side and was firmly adherent to the right side of the scar. Ultrasonography (USG) of the pelvis showed left ovarian simple cyst 3.5 cms × 1 .5 cms and hemorrhagic cyst of 3.9 × 2.7 cms and uterus was measuring 10×4.8×6 cm with  fluid in the endometrial cavity with endometrial thickness of 1.8 cm. Sinogram was tried but could not be performed. Magnetic resonance imaging of pelvis and abdomen showed a bulky uterus adherent to the scar site with cervical aplasia and endometrial cavity containing chronically retained blood products; a hemorrhagic cyst measuring 3.5×3 cm and a simple cyst in the left ovary. Both kidneys were normal. On admission the patient had acute pain in the abdomen which was followed by appearance of blood filled vesicles on the right side of the scar with induration, which burst to discharge bloody fluid over 3 to 4 days. A diagnosis of cervical and vaginal agenesis, hematometra and utero-abdominal fistula was made. The patient and her parents were counseled about the advantages and disadvantages of reconstructive surgery and definitive surgery in the form of hysterectomy and they opted for definitive surgery. A laparotomy was performed. There were dense adhesions between right side of the anterior abdominal wall layers which were separated by blunt and sharp dissection. The rectus sheath had a small opening in right corner through which chocolate brown material was seen coming out which could have been due to presence of a sinus tract between the uterus and rectus sheath or scar endometriosis. The uterus was 12 weeks in size, deviated to right side and stuck to the rectus muscle and sheath by dense adhesions. There were omental adhesions with the uterus which were divided. There was a right sided tuboovarian mass of 4×5 cm which was adherent densely to overlying anterior abdominal wall and the uterus. This was accidentally ruptured during separation of adhesions and clear fluid was seen coming through it. Left fallopian tube and ovary were normal and cervix was absent. In view of these findings a hysterectomy with right sided salpingoophorectomy was performed. The patient made an uneventful recovery and was discharged on day 7. Histopathology report of hysterectomised specimen was suggestive of disordered proliferation with fibrosis and occasional endometrial glands with evidence of right sided corpus luteum cyst. Histopathlogy of the excised scar tissue in rectus sheath showed endometriosis. The patient had no complaints of pain in the scar and pelvis at regular follow up examinations in the outpatient department.

Figure 1. T2 iso- hyper intense lesion seen with absent fat planes with the uterus just anterior to it on the right side and infiltrating the rectus sheath (orange arrow) and subcutaneous fat which on post contrast show homogenous enhancement of the lesion. 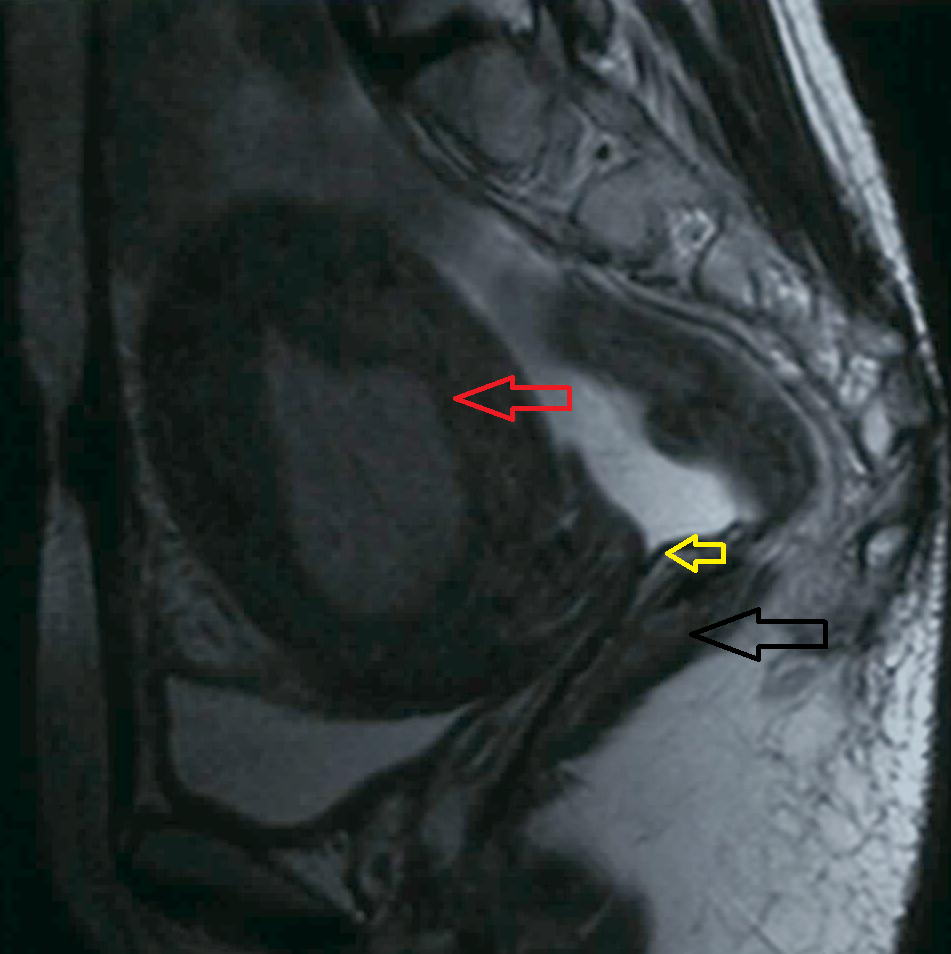 Figure 3. Appearance of bluish vesicle (black arrow) on the right side of the scar followed by bursting of the vesicle and discharge of bloody fluid suggestive of scar endometriosis. 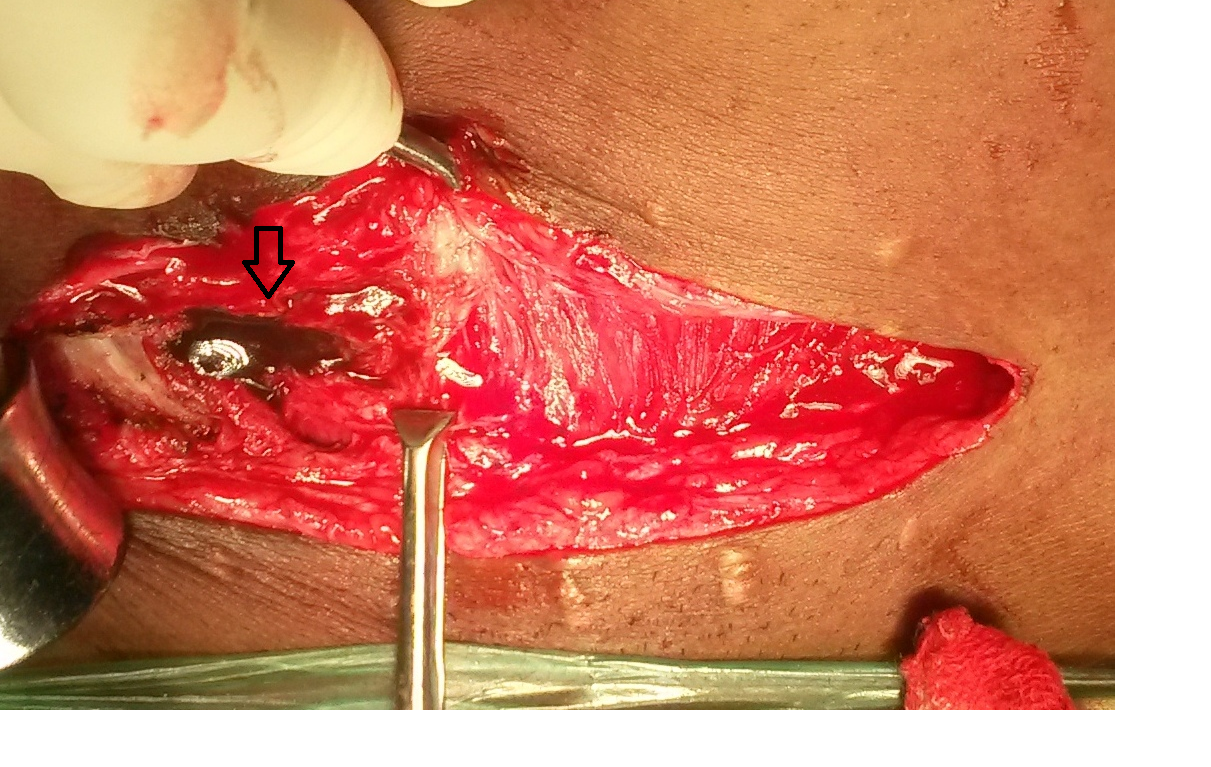 Figure 4. Chocolate coloured material (black arrow) coming from the right side of the rectus sheath. 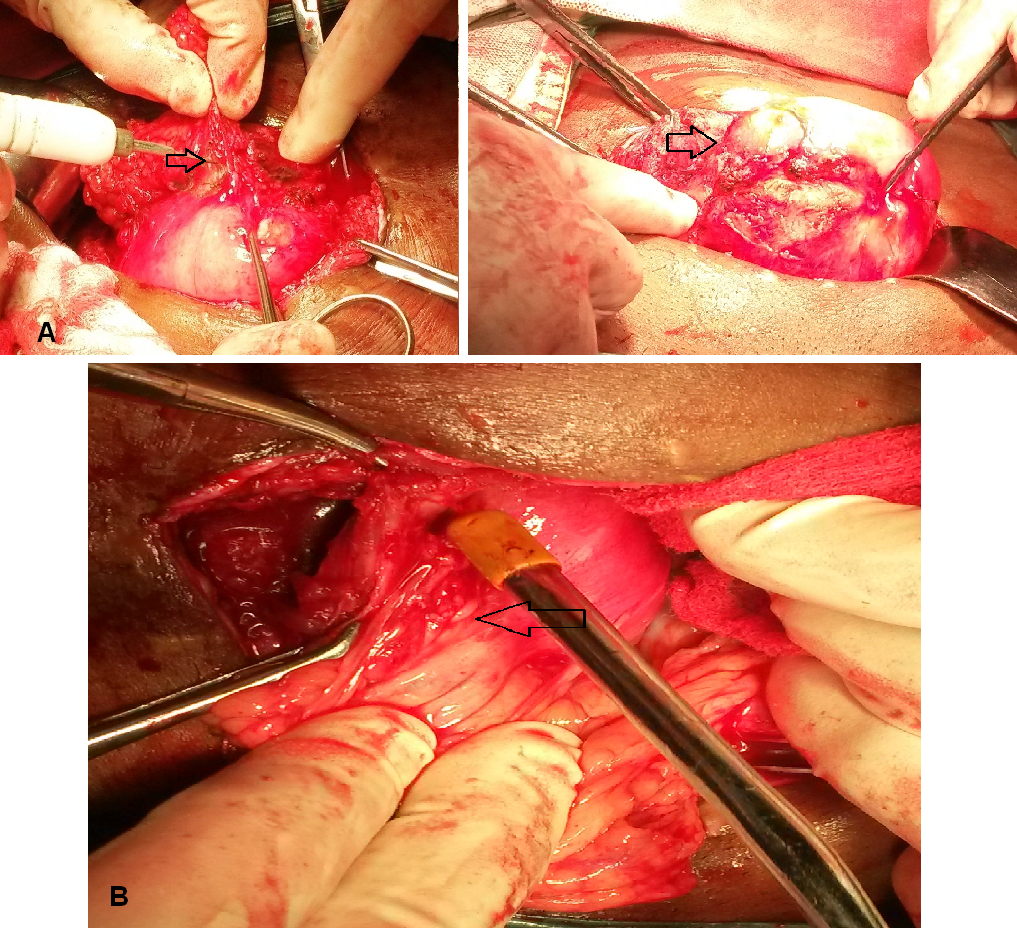 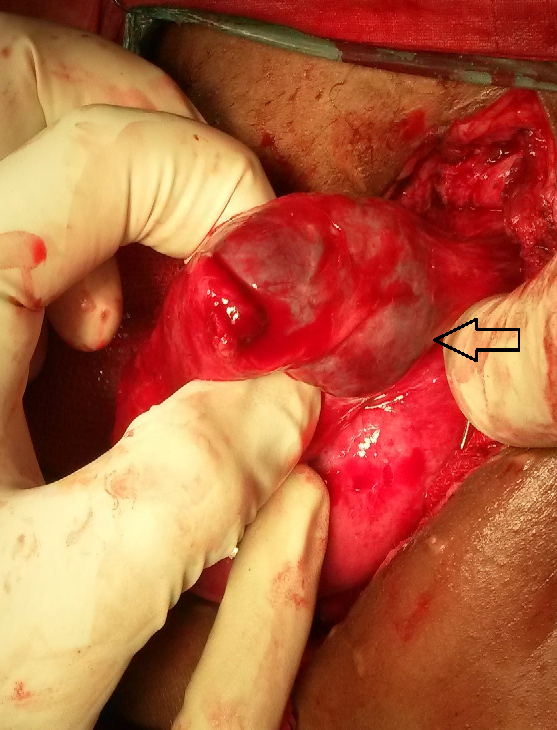 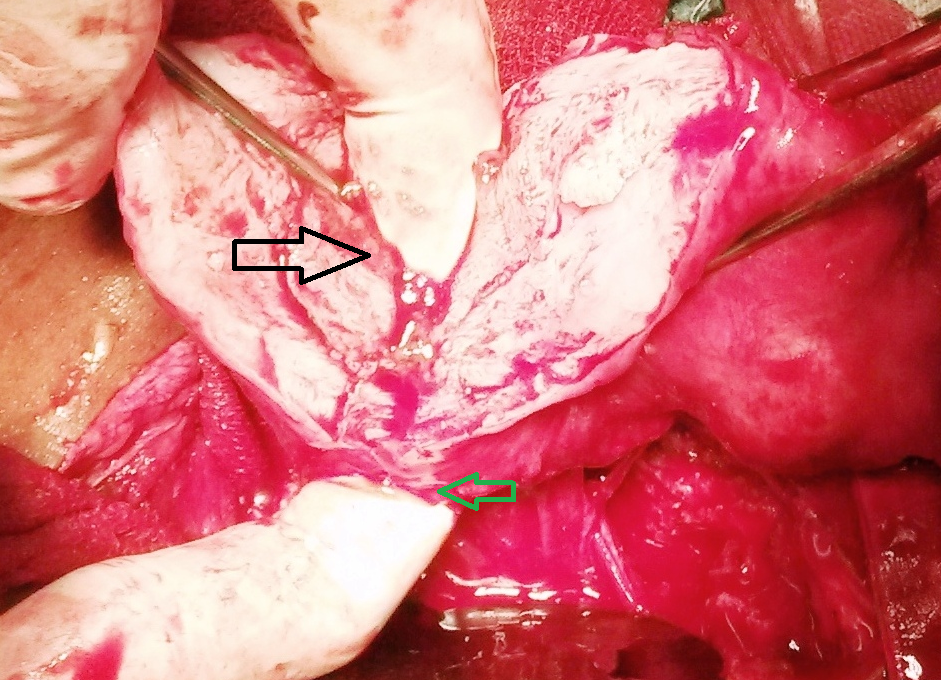 Mullerian ducts form fallopian tubes, uterus and cervix and upper two thirds of vagina. Anomalies in any of the three phases of organogenesis, fusion or septal resorption results in a mullerian duct anomaly. The cervix is formed at 20 weeks by condensation of stromal cell at a particular site around the fused mullerian duct. Its differentiation involves both mesodermal and endodermal tissue. Cervical agensis occurs due to a defect in elongation of mullerian duct. Cervical agensis often occurs in association with absence of a portion or all of the vagina.[5] A patient with cervical agensis with functioning endometrium typically presents with primary amenorrhoea and cyclical abdominal pain as in our case. Endometriosis is often associated with outflow obstruction and functional endometrium leading to hematometra as in our case. Scar endometriosis as seen in our patient is attributed to implantation during previous gynaecological surgery. USG is helpful in suspected case of mullerian agensis and is a preliminary investigation of choice. Confirmation of the diagnosis with magnetic resonance imaging is mandatory. Various reconstructive surgeries like uterovaginal anastomosis, cervical cannulation, and cervical stent placement have been reported in literature for cervical agensis; but the patient should be counseled about the complications such as endometriosis , pelvic inflammatory disease, endometritis, persistent pelvic pain, restenosis, pelvic infections, need of repeated surgeries, bladder and bowel injuries due to adhesions in subsequent surgeries associated with reconstructive surgeries and death due to reconstructive surgeries.[6] The newly created cervix lacks cervical mucus glands necessary for sperm transport. Hysterectomy is a definitive surgery and is recommended as the procedure of choice in patients such as ours. It reduces the complications such as cryptomenorrhoea, infections, endometriosis and need for multiple surgeries. Reconstructive surgeries should be considered in selected patients after a thorough discussion with the patient and her family after explaining the risk and morbidity associated with reconstructive surgeries, and hysterectomy should always be offered as a definitive treatment modality.