We report a case of pregnancy with silent rupture at 32 weeks of gestation in a left horn of bicornuate uterus which continued till 35 weeks, followed by delivery of a live fetus.  The diagnosis of bicornuate uterus was missed in early weeks of gestation on ultrasonography (USG) and later was misdiagnosed as abdominal pregnancy. Preoperative diagnosis with USG and magnetic resonance imaging (MRI at our institute confirmed the diagnosis of pregnancy in the left horn of uterus. A live fetus was delivered by cesarean section followed by excision of the left uterine horn.

Congenital malformation of uterus is due to abnormal fusion of mullerian ducts or failure of absorption of the septum. Mullerian duct anomalies are estimated to occur in 0.4%.[1] They can be diagnosed at different stages of life. Abortion, preterm delivery, malpresentation, fetal growth restriction are more commonly seen in women who have bicornuate uterus. Non invasive imaging modalities like USG and MRI helps in diagnosis of bicornuate uterus in early weeks of gestation.

A 30 year old woman, married for 15 years, gravida 2 para 1 with 33 weeks of pregnancy was referred from a private hospital in view of USG suggestive of an abdominal pregnancy with hemoperitoneum. She had full term normal delivery 9 years ago. Her early USG at 17 weeks and 32 weeks showed normal intrauterine pregnancy. At 32 weeks of gestation she was admitted in a private hospital in view threatened preterm labor. USG done at that time showed an extrauterine abdominal pregnancy with hemoperitoneum for which she was referred to our tertiary care center. On examination, her general condition was fair, vital parameters were normal. Abdominal examination revealed pregnancy of 32 weeks in breech presentation, normal fetal heart sounds and relaxed uterus. USG at our center showed a bicornuate uterus with pregnancy in the left uterine horn with no hemoperitoneum. MRI also showed an intrauterine pregnancy in the left horn. She was hospitalized. An elective lower segment casarean section at term was planned for her in view of breech presentation with bicornuate uterus. But she went into spontaneous labor three weeks later and an emergency lower segment cesarean section was performed. Intraoperatively there was around 50 ml of hemoperitoneum (altered brown colored) with clots in the pouch of . Pregnancy was seen in the left horn of uterus. Right horn of uterus, right fallopian tube and ovary were normal. A curvilinear incision was made on the lower part of the left uterine horn and a fetus weihing 2.3 kg in breech presentation was delivered. The uterine wall of left horn was extremely thin (2- 3 mm). There was a rent of around 1 cm noted 8 cm from the upper margin of the left uterine horn near the left ovary. It was sealed by blood clots and omentum suggestive of an old rupture, which had probably occurred at 32 weeks when she was admitted with threatened preterm labor. There were dense adhesions seen between the posterior surface of left uterine horn, left ovary and omentum. Placenta was morbidly adherent and was removed piecemeal. Left uterine horn was atonic and hence adhesiolysis followed by excision of left uterine horn with left salpingoophorectomy was done. She was transfused with 1 unit of whole blood. Postoperative course was uneventful. 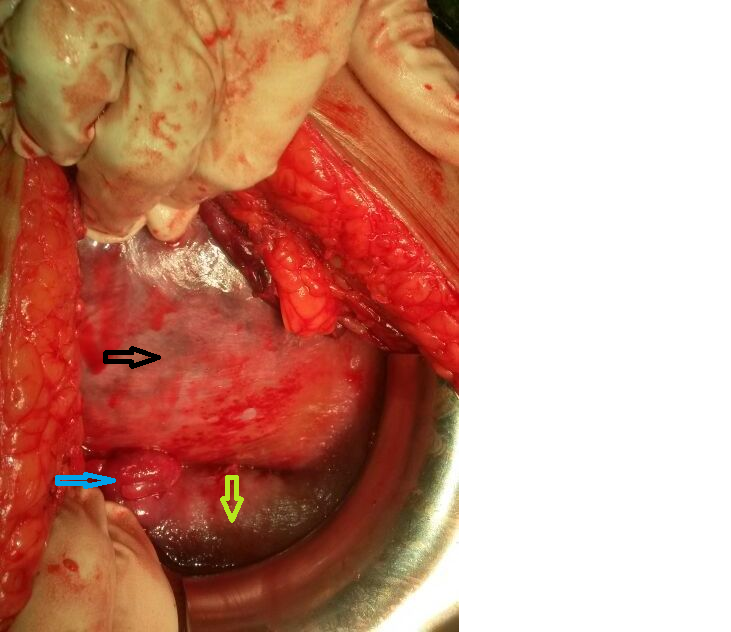 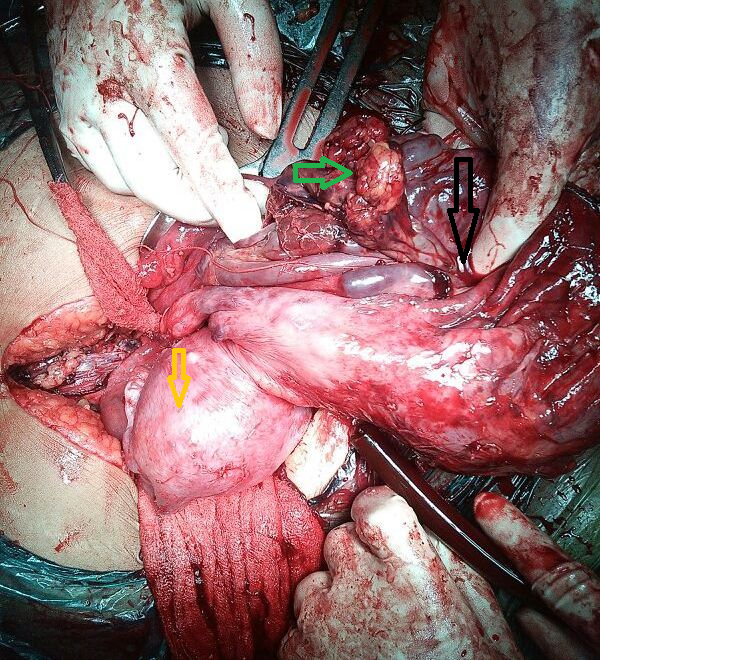 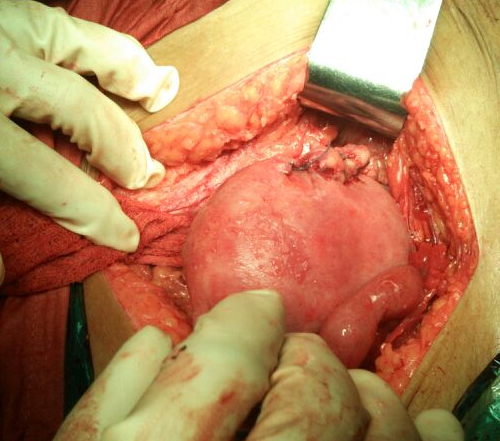 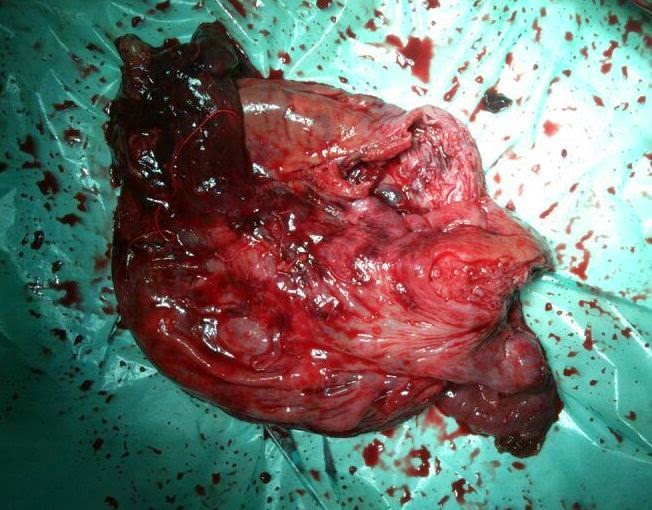 Uterus during embryogenesis is formed by fusion of two mullerian ducts. Failure of fusion of the two mullerian ducts results in separate uterine horns (bicornuate uterus). Bicornuate uetrus can be bicornis bicollis or uterus bicornis unicollis. The two uterine horns in uterus bicornis unicollis may be equal but rudimentary, or equal and well developed, or one horn may be less developed than the other. Bicornuate uterus accounts for 25% of all müllerian anomalies. Bicornuate uterus is type four according to the American Fertility Society classification of müllerian anomalies. In majority, bicornuate uterus is undiagnosed. In others, it may be accidentally diagnosed during investigation of infertility or repeated abortion or during dilatation and curettage or cesarean section. Abortion, preterm delivery, malpresentations, IUGR are more commonly seen in women who have bicornuate uterus. There is increased incidence of cesarean delivery (82% as reported by Heinonen).[2] Diagnosis of uterine anomalies on two dimensional USG is difficult.[3] Three dimensional USG is an excellent method to evaluate these malformations.[4] MRI delineates duct anomalies and their extent and its accuracy reported is 100%.[5,6] Rupture in such cases is due to inability of malformed uterus to expand.[7] There is also increased risk of postpartum hemorrhage in cases with uterine anomalies as seen in our case, which required excision of the horn.[8]