A 60 year old female, postmenopausal since 10 years, presented to the outpatient department with complaints of an episode of vaginal bleeding for 10-12 days and soakage of 3-4 pads per day. General and systemic examination were normal. No signs and symptoms of virilization were seen. On per speculum examination the cervix was hypertrophied. On vaginal examination, the uterus was anteverted, 6-8 weeks in size, and there was a right forniceal solid mass 3-4 cm in size adherent to the posterior uterine wall. Ultrasonography of abdomen showed a right bulky ovary with bilateral heterogenous echotexture with minimal free fluid. Endometrial thickness was 10 mm. Computerized tomography scan showed a well defined solid cystic mass lesion of 6 cm in size arising from the right ovary. Tumor marker levels (LDH, AFP, CA 125, CEA and Beta HCG) were normal and peritoneal fluid cytology was negative for malignancy. A total abdominal hysterectomy with bilateral salpingoophorctomy was performed and the specimen was sent for histopathological examination.

We received a specimen of total abdominal hysterectomy with bilateral salpingoopherectomy. The uterus measured 5x3x2 cm with cervix keratinized. On sectioning the uterus, the endometrium was 0.2 cm thick and myometrium 2 cm thick. A right ovarian solid cystic mass with a bosselated surface measuring 6x5x4cm was seen. The capsule was intact. The cut surface showed a predominantly solid bright yellow neoplasm with few cystic areas with greenish mucoid material and areas of hemorrhages were also seen. The left ovary was 2.5x2x1 cm and the cut surface was solid and yellow in color. 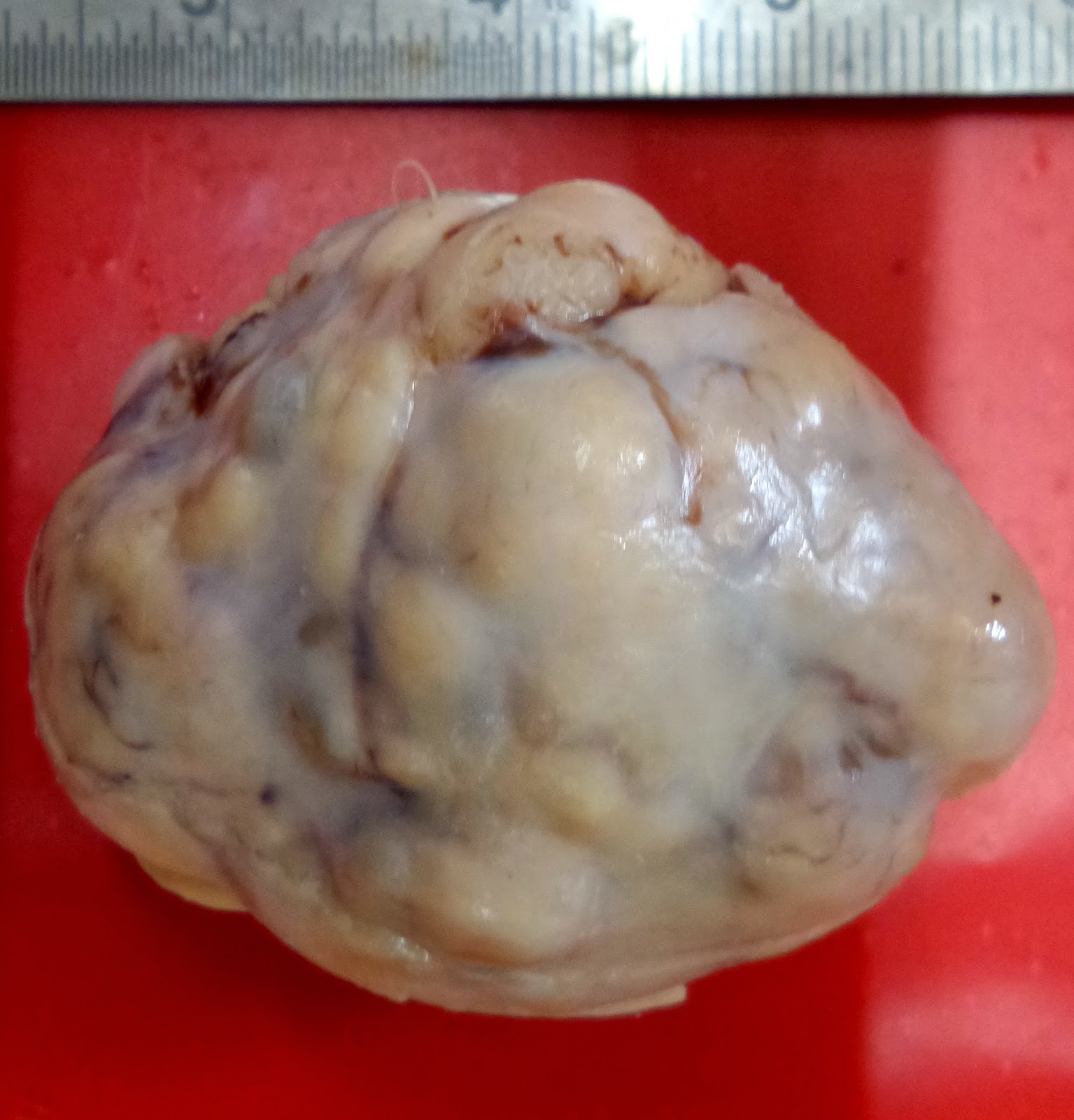 Figure 1. Right ovarian tumor with a bosselated external surface and a yellow appearance. 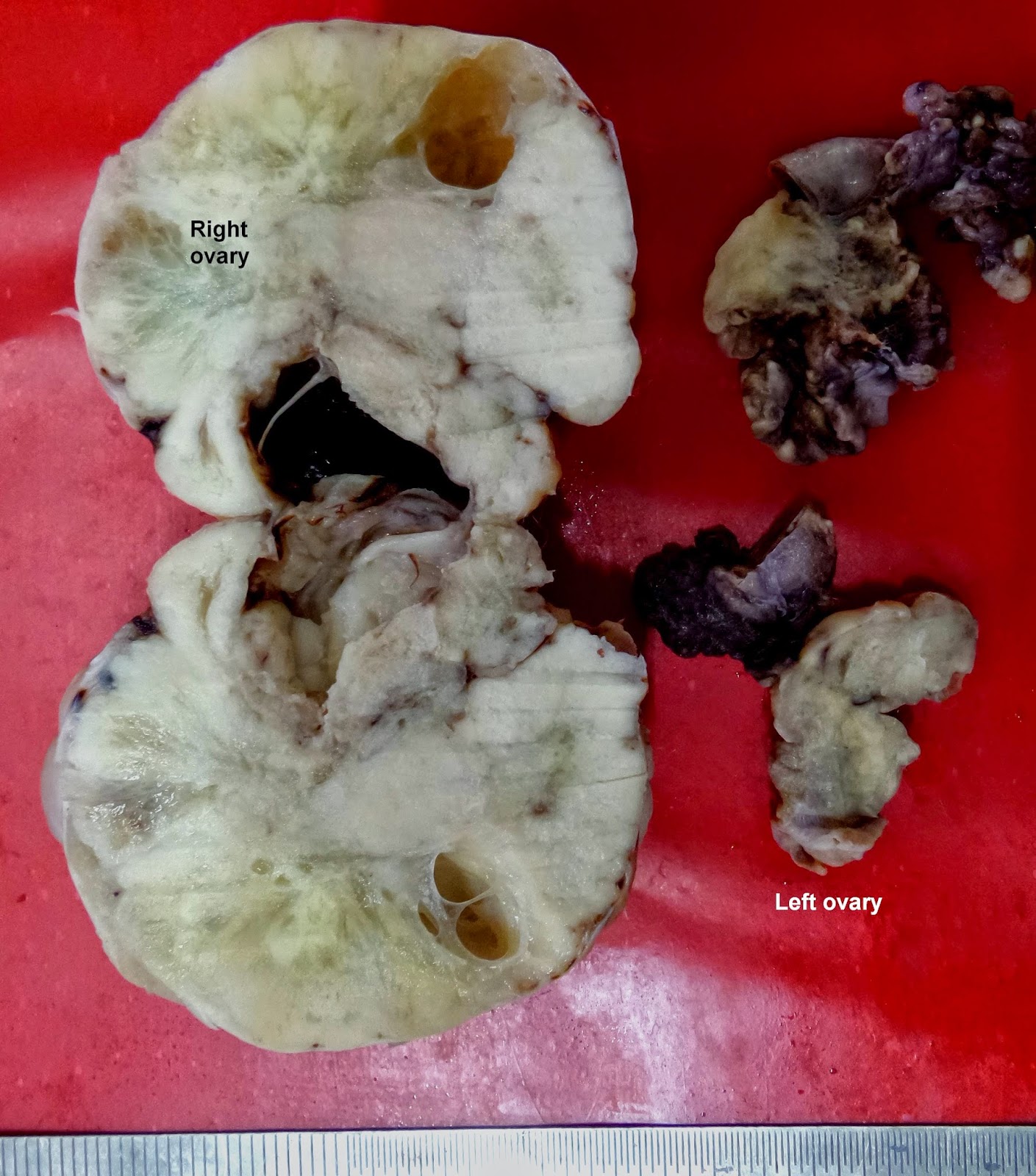 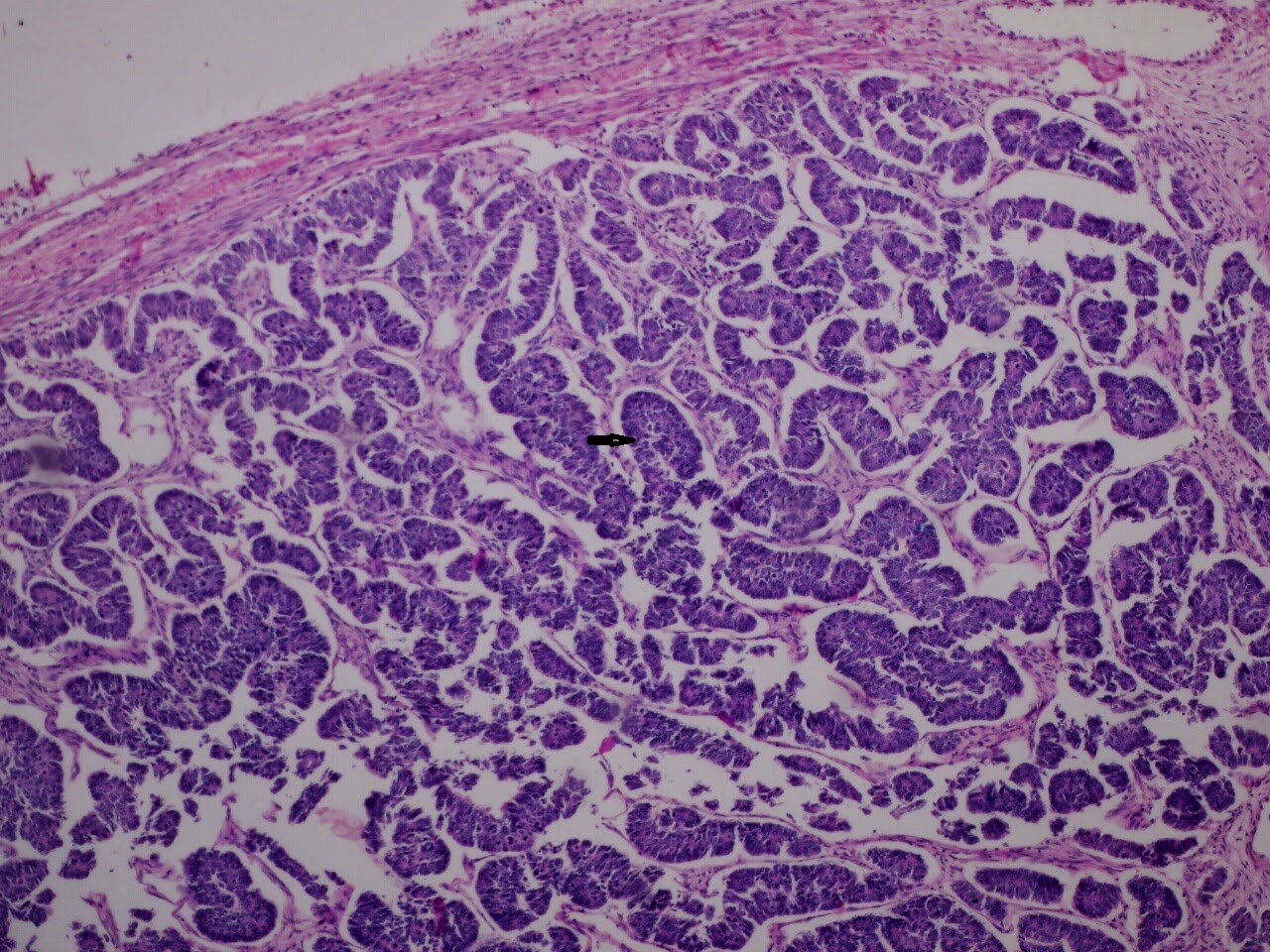 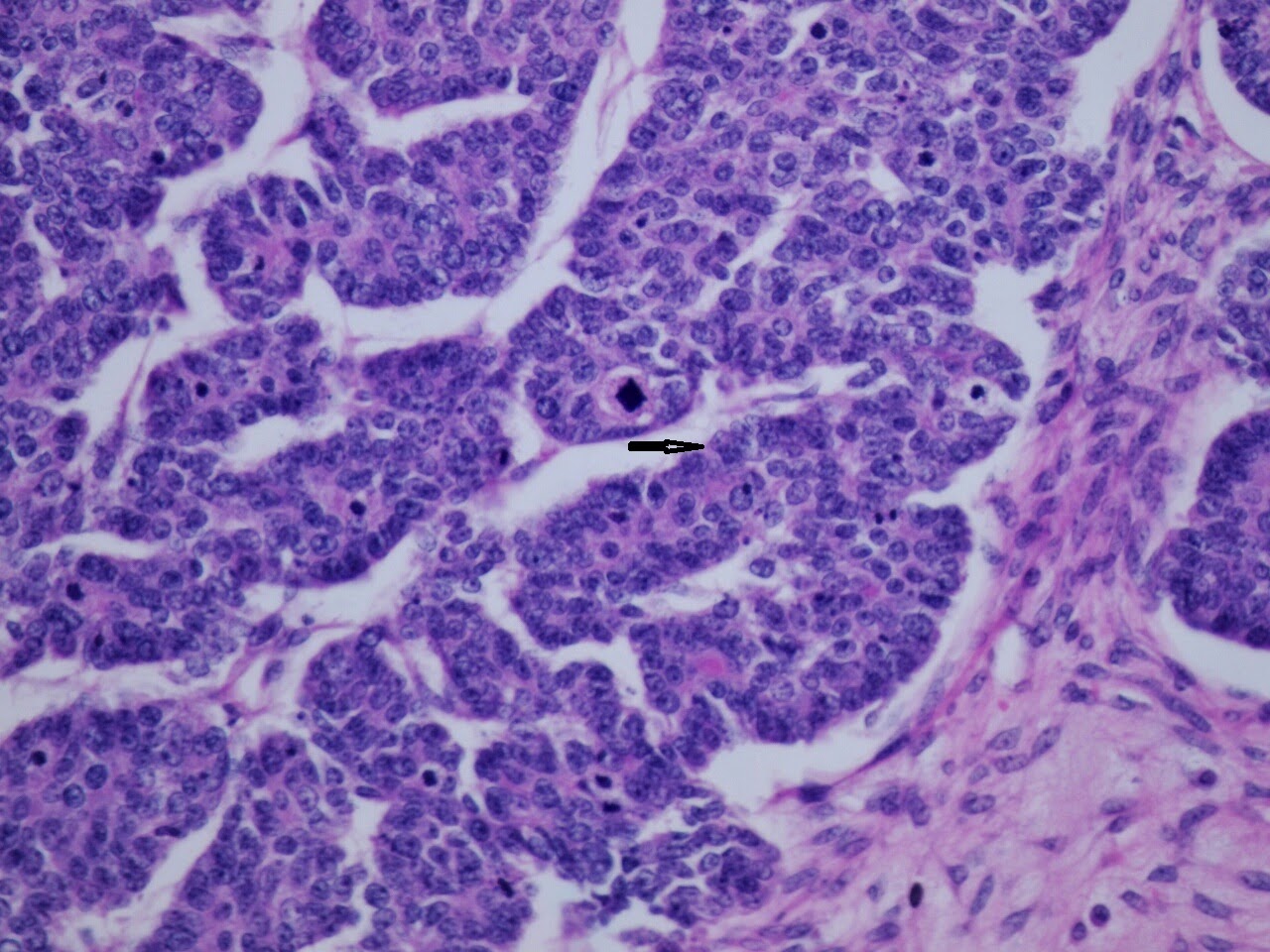 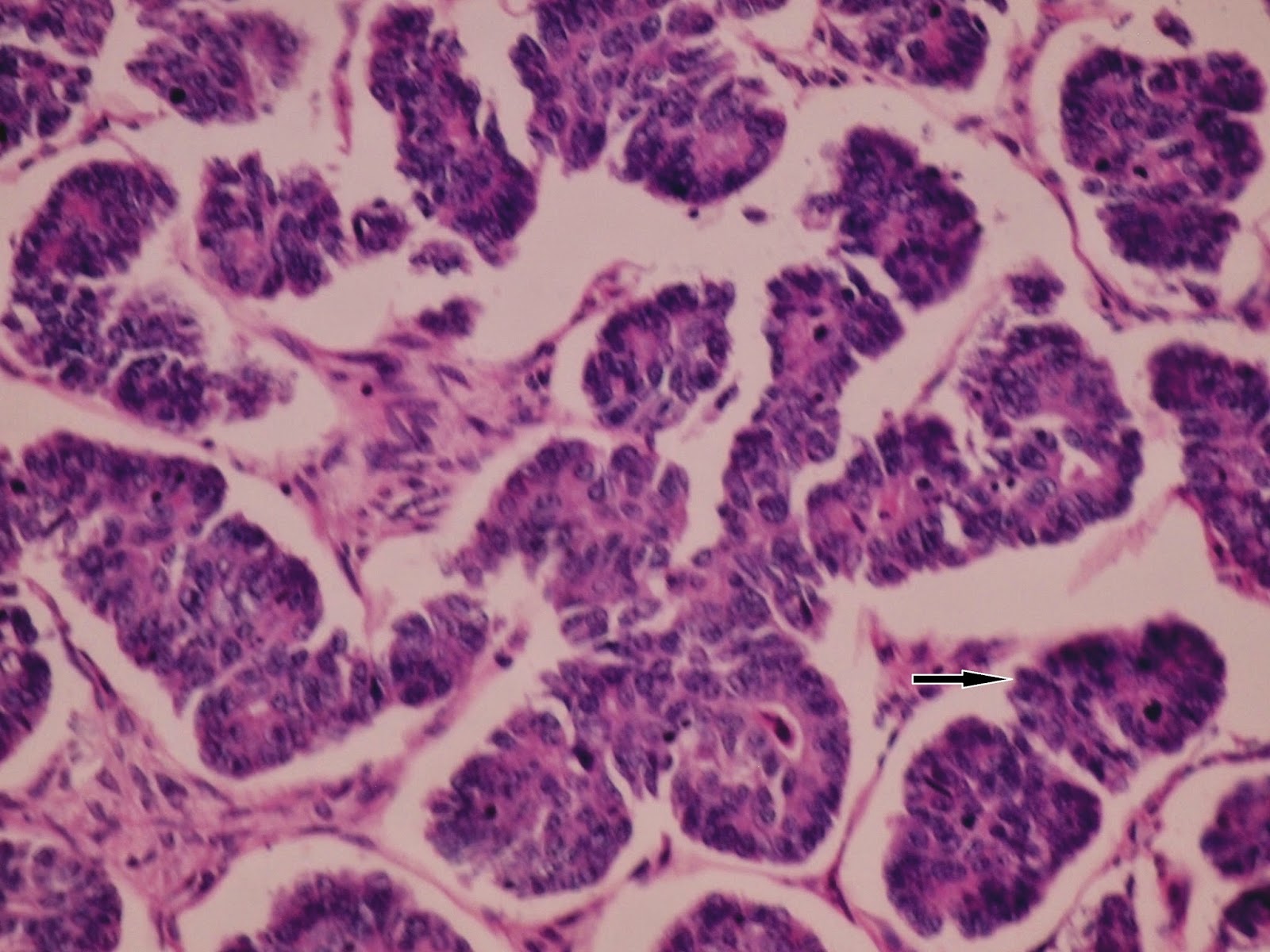 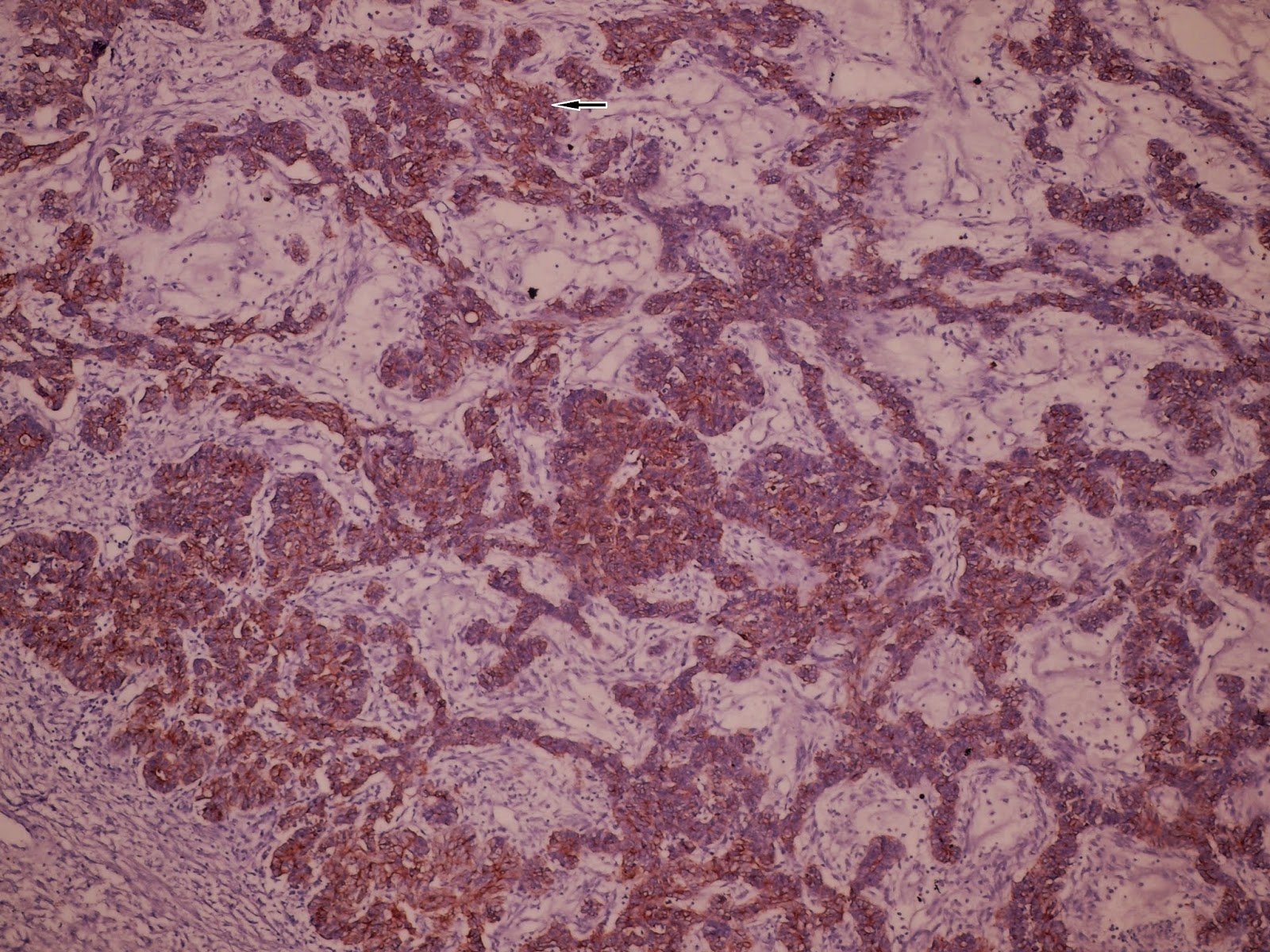 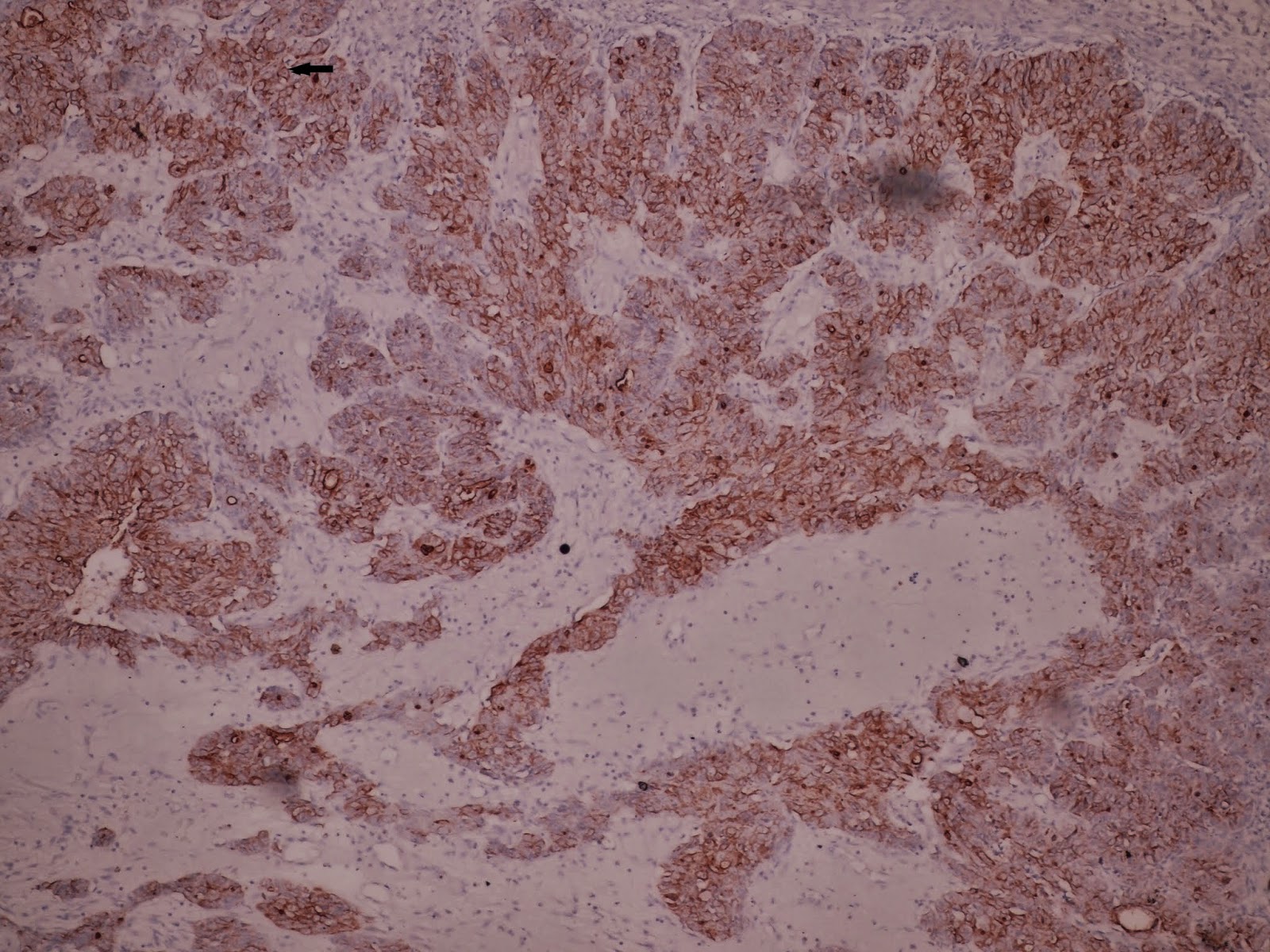 Both the ovaries showed similar histomorphological features of a malignant neoplasm composed of tubules, anastomosing trabeculae, cords, nests of malignant cells resembling Sertoli cells set in a fibrous stroma. Individual cells of these cords and tubules showed vesicular nuclei, prominent nucleoli and mild to moderate cytoplasm. Areas of conventional endometrioid carcinoma and squamous morules were also seen focally. The capsule of the tumor was intact.The uterus showed chronic cervicitis with nabothian cysts and squamous metaplasia and the endometrium showed cystic atrophy. Immunohistochemistry done, was positive for cytokeratin and negative for calretinin. Inhibin was not available. Hence the diagnosis of Sertoliform endometrioid carcinoma was confirmed.

SEC were first described by Young et al.[1] SEC are uncommon variants of endometrioid adenocarcinoma which bear histologic resemblance to Sertoli and Sertoli Leydig cell tumor. These are generally seen in postmenopausal patients, in the 60-70 year age group and the patients may have endocrine manifestations. 10% of cases show bilaterality.[1] 50%  of SLT show endocrine manifestations and patients with SEC can present with virilizing signs leading to erroneous diagnosis.[2] SEC needs to be differentiated from SLT since SLT are usually benign. SEC are seen in perimenopausal and postmenopausal patients while SLT are seen in younger patients with an average age group of 25 years. Histological features that differentiates SEC from SLT are presence of areas of conventional endometrioid adenocarcinoma and presence of mucin at the apical borders of the tumor cells.[3] SLT stains negative for mucin while SEC stains for mucin. Epithelium of SEC are pseudostratified while that of SLT are single layered. Other histological features that favor SEC would be squamoid areas, cilia, presence of endometriosis and a coexistant adenocarcinoma of endometrium.[4] We need to differentiate this variant from conventional endometrioid carcinoma because this variant has better prognosis. Other differential diagnosis for tumors resembling SEC and SLT include tubular Krukenberg tumor and mucinous adenocarcinoma, which can be differentiated on histology and special stains.
Immunohistochemistry is useful when the histology is ambiguous or it may be used for confirmation of the histological diagnosis. SEC stains for cytokeratin while SLT stains for inhibin and calretinin.[5] Our case was strongly positive for cytokeratin and negative for calretinin. Overall, Sertoliform endometrioid carcinoma are considered low grade malignancies with good prognosis if restricted to the ovary.

We acknowledge Dr. Pradeep Vaideeswar for his contribution in the diagnosis of this case.