Adenomyosis is characterized by uterine enlargement due to ectopic rests of endometrium located deep within the myometrium. It usually presents with pelvic pain, dysmenorrhea and menorrhagia. We present a case of adenomyosis presenting with menorrhagia where the uterine size was equal to a 16 weeks size on abdominal and pelvic examination. Cases have previously reported uterine sizes up to 12 weeks.

Adenomyosis is a benign condition which usually affects women in their forties and fifties. The incidence of the adenomyosis ranges from 20%-60% depending on histologic criteria and the degree of sectioning.[1]  According to one study nearly 90% cases are seen in parous women.[2] It is a clinical diagnosis which can be confirmed by histopathology report. It can have a significant impact on the lives of those affected with the disorder due to complications ranging from pelvic pain to menorrhagia to potential adverse fertility consequence.

A 40 year old patient G4P3L2A1 came in the outpatient clinic in January 2013 with a complaint of heavy vaginal bleeding since 2 monthly cycles. Detailed history was taken and general examination was done. On abdominal examination the uterus was not palpable. On speculum examination cervix and vagina were healthy and bleeding was present. On vaginal examination uterus was 8 to 10 weeks in size, anteverted and fornices were free. The patient was advised to undergo a hysterectomy. But she was not willing for surgical management. Her hemogram and other investigations like serum TSH, liver and renal function tests, coagulation profile, and prolactin were within normal limits. Her PAP smear was inflammatory and endometrial aspirate showed no malignant cells. Ultrasonography of the pelvis showed endometrial hyperplasia (endometrial thickness 13 mm) but uterus was normal in size (dimensions of the uterus were not mentioned). In view of abnormal uterine bleeding and a normal endometrial cytology and patient not willing for surgical management, she was started on oral ormeloxifene 30 mg biweekly for 3 months and then once a week for the next 3 months. However, as her symptoms were not relieved an emergency therapeutic dilation and curettage (D&C) was done in April 2013.  At that time the uterus measured 12x8x7 cm on ultrasonography (USG) and uterocervical length measured with the uterine sound during D&C was 10 cm. Patient was continued on ormeloxifene  as her histopathology report showed proliferative changes in the endometrium with no hyperplasia or atypia. She responded to the 6 month course of this medication. She presented again with similar complaints in November 2013 and a second course was started in November 2013 since patient had responded to ormeloxifene and she was still not willing for a surgical management by hysterectomy. She followed up irregularly but continued her drug till May 2014. She then had 3 months of amenorrhea. Patient had another episode of menorrhagia in November 14 in which she bled continuously for one month. It failed to respond to parenteral tranexamic acid. On abdominal examination uterus was now 14-16 weeks in size. On speculum examination the cervix and vagina were healthy. On vaginal examination the uterus was 16 weeks in size, anteverted and fundus was broad. Ultrasound (USG) of the pelvis showed an enlarged uterus (18.8 x 6.2 x 8.6 cms) with thickened endometrium (15.4 mm). A D&C was done in view of the above USG findings. UCL was 15 cm and histopathology report was suggestive of bleeding endometrium. No atypia or hyperplasia was detected. As the medical therapy had failed and the uterine size had increased from 8 to 10 weeks to 16 weeks (dimensions of 8.6x5.9x4.9 cm to 18.8x6.2x8.6 cm) in 21 months while taking two 6 month courses of ormeloxifene, a total abdominal hysterectomy was performed on 4th December 2014.  In intraoperative findings uterus was 16 weeks in size. On gross examination of the uterus, it was 14 x 6 x 4 cm in size as shown in Figure 1. 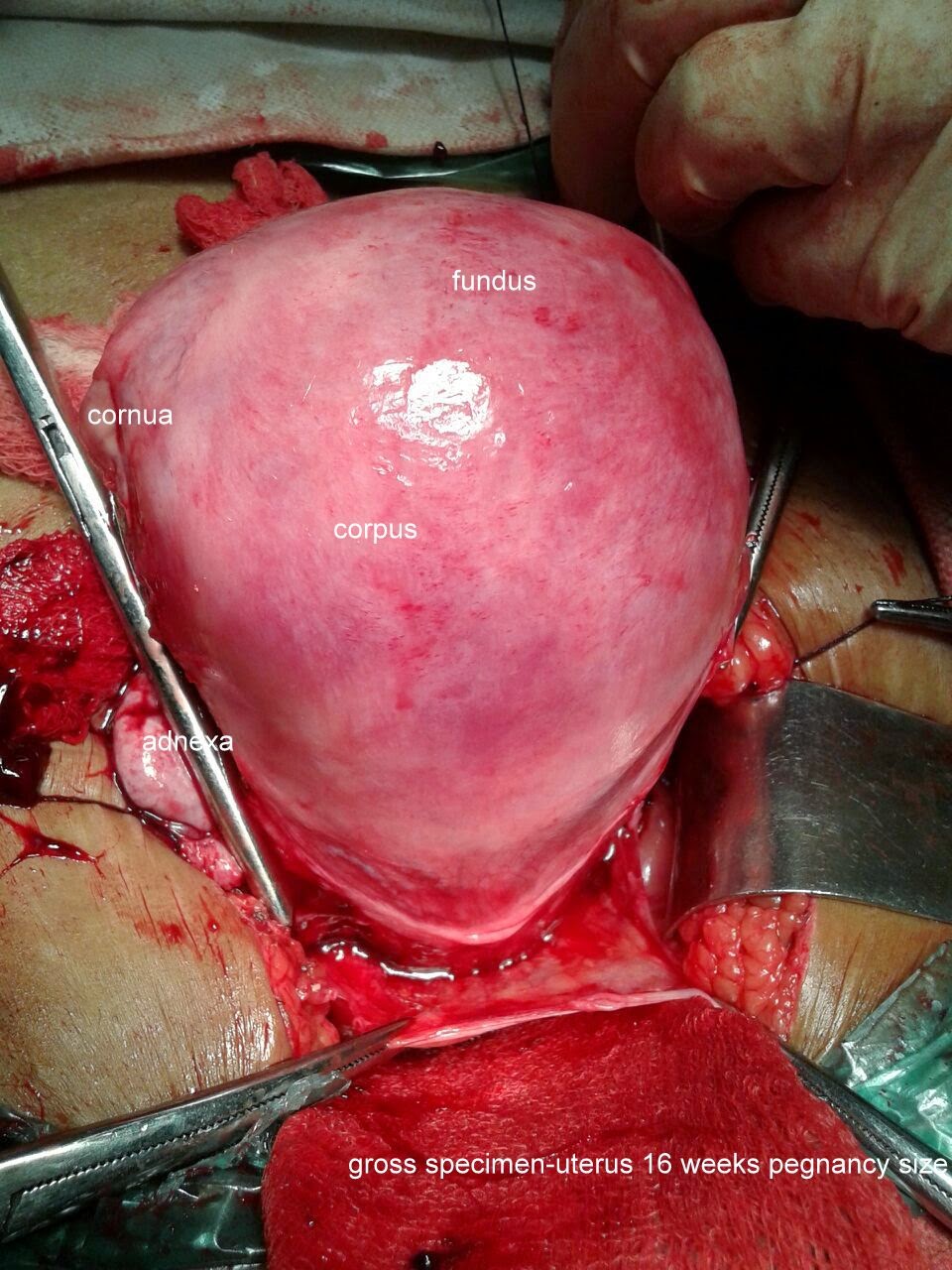 On cut section the endometrium appeared thick and disordered. Myometrium was hypertrophied and trabeculated, measuring 4 cm in thickness, suggestive of adenomyosis. A submucous leiomyomatous polyp was found at the isthmus measuring 1x1x1 cm (figure 2). 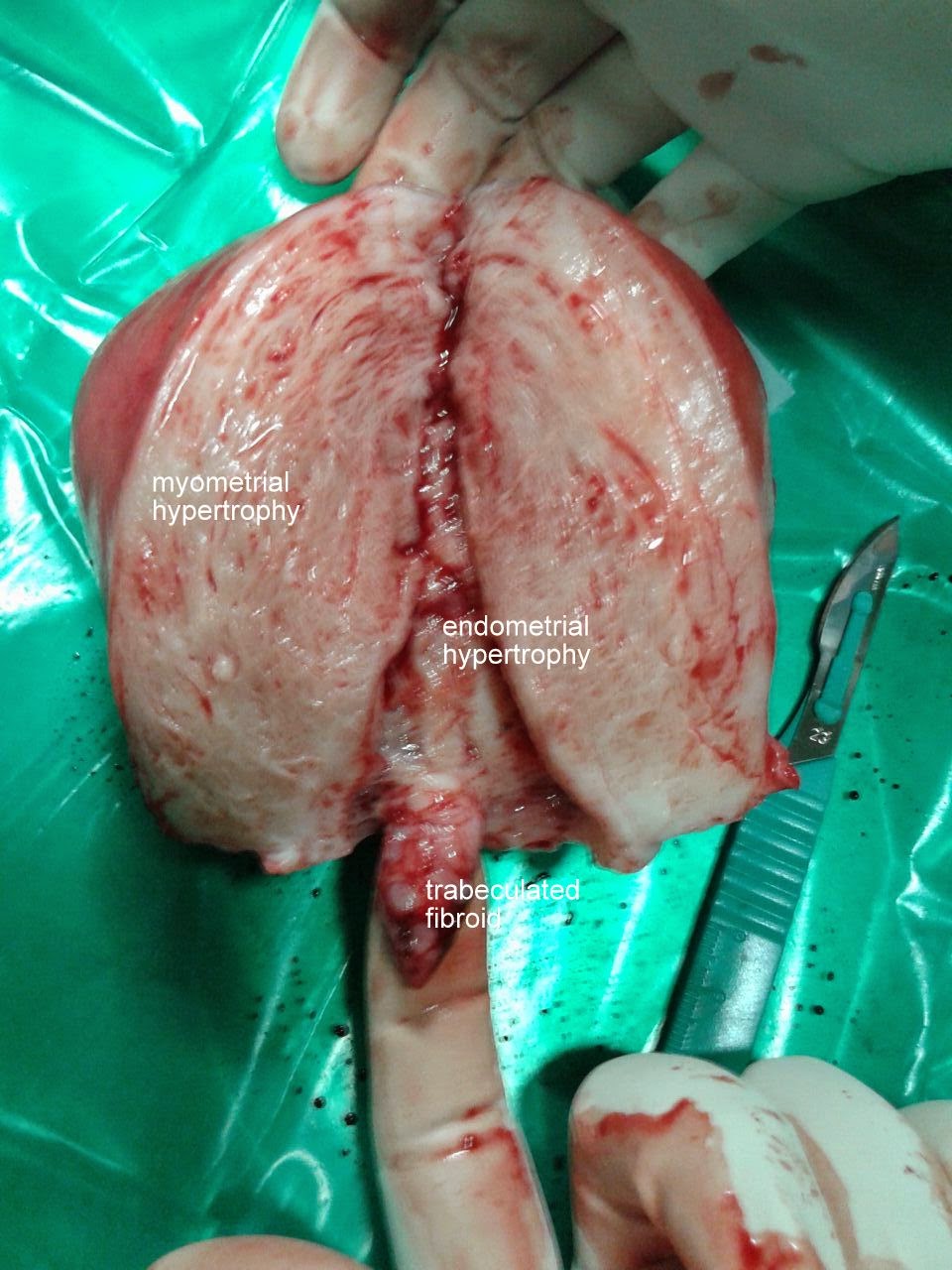 The uterus weighed 680 gm. (normal size of the uterus is 60 g).[3]) On microscopic examination islands of endometrial glands were present within the myometrial tissue which confirmed the diagnosis of adenomyosis. Endometrium was in proliferative phase and submucous trabecular leiomyomatous polyp with no evidence of malignancy was seen.

Adenomyosis usually presents with dysmenorrhea, menorrhagia, and chronic pelvic pain in multiparous women in the fourth or fifth decade of life. Many studies show link between uterine trauma like prior pregnancy or surgery (which lead to disruption between endometrium and myometrium) and adenomyosis. There is also a causal link with various hormones like estrogen and progesterone, which play a role in development and maintenance of adenomyosis. Myometrial hyperplasia is caused by the ectopic endometrial glands which makes the myometrium dysfunctional and inefficient in contracting and stopping the bleeding .Various imaging modalities like transvaginalUSG and magnetic resonance imaging (MRI) are nowadays used for diagnosing adenomyosis.[4] Treatment depends upon the severity of the symptoms and the age of the patient. Mild symptoms can be controlled by NSAIDs, GnRH agonists, hormonal contraceptives, selective estrogen receptor modulator (SERM) like ormeloxifene.[5] In our study the cause of the abnormal uterine bleeding may be the missed out submucous leiomyoma on USG. A hysteroscopy couldn’t be done because the patient always presented in emergency with bleeding. Ormeloxifene controlled the menorrhagia in both the treatment cycles probably by its action on the estrogen receptors on the endometrium. However, while on treatment the uterine size increased. Ormeloxifene’s anti estrogen action on endometrial estrogen receptors is known to prevent proliferation of the endometrium, promote decidualization of the endometrium and  helps in controlling uterine bleeding.[6] Action of the SERM ormelofexine on the myometrium is not reported. Myometrium expresses two types of estrogen receptors α and β. Uterine enlargement and proliferation is regulated by the α receptors.[7] We postulate that ormeloxifene has an undetected action on the myometrial receptors as the uterine size increased from 8-10 weeks to 16 weeks and the uterocervical length increased from 10 cm to 15 cm and myometrial hypertrophy developed while the patient was on the drug ormeloxifene. This enlargement in the uterine size increased the surface area for bleeding, myometrial adenomyosis prevented adequate myometrial contractility and the presence of the undiagnosed endometrial polyp added to the severity of her symptoms. The drug's effects on myometrial receptors should be studied as this may adversely affect the treatment of these patients with abnormal uterine bleeding.