A 28 year old gravida 3 with no living issues with previous one neonatal death and one medical termination of pregnancy (MTP) was registered at our hospital at 22 weeks. She had one preterm delivery 3 years ago. That baby died in neonatal period. She had undergone one first trimester MTP 2 years ago, which had not been successful. So she was subjected to a repeat procedure at a municipal peripheral hospital, which was abandoned due t creation of a false passage, and she was referred to this hospital. She was found to have the missed abortion in the right horn of a bicornuate uterus. An attempt to enter the horn under laparoscopic control failed, a false passage was created between the two horns, and a hysterotomy had to be performed to remove the dead fetus. Two years later she conceived again and registered with us at 22 weeks. She had an ultrasonography (USG) report of 19 weeks gestation with pregnancy in left horn of a bicornuate uterus. Both the kidneys were normal. She had regular follow up in the antenatal clinic. At 33 weeks of gestation, she was admitted with preterm labor and complaints of leaking per vaginum. There was no evidence of leaking per vaginum and preterm labor was controlled with nifedipine. She was given dexamethasone for fetal lung maturity. USG showed evidence of intrauterine growth restriction (IUGR) of he fetus. She was observed in antenatal ward with fetal surveillance. At 35 weeks, USG and obstetric Doppler was performed which showed IUGR with fetal parameters corresponding to 29 weeks and fetoplacental insufficiency. An emergency lower segment cesarean section was performed, delivering the baby weighing 1800 g through a lower segment transverse incision taken on the left horn. The right horn measured 10 cm in length, was of normal shape, and did not show any scar or adhesions (figure 1). The separation of the two horns was up to the level of middle of the cervix, such that there was a single external os, and a separate internal os for each horn. The APGAR scores of the baby were of 9 at 1 and 5 minutes. 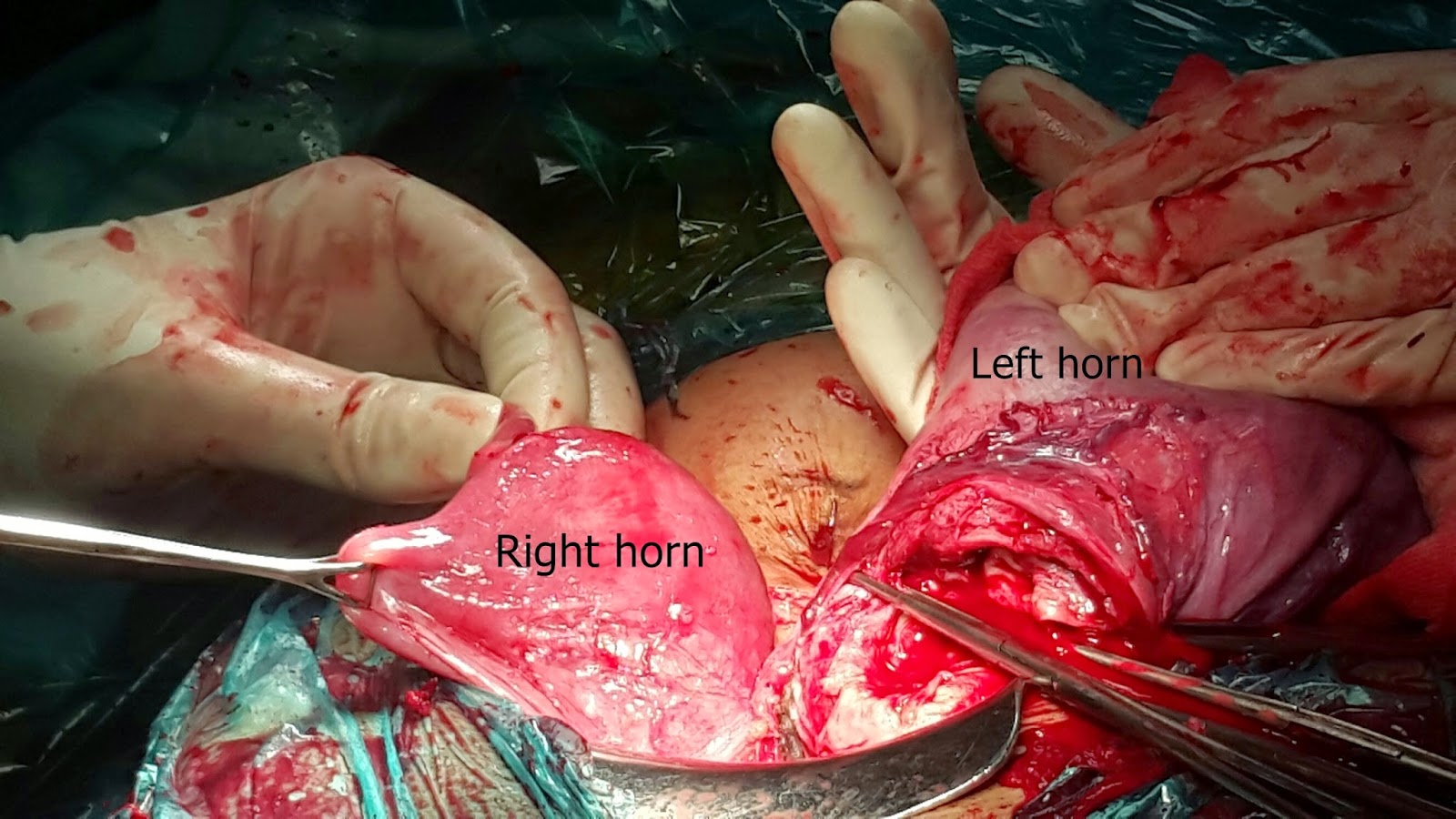 Antenatal diagnosis of a mullerian anomaly is important so as to ensure appropriate management. A study by Hua et al. found that the presence of a maternal uterine anomaly detected at the time of anatomic survey is associated with an increased risk of preterm birth, preterm premature rupture of membranes, breech presentation, and cesarean section.[1]  American Congress of Obstetrics and Gynecology guidelines for management of IUGR recommend serial biomery by USG for monitoring growth of the fetus in pregnancies complicated by maternal mullerian anomalies, to screen for IUGR.[2] Raga et al found that the chances of having a term pregnancy were 60%, with a take-home baby rate of 62.5%.[3] These percentages disagree with previous reports on a poor reproductive outcome associated with a bicornuate uterus. There are some reports which found the poorest prognosis when the defect was partial rather than complete. Bicornuate uterus has single cervix and two uterine cavities. In this case, there was single external os and a separate internal os for each horn. This could explain the failed attempt to evacuate uterine cavity in previous missed abortion. Behavior of such a cervix during labor has not been reported in literature.

When a mullerian anomaly is identified, the woman should be counseled about reproductive prognosis and adverse pregnancy outcome. Though management guidelines exist for most of the mullerian anomalies, some cases require individualized management.