Hysterotomy For Evacuation Of Products Of Conception In A Bicornuate Uterus

Mullerian anomalies increase the potential for complications during pregnancy termination. We present an unusual complication of abortion in a patient with a uterus bicornis unicollis.
A laparoscopy was performed, but the pregnant horn could not be entered under laparoscopic guidance since the axis of the right horn was at an angle of 80-90° with that of the cervical canal. Laparotomy and hysterotomy had to be performed in order to complete the abortion.

The fallopian tubes, uterus, the uterine cervix, and the superior part of the vagina develop from the mullerian ducts. The ovaries and lower third of the vagina have different embryological origins derived from germ cells that migrate from the primitive yolk sac and the sinovaginal bulb, respectively.[1] A number of malformations can occur with disruption of this system. They range from agenesis of the uterus and vagina, their duplication, to minor abnormalities of the uterine cavity. Müllerian malformations are often associated with urinary system and axial skeletal anomalies. In fact, mullerian anomalies are often first detected during evaluation of the patients for the associated conditions. These malformations can affect the reproductive outcome adversely, causing abortions and preterm deliveries, especially in women with unicornuate, bicornuate, didelphys and septate uteruses.[2] Later in pregnancy, unsuspected uterine malformations may present as intrauterine fetal growth restriction due to abnormal placentation, or abnormal fetal positioning related to mechanical factors in the shape of the uterine cavity. Labor, delivery, and third stage problems may occur due to incoordinate uterine muscular activity. Another problem associated with such malformations is difficulty in surgical abortion. We present here a case of such difficulty wile performing rapid cervical dilatation and evacuation of the products of conception.

Case Report
A 29 year old woman with 8 weeks of amenorrhea and features suggestive of an incomplete abortion was referred to our centre from a peripheral hospital after two failed attempts at surgical evacuation of the uterine contents. This was her second conception. In the past, she had a previous preterm vaginal delivery at 8 months of gestation, followed by neonatal demise due to extreme prematurity. In the current conception, she had undergone dilatation and curettage at a private nursing home following an ultrasonography (USG) report of an early embryonic foetal demise. But she continued to have bleeding per vaginum. A repeat ultrasonography at a revealed retained products of conception for which a repeat curettage was advised. At the time of curettage, the suspicion of creation of a false passage led to abandonment of the procedure. She was explained the need for exploratory laparotomy but she declined and was hence referred to our centre for further management. Her per vaginal examination revealed a six weeks sized uterus deviated to the right. Another USG done at our center raised the possibility of a bicornuate uterus with retained products of conception in the right horn. Medical method of termination with misoprostol was not considered due to the history of failed previous curettage and the chance of rupture of an anomalous uterus.[3] The woman was explained the need for performing the curettage under laparoscopic guidance to avoid any false passage or perforation. Consent was also taken for a hysterotomy if the attempt at laparoscopically guided uterine evacuation failed. After appropriate preoperative work up and keeping adequate blood ready, laparoscopy was performed under general anaesthesia. The finding of a bicornuate uterus with pregnancy in the right horn was confirmed. Under laparoscopic guidance, a few attempts at dilatation of the endocervical canal to enter into the right horn were made but they led only into a false passage, which opened between the two horns under the uterovesical fold of the peritoneum. The axis of the right horn of the uterus was 80-90° with that of the cervical canal. Hence a uterine sound, a cervical dilator, and even a cervical probe could not be negotiated into the horn. Finally, a hysterotomy was performed (figure 1) and the gestational sac was delivered en sac from the right horn. A gentle curettage was done through the hysterotomy incision. Then a retrograde dilatation of the endocervical canal was done, passing cervical dilators down the cervical anal passed through the uterine incision and guided by two fingers placed behind the cervix (figure 2). The uterine incision was closed with a continuous stitch of No. 1 polyglactin. The patient made an uneventful recovery. At the time of discharge, the possibility of operative intervention in future pregnancy in view of hysterotomy done during this conception was explained. 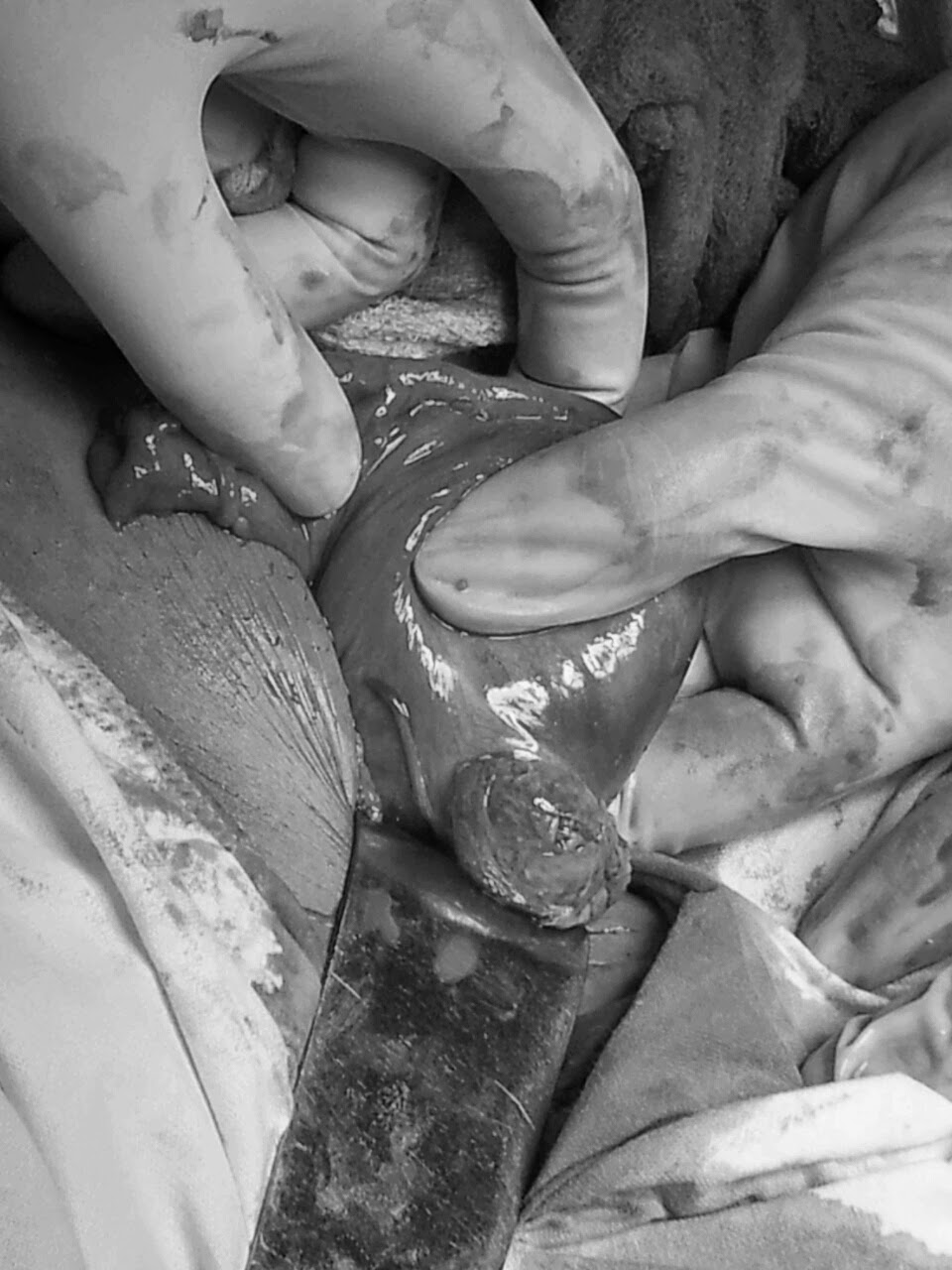 Figure 1. Hysterotomy of the right gravid horn. The gestational sac is being extruded through the uterine incision. 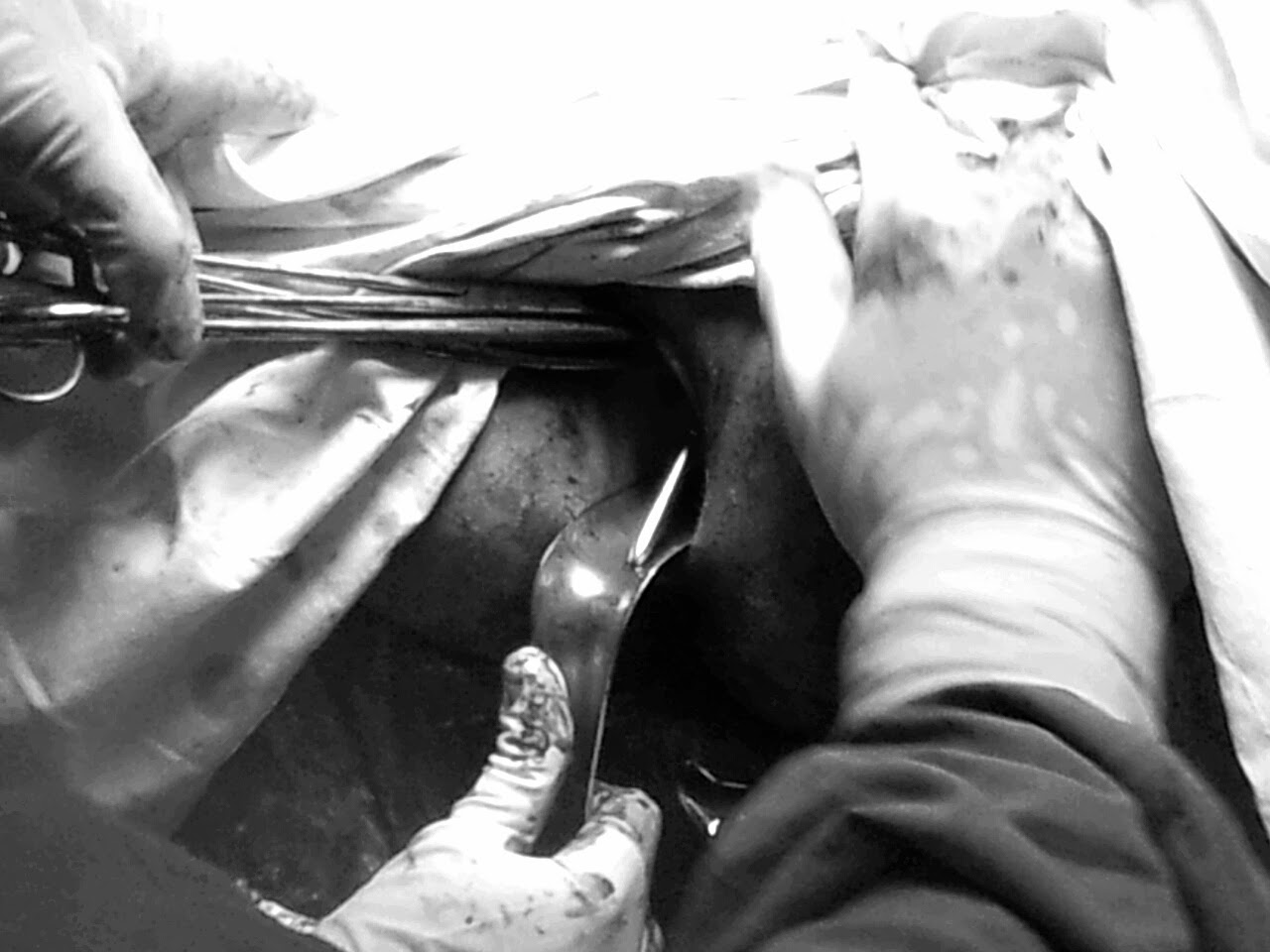 Figure 2. Retrograde cervical dilatation. A cervical dilator is seen exiting from the cervix, passed downward through the hysterotomy incision.

Mullerian anomalies increase the potential for complications during pregnancy termination.[4] Standard procedures of surgical abortion can fail in some of these cases. If the angle between the two horns is wide, an instrument like a uterine sound, cervical probe or dilator passed up through the cervical canal may not enter the uterine cavity early in pregnancy. That would made surgical abortion impossible, or might cause uterine perforation. A hysterotomy should be reserved for such extremely difficult cases when all possible conservative techniques fail. Such a difficulty of alignment of the axis of the uterine horn and that of the cervical canal is usually not encountered during childbirth, owing to globular enlargement of the gravid horn, which comes into line with the cervical canal and the other horn gets displaced to one side. The cervix gets drawn up and effaces and dilated due to uterine contractions, and the problem of nonalignment of the axes of the uterine cavity and cervical canal gets solved.

Conventional approach to surgical abortion can fail in cases of uterine anomaly. A hysterotomy should be reserved for the most difficult and rare instances of such failed abortion.