Takayasu’s arteritis is a rare inflammatory disease of unknown origin affecting the arteries in women of childbearing age. Its optimal management during pregnant patients with this disease has not  yet been  defined. Its course  is not affected by pregnancy. It can have serious complications during pregnancy. A case of aneurysmal aortoarteritis causing intrauterine fetal death is presented.

Takayasu’s aortoarteritis is a chronic inflammatory disease of unknown origin. It usually affects the aorta and its primary branches.  It is most common in young reproductive women. It is seen more often in eastern than in western countries.[1] It can be aneurysmal or non-aneurysmal. The aneurysms are often multiple, more than twice as often fusiform than saccular.[2] The  clinical   features are due to ischemia of limb(s) or organ(s)  due to stenosis of the involved  arteries. Though the disease does not worsen during pregnancy, complications like intrauterine growth restriction (IUGR), fetal death, hypertension, cardiac failure and rupture of the aneurysm have been reported.[3,4,5,6,7,8,9]
Risk of aortic  dissection  is increased due to the presence of chronic hypertension, preeclampsia and pregnancy.

A 27 year old female married since 10 years, gravida 3 with previous one normal delivery and one intrauterine foetal death with 27.3 weeks gestation presented to the emergency department with the chief complaint of lack of perception of fetal movements for one day. There was no other complaint. She presented to us with a ultrasonography (USG) showing absent fetal cardiac activity and a gestational age of 27.3 weeks. The patient was a known case of aortic aneurysm with a USG showing 5.2x3x3.2 cm proximal aortic aneurysm distal to the superior mesenteric artery,  infrarenal aneurysm of size 3.3x3.4x6.7 cm, bilaterally scarred kidneys and bilaterally normal carotids. 2D echocardiography showed mild concentric hypertrophy, ejection fraction of 65% and type 1 left ventricular dysfunction. Computerized tomography (CT) aortogram done prior to the pregnancy showed 5.3x3x2.4 cm aneurysm above superior mesenteric artery, 6.8x 3.3x2.8 cm in the infrarenal aorta and multiple small fusiform dilatations in common iliac and internal iliac arteries. The patient was under regular follow-up with a private cardiologist and was receiving alpha methyldopa and tablet labetalol. She had no antenatal care but was following up with the cardiovascular and thoracic surgery department of our hospital. Her past menstrual cycles were regular and with moderate flow. On examination her general condition was fair. She was afebrile. Her left upper limb blood pressure was 170/110 mm Hg, right upper limb blood pressure was 160/110, and pulse rate 76 per min. There was no pallor, icterus or pedal edema. Respiratory system showed no abnormality. Abdominal examination showed uterine enlargement to 24 weeks' size, and absence of fetal heart sounds. uterus relaxed .On per vaginal examination os was closed , unffecaced. Her hemoglobin was 10.2 gm/dl, platelet count 237000/cmm, white blood cell count 10800/cmm, prothrombin time 13.4 sec, INR 0.99, plasma fibrinogen 300 mg/dl, serum creatinine was 1.3 mg/dl, albumin / globulin ratio 0.7, uric acid 10.7 mg/dl. The intesivist felt the risk of rupture of the aneurysms during induced abortion with prostaglandin and oxytocin was high, and hence a hysterotomy was advised to terminate the pregnancy. A hysterotomy was performed. A macerated fetus weighing 895 g was removed. There were no visible anomalies in the fetus, no knots in the umbilical cord, and no retroplacental clot. The patient withstood the procedure well and made an uneventful recovery. 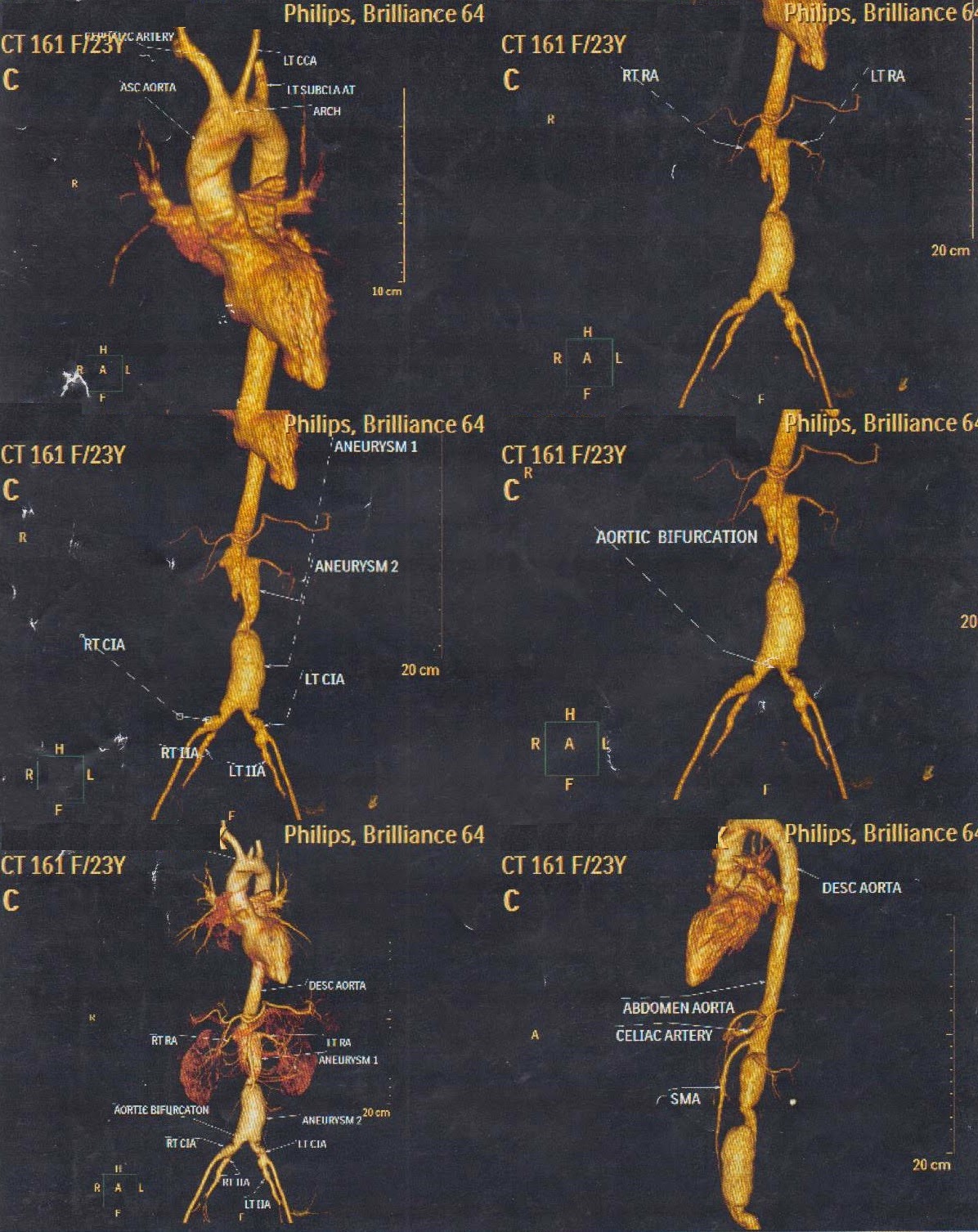 Presence of at least of  three  of  the following six  criteria of the American College of Rheumatology (1990) is  required  for making a diagnosis of Takayasu’s arteritis: age less than 40 years, claudication of an extremity, decreased brachial artery pulse, greater than 10 mm Hg difference in the systolic pressure between the left and the right arm, a bruit over the subclavian arteries or the aorta, and angiographic  evidence  of  narrowing  or  occlusion  of the aorta or its primary or proximal branches.[10] Our patient had three of these criteria. The risk of dissection is mainly during the third trimester, especially between 32 and 38 weeks of gestation, due to the expansion of aneurysm more during labor and delivery.[11] Mandal et al reported IUGR in 51.7% cases,[5] Guilherme et al in 36% cases,[12] and Suri et al in only 16.7% cases.[9] Our patient had chronic hypertension. However the fetus died in utero in the second trimester, in absence of any dissection of the aorta. It was due to poor blood flow in the uterine vessels and resultant poor perfusion of the placental bed. She had another fetal loss of similar nature in the past. Since the risk of dissection of the aorta was considered to be high during a second trimester abortion induced with misoprostol due to uncontrollable hypertension, a hysterotomy had to be performed. The patient was counseled not to plan a pregnancy until the aneurysms had been treated. She opted not to have any more babies, even after correction of the aneurysms.

Aneurysmal aortoarteritis can be associated with obstetric complications like IUGR and fetal death for the fetus, and dissection of the aorta for the mother. The woman hypertension should be controlled with drugs and her aneurysms surgically before planning a pregnancy.