Gestational Choriocarcinoma (GCC) can arise from normal term pregnancy, hydatidiform moles, non-molar miscarriages and ectopic pregnancies. In our case, a 31 year old woman gravida 2 para 1 with irregular vaginal bleeding and pain in lower abdomen was operated for ruptured ectopic pregnancy. At laparotomy 8x6x6 cm purple coloured hematosalphinx like mass was present. Histopathological examination confirmed choriocarcinoma for which she received four cycles of injection Methotrexate. Tubal GCCs are rare but should be considered, particularly if there is a firm mass of ectopic pregnancy.

A 31 year old woman G2 P1L1 was admitted with irregular vaginal bleeding since 3 months and pain in lower abdomen since 7 days. On examination patient was stable and bimanual examination revealed 6 weeks size uterus with tender firm mass measuring 6x5 cm in right fornix. Urine pregnancy test was positive. A transvaginal-sonography showed a well-defined hypoechoic mass measuring 6.4x4.6 cm in right tubo-ovarian region with free fluid in Pouch of Douglas. At laparotomy 8x6x6 cm purple coloured hematosalphinx like mass (figure 1) was present on right side along with 500 ml hemoperitoneum. Right salphingectomy was done. Left side fallopian tube, bilateral ovaries and uterus were normal. Her β-hCG was 4, 37,238mIU/m. Histopathology report was suggestive of choriocarcinoma of fallopian tube. Histopathological examination (figure 2) showed tubal lining at one end and presence of plexiform network of cytotrophoblast and syncytiotrophoblast, with large areas of necrosis and haemorrhage. Extensive sampling of the tubal mass did not reveal any chorionic villi. There was invasion of smooth muscle of the fallopian tube but extension to the serosal surface was not seen. Her chest X-ray and CT scan revealed no signs of metastasis. She received four cycles of injection Methotrexate following which her β-hCG was 2.59mIU/ml. Her one year follow up was uneventful. 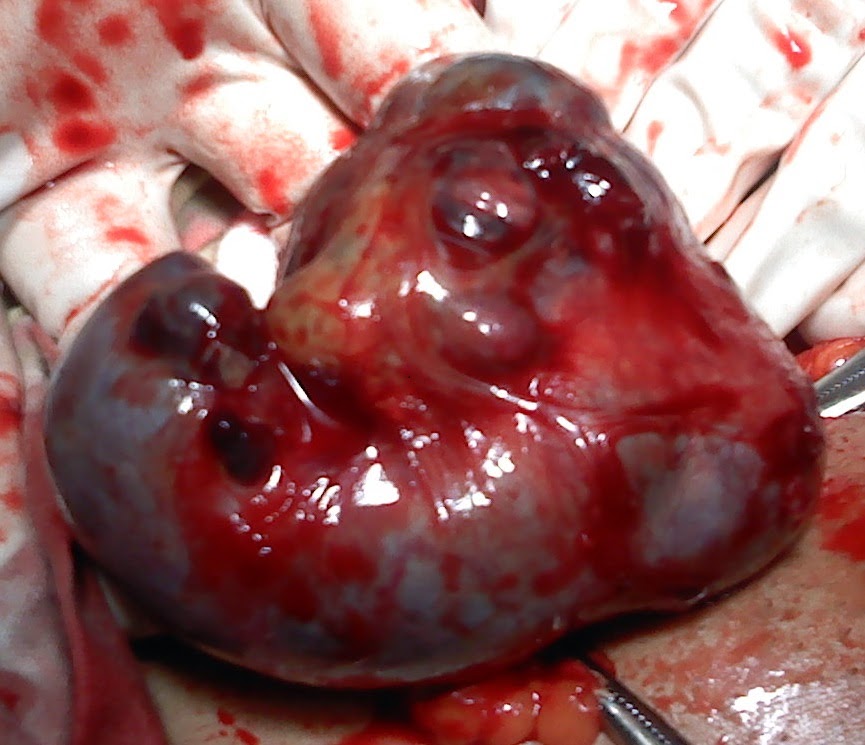 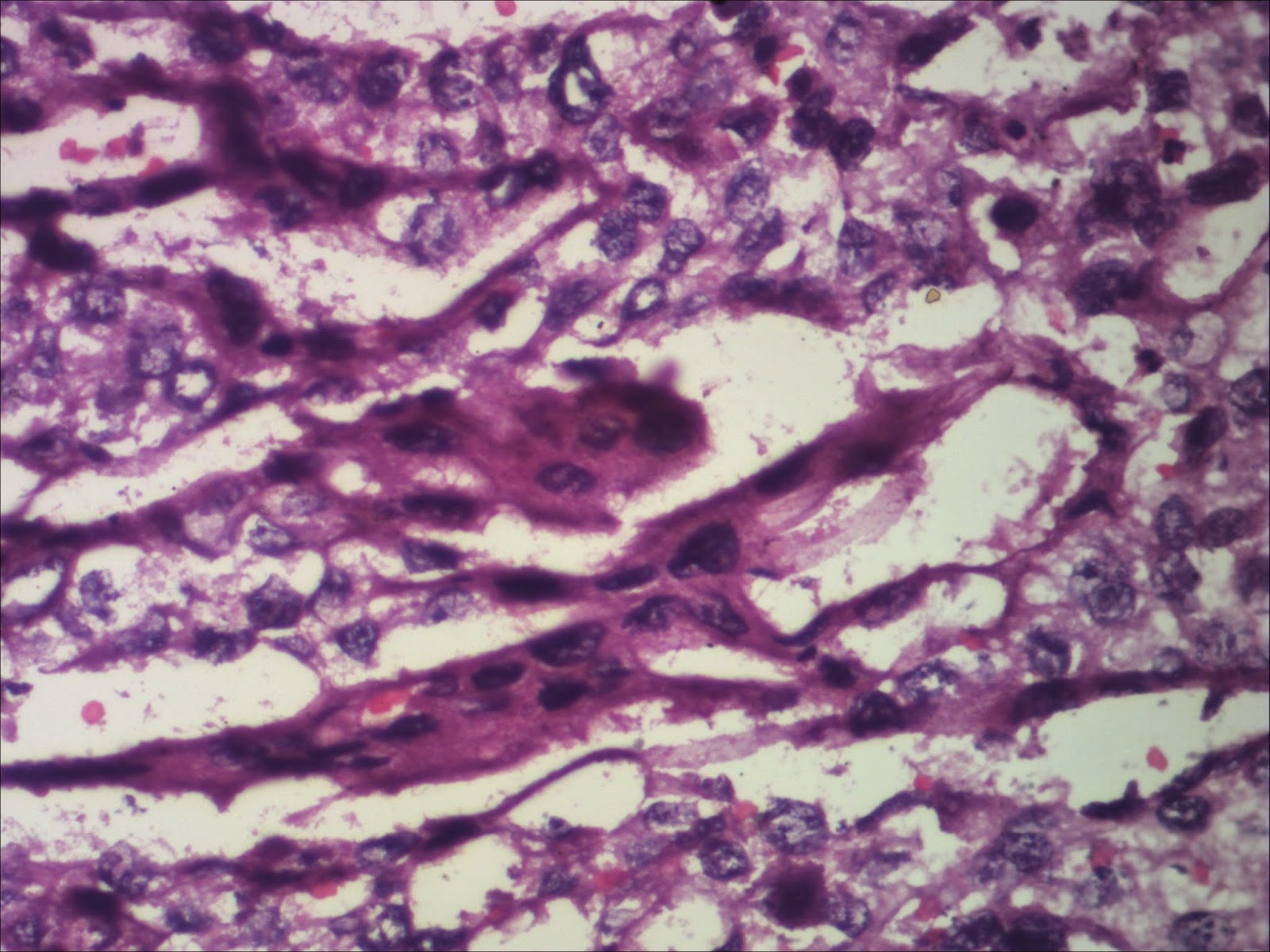 The clinical features of tubal GCC include bleeding, pain and an adnexal mass, which were present in our patient. Half of the cases present with a sudden onset of pain and bleeding. They are often mistaken for ectopic pregnancies until histological diagnosis is made. GCC usually metastasizes to the vagina and lungs, followed by brain, liver and kidneys. Epidemiology of fallopian tube GCC is not yet proved due to limited literature.[2] Tubal choriocarcinoma is mostly gestational, rarely can it be non-gestational. The gestational type arises from tubal pregnancy or metastasis from a uterine choriocarcinoma, whereas the non-gestational type which is extremely rare arises from an aberrant meiosis of maternal genotype. The clinical course of this patient was 3-4 months. This choriocarcinoma could have arisen from a complete hydatidiform mole in the fallopian tube that developed rapidly as there was no evidence of gestational components in the pathological specimen. In our case, the GCC was unlikely to be a metastasis from previous normal pregnancy as her last childbirth was 3 years back and it was unlikely that undetected choriocarcinoma had remained dormant for 3 years. In view of the likelihood that the tubal choriocarcinoma followed an ectopic molar gestation without any metastasis, her modified FIGO/WHO Prognostic score was stage I:4 (2 points for β-hCG and 2 points for size of mass).
Before the advent of modern chemotherapy, GCC carried an almost 90% mortality rate. Some of these deaths were secondary to hemorrhage but the majority were attributable to usually distant metastasis. Choriocarcinoma of the fallopian tube is highly chemosensitive and offers favorable prognosis. Chemotherapy using single or combination drugs is given in most patients following surgery with excellent response similar to our case.[3]
Genotyping and DNA polymorphism analysis can discriminate between gestational and non-gestational choriocarcinoma.[4] In our case genotyping p56kIP2 immunostaining and STR analysis was not done due to economic constraints. Most choriocarcinomas are now treated with combination chemotherapy without distinguishing the gestational from the non-gestational type.[5] Our patient responded very well to single agent chemotherapy as her follow up to 1 year was without any relapse.


Tubal GCCs are rare but should be considered, particularly if there is a firm mass of ectopic pregnancy. Also all ectopic pregnancies with mass of more than 5 cm diameter should have high level of suspicion of GCC, as baseline β-hCG level is crucial in the management of tubal GCC. Histopathological examination of specimen and follow up of patient with report is important part in proper diagnosis and treatment of any patient.