Hysterectomy is a common gynecological operation. A vaginal hysterectomy is the preferred approach for benign pathology. It is considered to be more difficult than an abdominal hysterectomy, because the space is limited and the anatomy is difficult to understand due to faulty orientation.  Fear of injuring the urinary ladder is common in residents in training. This can lead too deep or too superficial dissection. After failure to identify the uterovesical peritoneal pouch, alternative techniques are tried. One such technique is to open it through posterior colpotomy, as in the case presented.

During vaginal hysterectomy it is very important to identify pelvic structures correctly and get appropriate orientation of pelvic anatomy. Otherwise it is very difficult for the operating surgeon to identify tissue planes and perform correct dissection. The limited availability of space further adds to the difficulties while performing vaginal hysterectomy.[1] One of the challenges that surgeon faces is while opening uterovesical fold. The fear of injuring the urinary bladder while opening uterovesical fold can cause error of judgment leading to dissection which is too superficial (and hence into the bladder), too deep (and hence into the supravaginal cervix) or laterally (and hence into the broad ligament).[2,3,4]. In a patient with an atrophic uterus, the uterovesical fold can opened through posterior pouch, when all efforts at opening it through anterior vaginal incision fail.

A 60 year old woman, postmenopausal for 15 years, third para, presented with a third degree uterine descent , cystocoele (central transverse defect), rectocele (left lateral defect) and lax perineum. After investigations for fitness for anesthesia showed normal results, she was subjected to a vaginal hysterectomy, vault suspension anterior colporrhaphy and posterior colpoperineorrhaphy under spinal anesthesia. The operating surgeon was a second year resident assisted by an assistant professor and an associate professor. The anterior vagina was cut transversely and the vaginal edges were held with Allis’ forceps. The urinary bladder was separated from the supravaginal cervix by blunt and sharp dissection. However the uterovesical fold of peritoneum could not be found. The atrophic uterus added to the fear of injuring the urinary bladder while opening uterovesical fold. The posterior pouch was opened by conventional method. The small sized atrophic uterus was delivered through the posterior pouch by making traction on its fundus with a finger passed through the posterior colpotomy incision (figure 1). The urinary bladder was also seen through the posterior colpotomy. The uterovesical fold was identified between the uterine corpus and the urinary bladder. It was held between two curved hemostats and cut open. The uterine corpus was reposited, and the remaining steps of the proposed operation were performed in usual manner. There was no injury to the urinary bladder or even hematuria due to traction on the bladder while delivering the uterine corpus through the posterior colpotomy. The patient withstood the operation well and made an uneventful recovery. 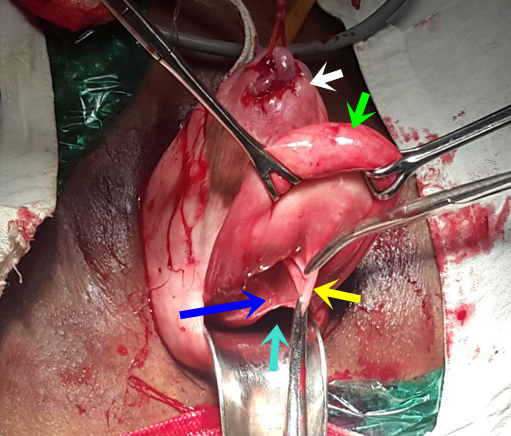 The uterovesical fold of peritoneum is identified as loosely attached fold over the supravaginal cervix and isthmus. It is easily identified in abdominal approach as compared to vaginal hysterectomy. Most of the times, it is easy to identify uterovesical fold unless there are pelvic adhesions or large pelvic tumors causing distortion of pelvic anatomy. During vaginal hysterectomy, pubovesicocervical fascia is dissected to reach the peritoneal fold. Identification of correct plane requires experience. An error can lead to dissection into the urinary bladder, supravaginal cervix, or one of the broad ligaments.[1,3,4,5] The small size of an atrophic uterus makes it difficult to palpate the uterus. This further increases the difficulty in identifying the uterovesical fold. In case of such difficulty, the suggested maneuvers include identification of the bladder by palpation of Foley’s catheter in the bladder and insertion of a bladder sound instead of the Foleys catheter and defining the lower limit of bladder wall.[1,5] If these maneuvers fail, a third maneuver is tried, in which the uterovesical fold is approached through the posterior pouch.[1,5] A finger is passed behind and then hooked over the fundus to pull it backwards and downwards. As the small, atrophic uterus gets delivered through the posterior colpotomy, the urinary bladder also gets drawn along with it, and the uterovesical fold is found between the two. The altered anatomy must be kept in mind, in which the urinary bladder is seen above and posterior to the uterine corpus. The peritoneal fold is then cut between two hemostats. Such extreme steps are taken instead of taking the abdominal approach because a vaginal hysterectomy has to be done in a case of a uterovaginal prolapse, if a hysterectomy is a part of the repair process. A recent Cochrane review of surgical approach to hysterectomy for benign gynecological disease, involving 3643 patients , concluded that vaginal approach is preferred to the abdominal approach.[6]

If the operating surgeon is not adequately trained may find opening the uterovesical fold to be difficult. The surgeon may do dissection in the wrong plane in anticipation or fear of injury to the urinary bladder. Training of resident doctors and adequate clinical experience in performing vaginal surgery will help in reducing such fear. In 1934, N. S. Heaney stated, “it is [my] purpose…to show again how low the mortality and morbidity of vaginal hysterectomy may be with the hope that this operation may find a place in the operative armamentarium of every gynecologist.[4]