Herein is described a case of a 26 year old woman who came with a history of dilatation and curettage done for missed abortion followed by continuous painless bleeding per vaginum. On hysterolaparoscopy, diagnosis of cesarean scar ectopic was confirmed. Laparoscopic excision of scar ectopic with double layered repair of uterus was done.

Cesarean scar ectopic is a rarest kind of ectopic pregnancy. It was first reported by Larsen and Solomon in 1978. Its incidence has been estimated to be 0.15% of pregnant women with prior cesarean deliveries. A cesarean scar pregnancy occurs when there is implantation of a pregnancy within the scar of a previous section, resulting in a gestational sac that is surrounded by myometrium and fibrous tissue. Patients may present with painless vaginal bleeding. Complications such as uterine rupture and massive hemorrhage may be life threatening and impact negatively on future fertility. It is important to be able to diagnose the condition as early as possible in order to administer conservative treatment.

A 26 year old patient presented to us with a complaint of continuous painless bleeding per vaginum since 25 days. She had a history of dilatation and curettage done elsewhere 2 months back for the diagnosis of missed abortion. Since then she had irregular bleeding per vaginum.
She underwent ultrasound 10 days back which revealed an echogenic lesion measuring 3.6 x 3.7 cm noted over the previous scar site and protruding outwards towards the bladder, with anterior myometrium almost deficient. The patient was planned for surgical management.
On hysteroscopy, uterine cavity, endometrial lining and endocervical canal appeared normal. On the anterior wall, just above the internal os, at the level of previous scar site trophoblastic tissues were seen protruding (figure 1). 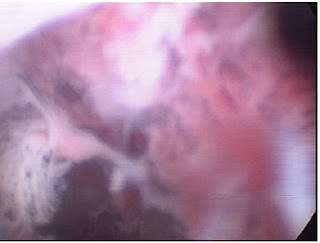 Figure 1 Hysteroscopic image of trophoblastic tissue at the level of cesarean scar.

On laparoscopy, a prominent bulge was seen at the level of lower uterine segment with increased vascularity. Vasopressin (10 units diluted in 100 ml of normal saline) 50 ml was infiltrated at the level of the uterine isthmus. Using harmonic scalpel vesicouterine fold was dissected and the bladder was pushed down. The products of conception were seen bulging through the myometrium. The previous scar site myometrium was opened by transverse incision and products of conception were removed with grasper and suction irrigation (figure 2). Uterine wall was closed using barbed sutures. The vesicouterine fold of peritoneum was closed using polyglactin no 2-0. At the end of procedure cystoscopy was done to check bladder integrity. Histopathology report confirmed the diagnosis of products of conception. 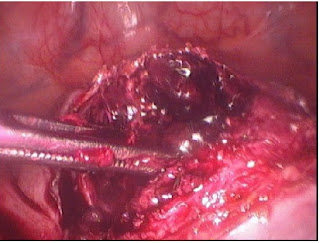 Early diagnosis of cesarean scar ectopic pregnancy is important in order to avoid severe complications and to be able to provide conservative treatment. The most common symptom is painless vaginal bleeding that may be massive. Ultrasound with color flow Doppler has been used to make the diagnosis. According to a recent 2012 review, the following sonographic findings should raise the suspicion level for a Cesarean Scar Pregnancy (CSP).[1]
·        No fetal parts in the uterine cavity or cervix.
·        A thin myometrial layer between the bladder and gestational sac.
·        A triangular shaped gestational sac.
·        A gestational sac that is close to the bladder and uterine wall.
·        Presentation of arteriovenous malformation in the area.
MRI and hysteroscopy have also been used to make the diagnosis. These pregnancies can be confused with cervical ectopic pregnancy. If diagnosed early and the patient is stable then there is an option of conservative treatment available with local and systemic methotrexate administration,[2] dilatation and curettage, excision of trophoblastic tissue using laparoscopy and laparotomy. Other methods are bilateral uterine artery ligation or uterine artery embolization followed by removal of ectopic gestational tissue and repair of uterine scar  by laparoscopy or laparotomy. Use of titanium clips to transiently occlude the uterine arteries bilaterally as an alternative for permanent uterine artery ligation to reduce blood loss during laparoscopic management of CSPs combined with injection of vasopressin into the myometrium to promote haemostasis has been described by Shao et al. Role of transvaginal surgery for removal of ectopic gestational tissue and excision of scar tissue and repair of wound has also been mentioned.[3] Laparoscopy appears to be a rational alternative in the clinically stable women as the excision of old scar by laparoscopy can facilitate complete removal of the products of conception and the microtubular tracts, repair the scar defect, strengthen the uterine wall of the scar area and reduce the risk of recurrence. In cases of rupture and massive hemorrhage, hysterectomy is indicated.