Puerperal sepsis after cesarean section usually presents as systemic features of sepsis plus foul smelling lochia. Sometimes the pus may collect in the uterovesical space if the lower segment sutures give way. A case of a large collection of pus in the anterior preperitoneal space is presented.

The risk of puerperal sepsis should not be high if standard aseptic and antispetic precautions are followed. If the pus drains out of the cervix, the risk to the mother would be less as compared to when it does not drain out fully and spreads to extraperitoneal space posteriorly or anteriorly. Drainage of such collections is very difficult, and risk of complications including septicemia is quite high. A case of a cesarean section with anterior extraperitoneal collection of pus behind the anterior abdominal wall is presented.

A 30 year old woman, para 1 living 1, presented with high fever, vaginal discharge of pus, and abdominal distension for 10 days. She had undergone a lower segment cesarean section in a private hospital 10 days ago, for breech presentation and pregnancy induced hypertension.. She started getting fever from the third postoperative day. She was found to have a positive Widal test and was treated with ceftriaxone. She was sent to us on the 10th postoperative day. On examination, her general condition was poor. Her temperature was 300 C, pulse rate 86/min, respiratory rate 22/min, blood pressure 140/90 mm Hg. Respiratory system showed decreased air entry in the lung bases, accompanied by crepitations in that area. The abdomen was distended, tense, and tender. Peristaltic sounds were normal. The uterus was of 18 weeks' size. The cervix was open and purulent discharge was found to be draining from it. Her hemoglobin was 9.2 g/dl, white cell count 18000/cmm, polymorphs 73%, lymphocytes 16%, platelets 1.8 lakh/cmm, blood urea nitrogen 7 mg/dl, serum creatinine 0.8 mg/dl, fasting plasma sugar 96 mg/dl, serum bilirubin 0.8 mg/dl, SGOT 16 mIU/ml, SGPT 12 mIU/ml, PT-INR 1.19. Abdominopelvic ultrasonography showed the uterus of 16x8x6 cm, and a large collection fluid with internal echoes measuring 22x13x8 cm of above the uterus. A computed tomography of the abdomen and pelvis showed that there was a 23x7.7x21 cm collection of fluid above and in front of the uterus extraperitoneally, deep to the rectus sheath, spread in front of the anterior parietal peritoneum. It was communicating with the collection of fluid in the uterine cavity through a rent in the uterine scar.
A diagnosis of puerperal sepsis after cesarean section, with formation of a large collection of pus in the uterovesical space and the space between the posterior ectus sheat and the anterior parietal peritoneum was made. The collection was drained by insertion of a tube under ultrasonographic control. 1800 ml of pus was drained. She was administered piperacillin-tazobactum, metronidazole and amikacin parenterally. Her blood culture showed no growth of any bacteria. The pus removed through the tube grew E. coli which was sensitive to piperacillin-tazobactum. The The tube continued to drain purulent fluid measuring 200 ml, 150 ml, 110 ml, 70 ml, 50 ml and 20 ml over successive days, while the vaginal discharge of pus ceased. She became afebrile 7 days after the initial drainage. The tube was drained on 12th postoperative day, after it had stopped draining over 48 hours. Abdominopelvic USG done after two days showed no collection of any fluid in the abdominal wall or pelvis. She made an uneventful recovery. She was advised to avoid another pregnancy and counseled to use effective contraception like combination contraceptive pills or condoms. 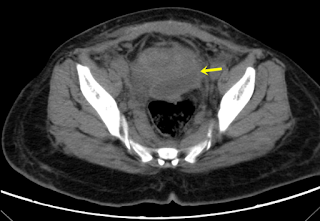 Figure 1. CT Scan of the abdomen at the level of the lower segment incision. The communication between the intrauterine and preperitoneal collections of pus is pointed out by an arrow. 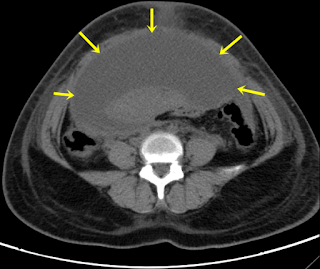 Figure 2. CT Scan of the abdomen at the level of the kidneys. The large collection of pus is pointed out by arrows. 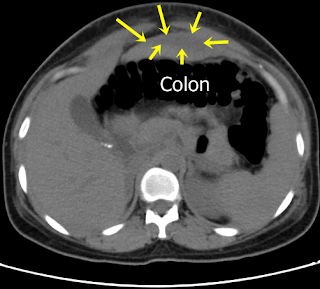 Figure 3. CT Scan of the abdomen at the level of the liver and transverse colon. The large collection of pus is pointed out by arrows.

The peritoneal cavity is a closed sac within another closed sac made of the fascial layer continuous with transversalis fascia. An extraperitoneal abscess may occur between the peritoneum and the deep fascia anteriorly.[1] It may be due to an extension of an abscess in the bladder flap after a cesarean section. Since the peritoneum and the posterior rectus sheath extend upwards until the peritoneum turns backwards under the diaphragm, the pus can track upwards similarly between the fascia and the peritoneum. Though it is a potential space, it can accommodate up to 2000 ml of pus.[2,3]  In the case presented, the patient had fulminant puerperal sepsis after a cesarean section. Part of the pus generated within the uterine cavity kept draining out through the cervix. There was a breakdown of the uterine sutures in the lower segment, so that the pus escaped into the uterovesical space under the uterovesical fold. Since the uterovesical fold had healed, the pus did not enter the peritoneal cavity. It spread upwards, separating the peritoneum from the posterior rectus sheath, reaching cranially up to the level of the liver. After drainage of the collection through a tube drain inserted under ultrasonographic control, and treatment with antibiotics, the production of the pus stopped. As a result, the abscess cavity collapsed, the fascia and the peritoneum came in contact with each other, and cervical drainage of the pus also ceased. The healing of the uterine scar is most likely to be compromised, and the risk of rupture of the scar in a future pregnancy is quite high. A surgical repair of the uterine scar was not considered during the recovery phase of the patient, because the tissues would have been friable and would not heal well in the presence of infection. The patient was counseled about the risk and advised to use adequate contraception so as to avoid another pregnancy.
Use of prophylactic antibiotics indiscriminately results in development of resistant strains of bacteria, which cause nosocomial infections. The case presented had postcesarean puerperal sepsis with E. coli which was resistant to all antibiotics except piperacillin-tazobactum. This was a nosocomial infection, which was most likely due to indiscriminate use of antibiotics for prevention and treatment of surgical site infections. This trend is on the rise, as illustrated by another case report of retroperitoneal abscess formation after a criminal abortion in a private hospital.[4] The only treatment available to such extraperitoneal abscesses in the past was open drainage, if the diagnosis was made at all. With modern imaging techniques and a high degree of suspicion, the diagnosis is easier, and treatment by insertion of drainage tube under imaging control without having to resort to open surgery is possible.[5]

Preperitoneal abscess is a serious condition that may have few localizing signs. It may occur as a complication of a cesarean section. A high degree of suspicion aided by modern imaging techniques like CT and MRI helps make an accurate diagnosis. Early diagnosis and treatment by catheter help reduce morbidity and mortality associated with the condition.