Giant ovarian tumors may distort the anatomy and pose operative difficulties. We present an image study  of a huge ovarian tumor which  had  grown into the broad ligament leaves and distorted the pelvic organ relationship.

Usually large ovarian cysts, displace the uterus to opposite side or downwards . They may also cause displacement of ureters changing their course which increases the risk of ureteric injuries during surgeries. Such masses may also cause compression of the ureters causing hydroureters and hydronephrosis . Obstruction of pelvic lymphatics by such masses may cause edema of the lower limbs.
In our case,  the large cyst had grown into the leaves of broad ligament hence the uterus and fallopian tube were stretched upwards.  The relationship of pelvic organs was distorted which posed challenge during removal of the ovarian mass and hysterectomy. Herewith we share the intra-operative images and how challenges were overcome.

A 45 years old, morbidly obese woman weighing 102 kg presented with abdominal distension for one and a half month, associated with dull abdominal pain and breathlessness on and off .
Her abdomen was non tender and over distended. A large cystic mass was felt arising from the pelvis, extending up to the epigastrium. On bimanual examination, the cervix was high up in anterior fornix, a cystic non-tender mass was felt above it,  while the uterine size could not be assessed due to obesity. Her Ca 125 levels were 26 u/ml. Ascitic fluid tapped in private hospital showed ADA -63 u/l and no abnormal cells. Computerised Tomography reported a  34x25x22 cm sized ovarian multiloculated cystic lesion suggestive of  mucinous or serous cystadenoma. There was no comment on organ relationship distortion.

On laparotomy, a large cyst of the right ovary seen occupying most of the abdominal cavity, it had grown into the broad ligament. A normal sized uterus was seen over the right anterior broad ligament at a level of 2 inches below the level of umbilicus. The right fallopian tube was stretched over the anterior and superior surface of the mass, the fimbriae fanned out over a distance of 3 cm. The left ovary and fallopian tube were normal. The cyst: approximately 35x40x35 cm, smooth surface, large cystic component and nearly 5x 8x 8 cm solid component at the base on right side. 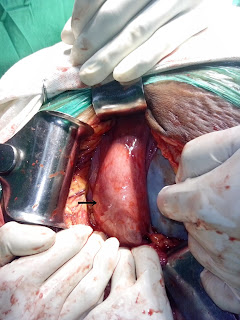 Figure 1: Arrow showing uterus stretched over the anterior wall of the cyst. 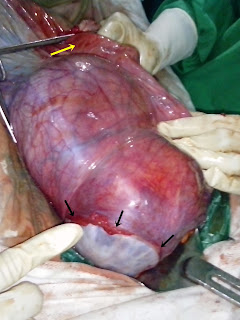 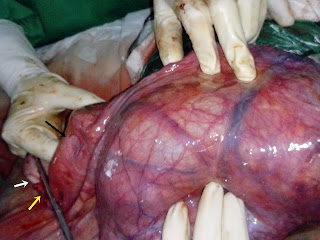 The right broad ligament was opened by division of the right round ligament. The leaves of the broad ligament were cut and dissected off the surface of the cyst, which was then removed along with the right fallopian tube. The cyst contained 14.5 L of fluid, which was serous in most of the part, and mucinous in one loculus. Total abdominal hysterectomy and left salpingo-oophorectomy were performed. Both the ureters were found to be normal in their position and size. Frozen section of the cyst showed a cystic mucinous benign neoplasm. 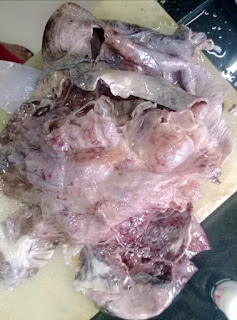 Figure 4. Inside of cut section of the cyst

A large ovarian cyst usually expands the fallopian tube over its surface.[1,2,3] It usually displaces the uterus to the opposite side and either downwards or upwards.[4] What was most unusual in the case presented was the location of the uterus on the anterior surface of the ovarian tumor, 5 cm below the umbilicus. Another unusual feature was the fimbrial end of the fallopian tube stretched over a length of 3 cm. Careful identification of these structures as well as other structures like the ureters and the infundibulopelvic ligament is important in successful surgical management of the case and preventing injury to the ureter.

We thank Dr Rashmi Prasad for taking the operative pictures.