Successful Outcome Of Pregnancy In A Patient Of Aortoarteritis

Aortoarteritis synonymous with Takayasu`s arteritis is also known as ‘Pulseless disease or Aortic arch syndrome’. It is a rare disease causing inflammation, scarring and narrowing of large vessels with formation of aneurysms. We are reporting a patient of aortoarteritis in pregnancy who presented to us at 16 weeks of gestational age with severe hypertension (210/120 mm Hg). Considering her medical condition she was planned for Medical Termination of Pregnancy (MTP). However, second trimester MTP was not performed as she was not fit to undertake that procedure. Consequently her pregnancy continued. A successful outcome was achieved with optimal management of high blood pressure and no change in the disease status.

Aortoarteritis is chronic inflammation of large vessels, specially aorta and its branches. It was first described by a Japanese ophthalmologist Mikito Takayasu in 1908 by reporting association between absences of upper extremity pulse with formation of retinal arteriovenous anastomosis.[1] Aortoarteritis is a rare disease with higher prevalence in Asian and Japanese population. It commonly involves aortic arch in Japanese population whereas in Asian population it commonly involves thoracic or abdominal part of aorta. This disease is common in younger people with higher prevalence in second and third decade of life. So it is not uncommon to encounter it during pregnancy. It is a common cause of severe hypertension in pregnancy. Surgical procedures for stenotic lesions reduce the complications of pregnancy and improves fetal outcome. It requires a team approach of cardiologist, rheumatologist and an obstetrician.

A 32 year old, married, G2P1L1 with previous lower segment cesarean section (LSCS) previously performed for postdatism with fetal distress presented to us at 16 weeks of gestation with blood pressure of 230/110 mm of Hg in right arm and 140/100 mm of Hg in left arm. Her right radial, bilateral femoral and bilateral dorsalis pedis pulsations were almost imperceptible. The patient's condition was diagnosed a year back in 2014 as she had uncontrolled high blood pressure. It was diagnosed by coronary angiography, which showed 80% proximal stenosis of the left anterior descending branch and left circumflex branch (non dominant) of left coronary artery with normal right coronary artery (dominant) as seen in figure 1. 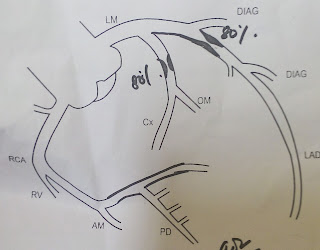 She then underwent percutaneous transluminal coronary angioplasty. Post procedure within a month she again developed severe hypertension for which angiography was done. It showed significant luminal narrowing in descending thoracic aorta with diffuse luminal narrowing in bilateral common, external and internal iliac arteries, bilateral common femoral artery, superficial and popliteal arteries. ACR 1990 criteria were used to categorize this patient as a case of aortoarteritis. She was then referred to our institute for further management. On presentation she was 16 weeks pregnant. Her serological, biochemical profile were normal. CRP was 10.6 ng/dl and ESR after one hour was 40. ANA, ds DNA, cANCA and pANCA were negative. She was referred to us for her obstetric condition and consideration for a second trimester MTP, but MTP was not performed as her hypertension was not adequately controlled within the stipulated time for a MTP. The pregnancy was continued and the patient was under close and regular vigilance of the physician and the obstetrician. She remained well controlled on daily polytherapy comprising of oral sustained release Nifidepine 30 mg 6 hourly, extended release of Metoprolol  50 mg twice a day, Prazosin 5 mg twice a day, and Hydrochlorthiazide 12.5 mg twice a day. Patient was not on corticosteroids as her hypertension was controlled and the disease was not in the active phase. However, at 36.5 gestational weeks her blood pressure recording was 240/100 mm Hg in right arm and 140/100 mm Hg in left arm. She had no proteinuria and no premonitary symptoms of pre-eclampsia. Serological and biochemical profile were also normal. She was admitted, induction of labor and VBAC was planned. Ophthalmic examination excluded any hypertensive retinopathy. Pre-induction mechanical cervical ripening with Foley’s balloon catheter was performed. Cervical ripening was followed by infusion of oxytocin (low dose oxytocin regimen) for induction of labor. Intra partum maternal monitoring was done clinically with the mercury sphygmomanometer and the fetal monitoring was done by intermittent auscultation, fetal doppler and electronic fetal monitoring. However induction of labor failed and late fetal heart rate deceleration's indicative of utero- placental insufficiency was seen on intra-partum electronic fetal monitoring.  An emergency LSCS was performed under controlled general anesthesia under close supervision by the cardiologist and the physician.  Despite the continuation of all her antenatal antihypertensive agents  her blood pressure after induction of anesthesia was dangerously high.  Parenteral labetalol in a single dose of 140 mg was administered immediately after induction of anaesthesia. Male, appropriate for gestational age (AGA) neonate of 2.326 Kg with Apgar score of 4/10, 8/10, 9/10 was delivered. The neonate was observed in neonatal intensive care unit and the patient was monitored in the anesthesia intensive care unit for 24 hours. The patient had an uneventful post-operative course and was discharged on 6th postoperative day. Her blood pressure remained at 150/80 mm Hg in right arm and 100/60 mm Hg in left arm on all four antihypertensive agents. She was advised to follow up with the cardiologist.

Aortoarteritis is found in both the genders. Female to male ratio is about 1.58:1 in India and in Japan.[2] Diagnosis is made by physical examination including difference in blood pressure (BP) in both arms of about 30 mm Hg, asymmetrical pulse, absent pulse and presence of a bruit (94%), bounding pulse as a result of poststenotic dilatation, hypertension (74%) resulting from renal vascular involvement, hypertensive retinopathy, claudication, carotodynia, visual loss, stroke, and heart failure (28%).[3] Causes of hypertension in aortoarteritis include renal artery stenosis, coarctation of aorta, and involvement of baroreceptor and loss of elasticity of aorta. Mainstay of treatment is glucocorticoids (Prednisolone). If the condition remains uncontrolled then Cyclophosphamide, Methotrexate and Azathioprine can also be used. Arteriography is commonly used in the diagnosis of this condition but because of need of contrast and use of radiation, it is not safe in pregnancy and renal disease patients. Magnetic resonance imaging is preferred in such conditions as it can detect the inflammation and diagnose the disease earlier, but it is not able to detect lesions in distal subclavian artery and common carotid artery.[4] High resolution doppler ultrasonography is useful in such condition but has a limitation of less visualization of aorta.[5] The course of the disease remains unaffected during pregnancy.[5,6,7] However, there are increased chances of developing preeclampsia, eclampsia, placental abruption, intrauterine fetal growth restricition and death.  Vaginal delivery is preferred at term.[8] Change in systolic blood pressure during the second stage of labor should be kept in mind and use of instrumental delivery should be considered to cut short the second stage of labor. Poor outcome of disease occurs mainly in severe hypertension with involvement of abdominal aorta. Wong etal showed that abdominal aorta involvement is directly related to fetal weight.[9] There are no reported direct maternal deaths in these cases. Almost 83.9% women deliver a healthy, mature newborn, an incidence of 8.2% of stillbirths and 19.7% of growth restricted neonates have been reported in literature.[10]  In our case in spite of involvement of the abdominal aorta utero-placental circulation was not compromised and an AGA neonate was born. BP should be monitored in all 4 limbs with central aortic pressure monitoring during intrapartum period to prevent hypertensive complications and convulsions. Cesarean section is done only for obstetric indications.

Perinatal outcome in pregnancy in aortoarteritis is satisfactory but it requires close monitoring of the mother and fetus. Pregnancy does not seem to induce the disease activity. Perinatal and maternal death can be avoided by appropriate and prompt management and with co-ordination of obstetrician, cardiologist and rheumatologist.