Limb body wall complex (LBWC), also called as body stalk complex or cyllosomas is a rare polymalformative fetal malformation syndrome of uncertain etiology, which results in malformations of the head, heart, lung, diaphragm, kidney, gonads or limbs. We present such a case who presented at 31 weeks 3 days of gestation with absent anterior abdominal wall and absent left lower limb.

The limb body wall complex is probably heterogenous. Possible mechanisms of its development include disruption of germ disc, vascular system, and amnion. It mainly includes abdominal wall defect and a wide variety of limb anomalies. It can be associated with other visceral anomalies. Two phenotypes have been described, placento-cranial type showing craniofacial defects and amniotic bands and placento-abdominal adhesion type with urogenital anomalies, atresia and abdominal placental attachment with persistence of the extraembryonic coelom.[1] In LBWC, there’s no sex predilection, or known recurrence risk. Karyotype study normal.[2] The case presented here was a primigravida with a fetus of 31 weeks 3 days of gestation with absent anterior abdominal wall and absent left lower limb.

A 22 years old female, married since 2 years, primigravida with  31 weeks 3 days of amenorrhea,  presented with failure of abdominal enlargement as expected. She did not have any past medical or surgical illness. On examination, per abdomen, the uterine size was of 24 weeks. External ballottement positive. Fetal heart sounds were absent. On per vaginal examination, the cervix was closed and uneffaced. Abdominal ultrasonography showed intrauterine fetal demise. There was a single lower limb and exomphalos major. Tablet misoprostol was administered in a dose of 800 micrograms vaginally. She delivered a fetus in breech presentation. The fetus had exomphalos major, absent left lower limb, external male genitalia, and well formed eyes and ears. It weighed 556 g. Her past ultrasonographic (USG) scan showed a fetus in breech presentation with normal cardiac activity, AFI of 5, and no obvious congenital anomalies. A subsequent USG scan performed before presenting to us showed absent cardiac activity and reversal of flow in uterine artery. Placental biopsy revealed infarct with single umbilical artery and single umbilical vein. 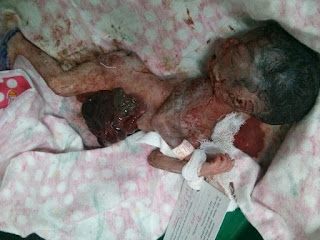 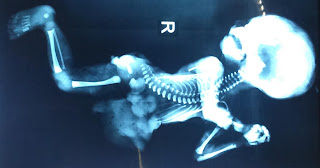 Congenital malformations of the ventral abdominal wall occurs in many forms, ranging from exomphalous to gastroschisis to more complexes such as Pentalogy of Cantrell and LBWC. LBWC includes an abdominal wall defect and is associated with various visceral and limb anomalies. The diagnostic criteria most commonly quoted are those given by Van allen et al in 1987.[3] The presence of two of the following three is required: exencephaly/encephalocele with facial defects, thoraco and/or abdominoschisis, and limb defects. LBWC results from defect in early embryonic folding process. Recurrence in next pregnancy is low. There is no sex predilection.[1] Familial recurrence of one sibling with LBWC  and another with amniotic band syndrome[4], and an occurrence of two siblings born with LBWC[5] have been reported suggesting genetic origin. LBWC should be differentiated from other entities because treatment will vary accordingly. Differential diagnosis includes abdominal wall defects such as gastroschisis, omphalocele , ectopia cordis, amniotic band syndrome, cloacal dystrophy and urachal cyst. They can be differentiated on the basis of site. Ectopia cordis is typically located at the anterior aspect of thorax, omphalocele and gastroschisis are localized to the umbilical and paraumbilical areas. Cloacal dystrophy, urachal cyst involve the lower abdominal wall. Exomphalous is usually seen in trisomies 13, 18, and 21. Pathogenic theories that have been proposed include early amnion rupture theory (exogenic theory)[6], vascular disruption theory (endogenous theory,[3] and embryonic dysgenesis or germ disc defect.[7] Certain drugs, tobacco, alcohol and some other unkown environmental factors are few teratogenic causes leading to LBWC.[5] Cocaine teratogenecity is also associated with LBWC (Viscarello et al 1992).[8] We could not identify any cause in the case presented. Early detection of the condition (prior to 20 completed weeks of gestation) can help the patient make a choice of medical termination of pregnancy.