Abdomino-Pelvic Mass In a Teenager - a Diagnostic Dilemma

Ovarian fibromas are benign ovarian tumorswith incidence of 1-4.7%. Generally found in perimenopausal and menopausal females, they are rarely found in premenarchal teenagers. As they present with nonspecific symptoms they are often misdiagnosed as fibroid or malignant ovarian tumours. Clinical features, ultrasonography in adjunction with tumorsmarkers remain the best preoperative approach to aid diagnosis. Though benign in nature, occasionally raised carcinoma antigen 125 (CA-125) and Meig’s syndrome may be associated and result in poor prognosis. Surgical excision is the treatment of choice and histology remains the gold standard for diagnosis. We report an atypical case of large ovarian fibroma encountered in a premenarchal teenage girl. The case highlights the potential of misdiagnosis due to its presentation, age of occurrence and absence of characteristic symptoms.

Innumerable pelvic masses confront the gynecologist and often lead to diagnostic dilemma. Among these, masses arising from ovaries are not easily identified due to their anatomical location or dynamic nature until they present with symptoms. Amidst the classification of ovarian tumors, ovarian fibromas belong to the group of sex cord stromal tumors; histologically they have stromal origin and are composed of fibroblastic spindle cells which produce collagen. Ovarian fibromas are benign neoplasms of ovary with occurrence of 1 to 4.7%.[1, 2] Though the incidence is low, they are the most common benign solid primary tumors of the ovary.[1] Presenting age is perimenopausal or postmenopausal and rarely below 20 years of age.[1, 2] Even though there is rare documentation of occurrence in a 13-and a 8-year-old patient, till now very few cases have been reported in premenarchal age [1]. Though mostly asymptomatic they may present with nonspecific symptoms like abdominal pain or mass.[1] Generally unilateral and solid in nature, cystic fibromas may also occur.[1, 2] Being solid tumors they are often misdiagnosed as fibroid or as malignant ovarian tumor if ascites and raised CA-125 is found.[3, 4] Due to these reasons, it poses a diagnostic dilemma if encountered in teenage years.

A 13 year old unmarried, premenarchal girl presented in our OPD with intermittent pain in abdomen since 20 days. She noticed a lump in the lower abdomen 15 days ago and complained of intermittent fever since 1 month. There was no history of breathlessness, vomiting, edema or any bowel or bladder complaints. No significant medical, surgical or family history was found. On general examination, the patient was afebrile with stable vital signs. Pallor was present while no icterus, cyanosis, lymphadenopathy or edema was found. Both breast and pubic hair were Tanner stage III. Systemic examination did not reveal any abnormality. On abdominal examination, a midline mass around 16 weeks, tender, firm to hard in consistency with restricted mobility was present. No ascites was demonstrated. On local examination hymen was intact. Urine pregnancy test was negative and preliminary diagnosis of fibroid or remote possibility of a hematometra was made.

Trans-abdominal sonography revealed a solid ovarian tumor of 13 x 10 x 9 cm in the right iliac fossa with arterial and venous flow having resistance index (RI) of 0.3. Uterus was normal in size with an ill-defined endometrial echo. The left ovary could not be visualized. A possible diagnosis of malignant ovarian tumor was made. Computed tomography scan reported a smooth surfaced, solid-cystic lesion on left side measuring 6.5 x 9.4 x 11 cm with vascular pedicle arising from left ovarian vessel. Right ovary and uterus were normal. Few sub-centimeter lymph nodes and minimum free fluid in the pelvis was present. A left ovarian neoplasm of malignant nature was suspected. Based on these suspicions, tumor markers were investigated: CA-125, CEA, β-hCG, AFP were found to be within normal limits. Apart from the routine investigations, chest X-ray, ESR and serum testosterone were also within normal limits. LDH was raised (491.6 IU/L).

With a probable diagnosis of left ovarian tumour of malignant origin, patient underwent exploratory laparotomy after a valid, well informed consent from her parents. A smooth, solid mass of 10 x 12 cm arising from the left ovary with dilated vessels was found as seen in Figure 1. No torsion or adhesions were found. The right ovary and both fallopian tubes were normal. Uterus was infantile. Around 10 ml peritoneal fluid was aspirated and sent for cytology. Omental biopsy was done. Undersurface of liver, diaphragm and colon were normal. Para-aortic lymph nodes could not be palpated. Patient underwent left salphingo-opherectomy and the procedure was uneventful. Patient was discharged on post-operative day 7. 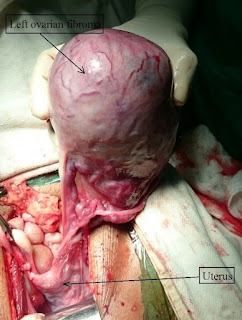 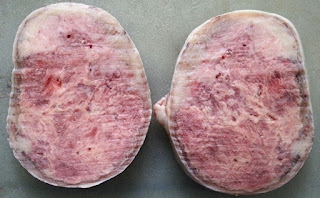 Fibromas are benign stromal tumors composed of spindle, oval or round collagen producing cells arranged in storiform (cartwheel like) pattern. Pathogenesis is obscure but trisomy and tetrasomy 12 have been suggested.[6] These are generally unilateral, solid, mobile tumors of variable size with bilaterality of 0-11.7% [3]. On histopathology, a rare variant called cellular fibroma comprising of absent or minimal nuclear atypia with 1-3 mitoses/10 HPF has been reported. Another variant with incidence < 1% showing moderate nuclear atypia and > 4 mitoses/ 10 HPF having malignant potential is designated as a fibrosarcoma. [2, 3]
Generally diagnosed on ultrasonography as solid masses, fibroma usually appear as homogeneous solid tumors with delayed enhancement on CT. MRI appearance is of a hypo intense mass on T1-weighted images with very low signal intensity on T2-weighted images [1]. The treatment of these tumors is surgical where tumorectomy can be done for young patients or radical treatment for perimenopausal and postmenopausal patients. Even though we performed exploratory laparotomy there are reports of laparoscopic resections with good recovery and shorter hospital stay [3]. A rare but well known syndrome encompassing ascites, pleural effusion and benign solid ovarian tumor known as Meig’s syndrome is found in 1% ovarian tumors and have good prognosis.[2, 5] Ascites and hydrothorax regress after tumour removal.[2] Meig’s syndrome has been commonly found with ovarian fibromas (1-10%).[2, 4] Laparoscopic removal of large ovarian fibroma with torsion and Meig’s syndrome have been reported.[4] There are also documentations of rare associations with Gorlin-Goltz syndrome (multiple basal cell carcinomas, odontogenic keratocysts, calcified falx cerebri, shortened 4th metacarpal), Gardener’s syndrome (multiple adenomatous polyps in colon, sebaceous cysts, osteomas) or Peutz Jeghers syndrome (hereditary intestinal polyposis, melanosis).[1, 2] A relationship between haemolytic anemia and benign ovarian tumors with complete resolution of haemolytic anemia after tumor removal has been reported;[4] however our patient had only mild anemia.

For a solid or cystic adnexal mass where the primary consideration is commonly an epithelial tumor, the possibility of a stromal tumor should also be considered.[1] Due to its rarity and presentation it is often misdiagnosed. Clinical findings, ultrasonography and tumor markers remain the best preoperative approach currently available. Surgical resection is the treatment of choice and histopathology is the gold standard for diagnosis. Prognostic factors have not been fully characterized.