Cesarean scar pregnancy is extremely rare and is associated with serious complications. Hence early diagnosis and therapy is necessary. We report a case of cesarean scar ectopic which presented with multiple episode of first trimester bleeding. Failed conservative management with methotrexate and suspected rupture, necessitated an exploratory laparotomy for excision of the cesarean scar pregnancy. In our case uterine repair could be done, thus preserving the future fertility.

Cesarean scar pregnancy is defined as implantation of pregnancy into a prior Cesarean uterine scar. The incidence of cesarean scar pregnancy is about 1: 2000 pregnancies.[1,2] Its incidence is on the rise, due to increase rate of cesarean section. It is associated with high risk serious complications like uterine rupture and extensive hemorrhage. This condition poses a diagnostic as well as therapeutic challenge, as little is known about the epidemiology, screening methodologies and treatment options.

Elderly, 36 year old, gravida 4 para 3 living 2 and NND 1 married since 12 years was referred to our institute in view of cesarean scar pregnancy. She had previous two normal deliveries, third was hysterotomy at 26 weeks for bleeding placenta previa, with NND on day 21. In the present pregnancy, she had her last menstrual period 3 months back and pregnancy was confirmed with urine pregnancy test at 5 weeks of gestation. At 7 weeks of gestation, patient went to private practitioner for medical termination of pregnancy (MTP). Following MTP, the patient had heavy vaginal bleeding for 6 days and mild bleeding for another 10 days. After that she again started bleeding heavily for which she visited another private consultant. She was advised ultrasonography (USG) of the pelvis, which showed an ill defined complex lesion measuring approximated 5.9 x 5.9 cm at the level of previous lower segment uterine scar. Upper segment endometrial thickness measured 0.6 cm. Uterus measured 12.5 x 6.0 x 4.9 cm. Adnexa was normal. On doppler study there was increased vascularity at the level of the scar, it showed arterial flow R.I of 0.4 and S/D ratio of 1.7. USG findings were suggestive of scar pregnancy. She was referred to our tertiary institute for further management.
On admission at our institute, she had tachycardia of 104 beats/min. Patient had sever pallor. Rest of the general and systemic examination was normal. On abdominal examination, Pfannensteil scar was seen. Uterine size was corresponding to 14 weeks gestation. On vaginal examination, uterus was 14 weeks in size, ante-verted and ante-flexed in position, cervical os was closed, fornices clear and non tender, minimal bleeding was present. One unit whole blood was given in view of severe anemia. USG was repeated at our hospital which showed a heterogenous mass in the region of the scar measuring approximately 5.8 x 4.8 cm, with peripheral vascularity showing high diastolic flow and diagnosis of cesarean scar pregnancy was confirmed. Quantitative β HCG level was 177.84 mIU / ml. Patient and relatives desired future pregnancy so they opted for conservative medical management with parenteral methotrexate. Complete blood count, liver and renal chemistry were within normal limits. Patient was given single dose of intramuscular Methotrexate 80 mg as per body surface area followed by intramuscular Leucovorin 8 mg next day. There was more than 15% decrease in her β HCG level. Repeat β HCG level was 112.55 mIU / ml on day 3 post methotrexate. β HCG level were repeated prior to discharge on day 6 was 70.66 mIU / ml. Patient returned back to the hospital 2 days after discharge with complains of profuse vaginal bleeding. She had tachycardia and hypotension on admission. Urgent USG was performed. USG report showed a 6 x 3.7 x 3.6 cm mass at the region of the previous scar with minimal free fluid in the pelvis, suggestive of probability of a ruptured of the scar ectopic pregnancy. Emergency exploratory laparotomy was performed due to hemodynamic instability and suspected rupture after informed consent for excision of scar ectopic and or emergency hysterectomy if the need arose. Intraoperatively uterus was bulky. Upper segment was normal in size and appearance. Bladder peritoneum was reflected. There was a mass of 3 x 4 cm seen and felt in the lower segment. There was no rupture or abnormal vascularity in the lower segment or at the site of the mass. A small transverse incision was taken at the lower segment at the level of the previous scar. Products of conception were felt in the anterior wall slightly below the level of scar. All the products of conception were removed manually and sent for histopathology examination. About 2-3cm of the lower edge of the incision in the lower segment was excised.The uterine cavity opened inadvertently and was found to be empty. There was bleeding from the lower segment, multiple hemostatic stitches were taken over the anterior lower segment and complete hemostasis was achieved. Uterine incision was closed with continuous interlocking sutures of polyglactin no 1. Hemostasis was confirmed and abdomen was closed. Intraoperatively she received 2 units of blood. Postoperative course was uneventful. Histopathology report was suggestive of chorionic villi, blood clots and myometrial tissue. 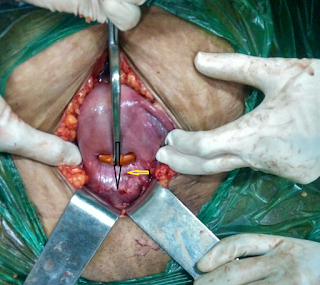 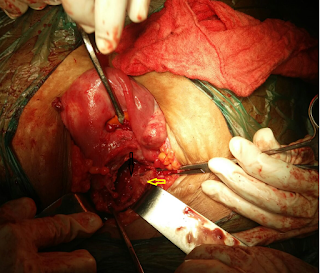 Cesarean scar pregnancy is implantation of otherwise normal pregnancy into a prior cesarean uterine scar. The invasion of the myometrium through microscopic tracts develop from trauma from previous uterine surgeries like dilatation and curettage, myomectomy and cesarean section is believed to be the probable mechanism.[3] It was reported more than 30 years ago by Larsen and Solomon (1978).[4] The incidence of cesarean scar pregnancy is about 1: 2000 pregnancies.[1,2] The incidence is likely to rise due to increase in rate of cesarean section. Whether the incidence is affected with multiple procedure or either one or two layer closure is not known. Clinical presentation of cesarean scar pregnancy varies depending on gestational age which ranges from 5-6 weeks to mid-pregnancy. The most common presenting complain is pain and bleeding. Our patient also presented with multiple episodes of first trimester bleeding and failed MTP. Forty percent of cases are asymptomatic and diagnosis is made during routine ultrasound examination.[1] The probable differential diagnosis for this condition is spontaneous abortion in progress and cervical pregnancy. Risk factors linked with cesarean scar pregnancy are previous cesarean section, myomectomy, dilatation and curettage, manual removal of placenta. It is associated with serious complications like uterine rupture and extensive hemorrhage. The presentation of cesarean scar pregnancy is too variable to have concise recommendation for diagnosis. Hence, a high clinical index of suspicion is required in a woman with a prior cesarean section. Imaging demonstrate myometrium completely around the gestation sac with no communication with the endometrial cavity. USG helps in early diagnosis.[5] If USG is inconclusive MRI can be helpful. Prevention of massive blood loss and conservation of the uterus are the main objective of management of cesarean scar pregnancy. Management depends on gestation age and treatment options include systemic or intra-sac methotrexate treatment, curettage, hysteroscopic resection, uterine preserving resection by laparotomy or laproscopy, uterine artery embolization, a combination of these, or hysterectomy. In our case, methotrexate had shown partial response with falling levels of β HCG, but later onset of profuse vaginal bleeding and ultrasonographic impression of ruptured scar pregnancy necessitated emergency surgery. In earlier gestational age the chances of conserving the uterus is higher as the pregnancy occupies a lesser area and bleeding can be controlled by local wedge excision. However, their future pregnancy results can only be postulated and outcomes can be studied only in the distant future and that too if a registry for such patients is maintained. These patients will most probably be at an increased risk of morbidly adherent placenta, repeat scar ectopic or cervical ectopic pregnancies and will have a greater chance of scar ruptures in future pregnancies and this category of pregnant women will need close observation and monitoring in their future pregnancies.