Heterotopic Conception: A Gynecologist’s Nightmare Due To Rising Trends of Assisted Reproductive Technique

Heterotopic pregnancy is a rare type of multiple gestation consisting of an intrauterine and extrauterine pregnancy. Recently the increased utilization of assisted reproductive technologies have led to its increased incidence. A 26-year old patient treated for polycystic ovarian syndrome (PCOS) by clomiphene citrate conceived heterotopic pregnancy. The patient was admitted to our center with complaint of 6 week amenorhoea, lower abdominal pain, signs and symptoms suggestive of shock. A transvaginal ultrasound scan showed ruptured left tubal ectopic pregnancy with hemoperitoneum and an intrauterine heterotopic pregnancy. It was managed laparoscopically. Considering the literature showing the rising incidence of heterotopic pregnancy in the infertility treated patients as well as in the patients with history of pelvic inflammatory disease, tubal ectopic pregnancy or tubal surgery in the past, every sonologist and gynecologist must have a heterotopic vision because only an early diagnosis and timely treatment, will result in a favorable obstetric outcome without any maternal morbidity and mortality.

A primigravida, 26-year old woman, married since 8 months was admitted to the emergency department with 6 weeks of amenorrhea, with acute abdominal pain, nausea, dyspnea and hypotension. She had conceived while she was on ovulation induction drugs in view of PCOS in a private hospital. Her ovulation induction was done with clomiphene citrate. There was no history of tubal ectopic pregnancy or tubal surgery or pelvic inflammatory disease in the past. Her past medical & surgical history was also insignificant. On general examination, she was conscious with intact orientation and response to all stimuli. Her BP was 90/60 mmHg, and pulse rate was 130 beat per minute. Abdominal examination was suggestive of an acute abdomen with severe tenderness. Her urine pregnancy card test was positive with serum β hCG levels 2100 mIU/ml. Laboratory tests showed Hb 8.2g/dl, WBC count 6700 /mm3, platelet count 2.6 lakh /mm3, her fasting and postprandial blood sugar, coagulation profile and liver and renal function test were within normal limits.
The patient was admitted and initial resuscitation was done with IV fluids. After hemodynamic stability, transabdominal ultrasound was done which demonstrated moderate amount of free intraperitoneal fluid and a normal looking intrauterine gestation of 6 weeks 1 day with crown-rump length (CRL) of 4 mm, with presence of fetal heart activity. Left adnexa showed a gestational sac of 6 weeks suggestive of left tubal ectopic pregnancy.  Both ovaries were seen normal. An emergency laparoscopy was performed under general anesthesia. Findings were suggestive of a ruptured left tubal ectopic pregnancy with about 1.5 L of blood in pouch of Douglas. Uterine size was about 6 weeks gestation.  Both the ovaries appeared normal. A left sided salpingectomy was done with removal of the hemoperitoneum and irrigation and suction of peritoneal cavity. The patient was transfused with 2 units of blood perioperatively. The post-operative period was uneventful. On histology, the tube was found to have chorionic villi suggestive of ectopic pregnancy. An abdominal ultrasound scan was performed post-operatively and a single viable intrauterine pregnancy was seen. The patient was discharged from the hospital next day. The IU pregnancy proceeded without complications. Currently patient is continuing our antenatal checkups and has satisfactory ultrasound growth parameters. 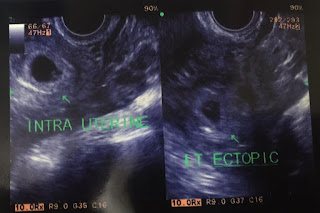 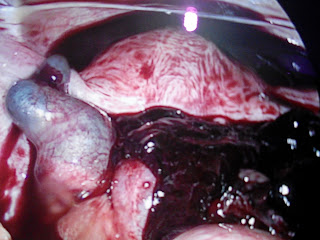