Cesarean scar ectopic pregnancy and morbid adherent placenta though rare in occurrence their prevalence is constantly increasing. Both these conditions present diagnostic dilemma in early pregnancy as well as have similar finding on imaging and on histopathology. We present a case of scar ectopic in previous 2 lower segment cesarean sections (LSCS) with dilemma in diagnosis and histopathological corroboration to morbid adherent placenta.

Cesarean scar pregnancy (CSP) is deﬁned as implantation of trophoblastic villi deep in the myometrium at the site of the previous cesarean scar  during  present pregnancy  and is a rare type of ectopic pregnancy, often leading to substantial morbidity. [1 ] Cesarean section scar pregnancies are thought to occur in 1 in 1800 pregnancies. Of all the ectopic pregnancies seen in women with past cesarean section, CSP is presumed to occur in 6 % of these women. [2 ] Morbidly adherent placenta (MAP) is a condition where placenta is adhered to the myometrium most commonly at previous LSCS scar. Misdiagnosis or delayed treatment can result in uterine rupture, intractable hemorrhage, and other complications. [3 ] The trend toward an increase in the cesarean section rate has also seen an increase in the number of cesarean section scar ectopic pregnancies as well as MAP.[4,5]  Recently multiple authors have put forth a hypothesis for both these conditions to be a part of the same spectrum of pathology progression.

A 28 year-old graida 3 para 2 woman with previous two LSCS and 12 weeks of amenorrhea was referred to our gynecology clinic with a history of attempted suction evacuation done for a missed abortion a week back in a private hospital. During the procedure there was episodic torrential bleeding which stopped spontaneously. Procedure was abandoned but she required transfusion of two units of blood and fresh frozen plasma (FFP) each. The patient was referred to our tertiary care institute for further management.
On examination her vital parameters were within normal range. Mild pallor was noted. Abdominal examination showed a Pfannenstiel scar but no tenderness, guarding, rigidity or lump. On per speculum examination there was blood stained watery discharge, cervix was short, pulled up and cervical os was closed. On per vaginal examination uterus was 12 weeks in  size, anteverted, cervix deviated to left and lower segment was ballooned up. Ultrasound (USG) done initially in private hospital suggested a missed abortion of 12 weeks, while repeat USG done in our hospital after a week of initial USG stated the presence of a 7 × 6 cm heterogeneous hypoechoic lesion in uterus with interphase between lesion and myometrium at fundus and anterior wall obscured. MRI done to delineate detailed anatomy was suggestive of hematoma with retained products of conception. It failed to identify any adherent placenta. Serum β-HCG titers were 282 mIU/ml. The patient's hemoglobin was 8.6 gm %, rest of the reports including coagulation parameters were within normal limits.
With provisional diagnosis of missed abortion, decision for check curettage was taken. Consent was also taken for hysterectomy in view of previous history of bleeding. After cervical priming with misoprostol 400µg, check curettage was attempted during which few products of conception were removed but it was associated with torrential bleeding (figure 1).
A decision to perform obstetric hysterectomy was taken on table.  On opening the  abdomen the uterus was normal in size but the cervix was ballooned up to about 10 cm in diameter, uterovesical fold of peritoneum was extending above the mass, previous LSCS scar was thinned out and had a bluish discoloration (figure 2).

The products of conception were seen adherent to the previous scar site, which were removed and hysterectomy was done. The patient needed transfusion of 4 units of whole blood and 4 FFPs. Blood loss was about 2 L. She was discharged on day 5 of surgery with uneventful postoperative course. Histopathology of specimen showed the corpus endometrium to be proliferative, myometrium to be unremarkable. Cervix had foci of hemorrhage and numerous congested blood vessels but no chorionic villi. Excised scar that was sent separately showed myometrium with chorionic villi and adherent blood clots. No decidual tissue was seen. Products of conception that were evacuated by suction showed blood clots with infarcted chorionic villi. 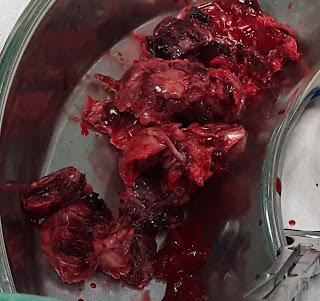 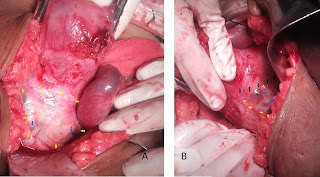 Figure 2A and 2B. Ballooned out scar on the lower segment. Yellow arrows demarcate the ballooned out lower segment. Bluish discoloration is marked out by blue arrows. Black arrow delineates the previous scar. C is uterine corpus. 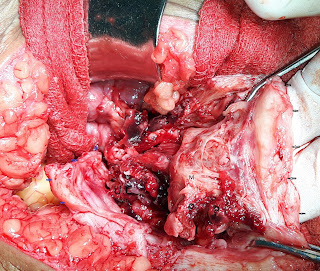 Many theories explain the occurrence of intramural ectopic pregnancy. Invasion of the uterine muscle by the blastocyst through tiny, microscopic breaks or paths best explains the genesis of this condition. These are probably the  result of trauma from a previous cesarean section or any other uterine surgery or even after manual removal of the placenta.[3,6] Same mechanism is also proposed for the development of MAP.
Vial et al proposed 2 types of scar ectopic pregnancies.[7] In the ﬁrst type,  implantation of the gestational sac occurs on the uterine scar. This then progresses away from the uterine serosa and can grow either toward the cervico-isthmic space or towards the uterine cavity. Such a pregnancy may proceed to term developing in MAP, but with an increased risk of life-threatening massive bleeding from the site of implantation. In the second type pregnancy implants deeply into the scar tissue and its growth then progresses towards its external or the serosal layer. This culminates in rupture and bleeding during the ﬁrst trimester of pregnancy. Some authors believe that the difference between those 2 types of pregnancy is of paramount importance to delineate development to MAP vs scar ectopic.[8] Typically, the diagnosis in both conditions is made based on ultrasound evaluation of the uterus and conﬁrmed by MRI or during surgery. Sonography combined with Doppler ﬂow imaging has been advocated as a useful diagnostic modality, with no need for a pelvic MRI for conﬁrmation.[4,5]
Timor-Tritsch et al did histological correlation in total of 58 cases (37 CSP and 21 MAP).[9] Finding of various degrees of invasion by trophoblastic villi into the uterine muscle or into the previous cesarean scar tissue associated with absent or scanty intervening deciduas as consistent with the classic definition of morbidly adherent placenta was also found in cases of CSP.
Nagi et al reported a case of viable scar ectopic diagnosed in early pregnancy. The pregnancy was allowed to progress with meticulous follow up. By end of second trimester USG features were suggestive of placenta previa with accreta. Timor-Tritsch et al in a similar study followed 10 cases of CSP diagnosed in early pregnancy.[9] All 10 patients were diagnosed before 10 weeks gestation and subsequently exhibited signs of MAP on USG. Nine of the 10 patients delivered live born neonates between 32 and 37 weeks with cesarean hysterectomy. The 10th pregnancy was similar to our case. She had excessive vaginal bleeding requiring hysterectomy, at 20 weeks. All patients had histological features suggestive of MAP similar to histological features in our case.
We also support the hypothesis of MAP and CSP having similar origin. We feel that our patient had type 1 of scar ectopic pregnancy due to which products of conception were retrieved from the cavity during suction. Presence of chorionic villi in between the myometrium with absence of decidua suggests the formation of a MAP. As the fetal demise occurred she presented for evacuation. Had fetal demise not occurred she may have presented in advanced pregnancy with morbid adhesion of placenta. If CSP can be diagnosed in the first trimester as in our case then the woman may be able to choose to continue the pregnancy (expectant management ) or opt to terminate the pregnancy. The women willing for expectant management and continuation of pregnancy should be followed up in high risk obstetric center with facilities to manage morbidly adherent placenta. This case is being presented to highlight the fact that both these conditions could be two ends of the same spectrum.