Acute neurological diseases complicating pregnancy are rare, yet they lead to devastating complications if not treated in time. Intracranial hemorrhage (ICH) leading to stroke is a life -threatening complication which is even more devastating when it occurs in a young patient of childbearing age. We report a case of a young woman who presented in third trimester with severe headache, acute confusional state and right -sided hemiparesis and was diagnosed as a case of intracerebral bleed on MRI brain. She required an emergency LSCS in maternal interest as the chances of the intracranial bleed increasing in size or the chances that an aneurysm if present, would rupture, were higher if she were allowed to progress spontaneously into normal labor. Patient was discharged with no neurological deficit.

Stroke, the sudden onset of brain dysfunction from a cause involving blood vessels is one of the most common causes of long-term disability.[1] It is defined as acute onset of focal neurological dysfunction without any other etiology. Diseases of the cerebral blood vessels are the most common causes of death in the developed world after cardiac diseases and cancer.  Differential diagnosis in a patient with acute focal stroke is primary /secondary cerebral tumors, subdural hematoma, cerebral abscess, Todd’s paresis, demyelination, hypoglycemia, encephalitis and hysterical conversion especially in patients who are likely to become pregnant.[2] In pregnancy, stroke is commonly seen in the late third trimester and immediate postpartum period. Intracranial hemorrhage leading to stroke is a life threatening complication carrying a 35 – 83 % maternal mortality risk.[3] The incidence of ischemic and hemorrhagic stroke is similar, being 3.5 - 5 per 1,00,000 pregnancies in developed countries.[4] Various causes of stroke described in literature include those that occur in young non-pregnant patients, and those that are seen only due to pregnancy. Diagnosis that are specific to pregnancy are pregnancy induced hypertension, amniotic fluid embolism and postpartum vasculopathy[5,6] and those not specific to pregnancy include venous sinus thrombosis, embolism due to cardiac or CNS causes or SLE  and rupture of an arteriovenous malformation or a cerebral aneurysm rupture; the last two causes being most common.[7,8]

A 26 year old woman, second gravida with previous full term normal delivery was referred to our casualty at 36 weeks of gestation in view of acute confusional state with right sided hemiparesis. Patient was antenatally registered with a local municipal hospital with regular antenatal visits and had no significant medical or surgical illness. She had history of sudden onset of headache followed by loss of speech and inability to use right upper and lower limbs. Patient was brought to our hospital in a drowsy state, responding only to deep pain. She was immediately admitted to the medical intensive care unit. On examination her general condition was poor, she was drowsy and responding only to deep painful stimuli; vital parameters were stable, with pulse of 94/min and BP of 110/80 mm of Hg. Per abdomen examination revealed uterus corresponding to 34 weeks size with cephalic presentation, regular fetal heart rate of 140 bpm with minimal activity. Per vaginal examination findings were suggestive of early labor. Cardiovascular and respiratory system examination were within normal limits. Neurological examination was suggestive of a Glasgow Coma Scale (GCS) score of 6/15, with normal muscle power in all muscles except for right upper and lower limbs, where it was 2/5. Complete blood count showed hemoglobin of 10 gm%; platelet count was 2.5 lakh /mm3. Her INR was 1.1. Liver and renal function tests were within normal limits. Urgent MRI brain was done which was suggestive of large hemorrhage of 6.5 x 2.9 x 4.7 cm in the frontal region of the left cerebral hemisphere causing a midline shift of 6 mm to the right side. MR venogram of cerebral venous sinuses was done which was normal. Urgent neurosurgery opinion was sought and emergency LSCS was advised in maternal interest as the chances of the intracranial bleed increasing in size or the chances that an aneurysm if present would rupture were more if patient was allowed to progress spontaneously. Neurosurgical intervention was not advised. Patient was evaluated by the anesthesiology team and emergency LSCS under general anesthesia was done with very high risk consent. She delivered a male child of 2.1 kg with an Apgar score of 9/10 at one minute of life. The procedure was uneventful and she was shifted back to the medical intensive care unit for further medical management. Patient was on ventilator in the post-operative period. Medical care included intravenous antibiotics in the form of Piperacillin and Tazobactam to prevent ventilator associated pneumonia, along with fluid therapy and injection mannitol to control the intracranial tension. Supportive physiotherapy was also instituted. Patient remained in the same condition for almost seven days after which she started showing signs of improvement. Her GCS improved to 8/15. CT scan of brain on the tenth post-operative day revealed a marked decrease in the size of the hemorrhage to 4.7 x 1.3 cm. Patient was managed conservatively with no neurosurgical operative intervention as advised by neurosurgeons. Gradual weaning was done from the ventilator as there was improvement in her GCS score and she was extubated on day 22 post- LSCS. Her muscle power in the right upper and lower limbs improved to 4/5 and patient was completely conscious, oriented to time, place and person and was able to perform her daily activities. No active neurosurgical intervention was advised. She was discharged and asked to follow up with interventional radiologist after two months. 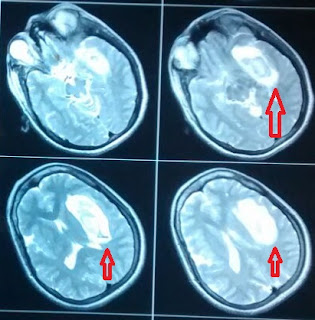 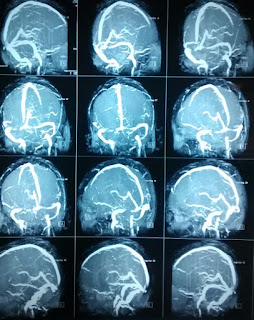 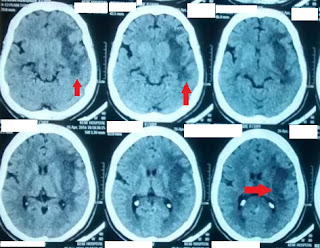 Figure 3. CT scan post-delivery: A decrease in the size of the bleed as shown by the red arrow.

Various studies have found that pregnancy induced hypertension and AV malformations are the most common identifiable causes of ICH in pregnancy.[8,11] Of the 15 % of cases caused by hemorrhage, about half of them occur due to breach in the continuity of a blood vessel within the brain parenchyma, i.e. primary intracranial hemorrhage resulting in stroke, as seen in our patient. The other possible differential diagnoses in this patient could be either rupture of a small micro-aneurysm or AV malformation, but MR venogram done at the time of admission showed normal venous sinuses. Hence these diagnoses and that of any thromboembolism were ruled out. If the artery ruptures into the brain parenchyma and also into the subarachnoid space it is said to be a case of subarachnoid hemorrhage; these patients may present with acute focal stroke.[1] Hemorrhage frequently occurs into an area of brain infarct and clinical presentation of such patients is practically similar to those patients with primary intracerebral hemorrhage.
ICH can be extradural, subdural, subarachnoid or intra-parenchymal. Intracerebral hemorrhage contributes to maternal mortality to a large extent. The risk of ICH associated with pregnancy is greatest in the postpartum period [9] and is responsible for 5–12 % of all maternal deaths.[10] Brain MRI and MR venogram are generally considered as the most important diagnostic tools in patients with ischemic stroke and cerebral venous thrombosis, respectively. The gestational age and the risk–benefit ratio should be taken into consideration before planning these tests. The risk from MRI is generally considered lower in the second trimester. A suspicion of subarachnoid hemorrhage is made in pregnancy when patients present with sudden onset headache with altered sensorium, vomiting and neurological deficit. These symptoms may be mistaken for preeclampsia, more so if they are associated with albuminuria.  To confirm the diagnosis CT scan should be done after adequate hydration and with abdominal shield to prevent fetal hazard. Severe PIH is the most common cause of PRES i.e. posterior reversible leuko encephalopathy syndrome, which is usually associated with reversible vasogenic edema, typically in the posterior portion of the brain. Most likely cause of PRES syndrome is auto- regulation abnormalities.[12] PIH also has been associated with the group of reversible cerebral vasoconstriction syndromes, where patients present with clinical symptoms like thunderclap headache which sometimes may be associated with neurologic deficits, along with reversible arterial segmental vasoconstriction.[13] These two reversible syndromes may go undiagnosed because the primary manifestation may be headache and visual scotomas, and priority in these patients is induction of labour and delivery.[14] These postpartum vasculopathies may be seen in patients totally uncomplicated and without the history of PIH. Investigations include cerebrospinal fluid analysis that is usually normal and imaging studies like angiography that may show multifocal narrowing in vasculature giving a picture similar to vasculitis. Maternal morbidity and mortality associated with postpartum angiopathy may be due to the associated infarction / hemorrhage.
The risk of rupture of small aneurysms or arteriovenous malformations during pregnancy is due to increased plasma volume, cardiac output, and changes in the vessel wall.[15]   Also other rare causes in pregnancy may be due to metastatic choriocarcinoma or substance abuse like alcohol and amphetamines,[16] postpartum cardiomyopathy that can result in embolism, or less commonly, watershed infarction from hypotension.
Prevention of stroke during pregnancy in high-risk patients is similar to that used for thrombo-prophylaxis, with either unfractionated or LMWH in the 1st trimester, followed by warfarin, then heparin until delivery and warfarin in the postpartum period. Successful reperfusion is the treatment of choice. In the near future recombinant tissue plasminogen activator may be used to treat pregnant patients with acute stroke as interventional radiologists discover novel imaging modalities like MRI perfusion. In addition to these, direct thrombin inhibitors like dabigatran may be used in pregnancy for women who cannot be given heparin or warfarin. Dabigatran is currently US FDA category C drug and experimental research in humans will be required to find out the safety profile and the risk–benefit ratios.

Intracerebral bleed is a major cause of maternal morbidity and mortality and though the incidence of this devastating condition is variable, it presents special challenges in diagnosis and management. Research is required to formulate guidelines for prevention and treatment in pregnancy, since there is paucity of data available regarding the safety profile of common drugs, such as aspirin, aspirin/extended-release dipyridamole and clopidogrel. Multidisciplinary approach involving neurosurgeons, intensivists and obstetricians is of prime importance in the management of ischemic stroke or hemorrhage.