Incidence of unicornuate uterus with communicating horn is 1 in 100000.[1] Pregnancy in rudimentary horn is extremely rare with incidence of around 1 in 76000 to 1 in 140000 pregnancies.[1] It is a form of ectopic gestation.

22 years old patient, married since 6 months, primigravida with 16 weeks of gestation was referred to our tertiary care center in view of intrauterine fetal demise with ascitis. Patient was registered at private hospital and had a single antenatal visit. No ultrasound was done during antenatal period. She had complaint of vomiting since 2 days and pain in abdomen since 4 hours. She visited a private hospital where ultrasound was done which was suggestive of intrauterine fetal demise of 16 weeks with moderate ascitis.
On arrival to our emergency room, she was conscious and well oriented. On examination her pulse was 120 bpm  and blood pressure was 100/60 mm of Hg suggestive of shock. Marked pallor was present. On abdominal examination, distension, guarding and rigidity were present; uterine size could not be assessed. Her external genitalia were normal with normal cervix and vagina. On vaginal examination, uterus was 12-14 weeks size, ill defined, tender on palpation. There was no bleeding per vaginum. Urgent ultrasonography was suggestive of primary intra abdominal pregnancy with placenta in the pelvis and fetus in the epigastric region with no fetal cardiac activity, with moderate hemoperitoneum. Abdominal paracentesis confirmed hemoperitoneum. As the history, clinical findings and the two sonography reports were not consistent, urgent CT scan was done which was also suggestive of primary abdominal pregnancy with hemoperitoneum. The right renal fossa was empty with cross fused ectopic kidney and  both the kidneys were seen in left renal fossa; congenital block vertebrae at L3-L4 and mild dorsolumbar scoliosis with concavity to left side were also noted on CT scan. Her hemoglobin was 4.1 gm/dl, WBC count of 18,400 cells/cmm, platelet count of 2.4 lac/cmm and serum creatinine was 0.9 mg/dl. DIC profile was normal.
Emergency exploratory laparotomy was done through midline vertical infraumbilical incision under general anesthesia; surgeon and urologist were on standby for presumptive diagnosis of abdominal pregnancy with hemoperitoneum with renal anomaly. Hemoperitoneum of 500 ml was present. Fetus of approximately 16 weeks attached to placenta was present in peritoneal cavity; however this was not an abdominal pregnancy. Uterus was seen in the midline, with a large communicating rudimentary horn of approximately 5 × 4 × 4 cm on right side, in which pregnancy had occurred. This had ruptured and extruded the fetus into the peritoneal cavity, however the placenta was still attached to the fundus of the horn. Both right and left fallopian tubes and ovaries were normal with unicornuate uterus. Fetus and placenta were removed. Right rudimentary horn was excised after tracing both the ureters. 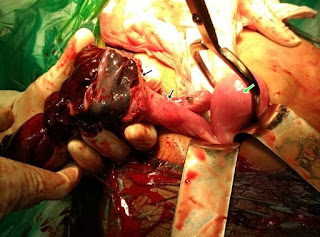 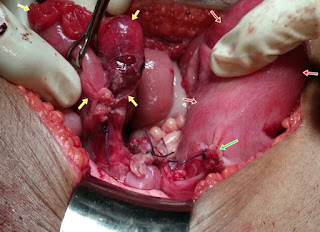 Three units of packed red cells and four fresh frozen plasma were given perioperatively. Patient withstood the procedure well. Her postoperative recovery was uneventful. She was discharged on day 5 and advised to use contraception for one year.

Female urogenital tract anomalies are not uncommon. The incidence of Mullerian anomalies is around 0.1- 3 % in general population, it rises to 2- 8 % in infertile women and 5- 30 % amongst women with recurrent pregnancy loss.[2] Major renal anomalies are seen in 36 % of cases, most common being ipsilateral renal agenesis.[1] Vertebral anomalies are also seen as in our case.
A unicornuate uterus results from either arrest in development or defect in development of one of the Mullerian ducts. The European Society of Human Reproduction and Embryology (ESHRE) and the European Society for Gynecological Endoscopy (ESGE) [ESHRE/ ESGE] system classify this as type U4a.[2] In 75 % of cases, it is associated with rudimentary horn which is the result of incomplete development of one of the Mullerian duct and partial fusion with its counterpart. The rudimentary horn may or may not contain functional endometrium. The horn with functional endometrium is more prone to obstetric complications like spontaneous abortion, preterm labor, intrauterine growth restriction and rupture of horn.
Pregnancy in rudimentary horn is extremely rare because of the rarity of the underlying Mullerian anomaly itself. It is associated with higher maternal morbidity and perinatal mortality. It is difficult to diagnose prior to rupture and seldom progresses till term. The usual outcome is rupture of horn which occurs in 50 % of cases; of these, 80 % of cases rupture before third trimester.[3] However, there has been a case report of live term delivery in rudimentary horn.[4] It can be suspected on early pelvic examination, wherein a mass presenting outside the uterine angle (Baart de la Faille’s sign) or displacement of the uterine fundus to the contralateral side with rotation of the uterus causing elevation of the affected horn (Ruge Simon syndrome) can be found. Diagnosis by ultrasonography is highly operator dependent and is usually missed as in our case. Around 26 % of cases are diagnosed antenatally prior to rupture. Also the sensitivity of ultrasonography in diagnosing horn pregnancies decreases as pregnancy advances beyond first trimester, as seen in our case where sonography confused the clinician and diagnosed an abdominal pregnancy.[2] Diagnosis is usually confirmed by MRI.[5] Other modalities for diagnosis are CT scan and laparoscopy. HSG can help diagnose the anomaly in non pregnant state. Although neonatal survival rate in case of rudimentary horn pregnancy is only 11 %, early diagnosis before rupture can prevent maternal morbidity.[6]
Traditionally, ruptured rudimentary horn is managed by timely resuscitation, blood transfusion and surgical excision of rudimentary horn so as to prevent recurrence.[7] In early gestation, medical management by methotrexate followed by laparoscopic excision has also been tried.[8] Prior to pregnancy, excision of horn to prevent complications is also recommended. Though immediate surgery is recommended after the diagnosis even in unruptured cases, conservative management till viability of fetus has been tried in few selected cases provided that facilities for emergency surgery are available and patient is properly counseled. A case of pregnancy progressing till the third trimester delivered by cesarean section resulting in live birth has been documented. Induction of labour termination of pregnancy in a rudimentary horn should be avoided as it can lead to rupture of the horn. It is essential to avoid pregnancy for 1 year after surgical excision.[6] Patient is counseled regarding need for early antenatal registration and vigilant follow up in future pregnancy.

Diagnosis of the rudimentary horn during early pregnancy by clinical examination and imaging studies can lead to less morbidity and mortality to the mother. In subsequent pregnancy, the patient should be monitored vigilantly with early hospitalization; mode of delivery should depend on obstetric cause as there is no scar on the uterus.