Myomectomy is the process of removal of leiomyomas. In contrast to a hysterectomy it allows the uterus to be left in place and hence is a fertility preserving surgery. It is considered important that the endometrium is not opened during myomectomy, so as to avoid uterine rupture in a future pregnancy. We report a case where an open myomectomy was done for a large fundal and posterior, subserosal leiomyoma without opening the endometrium.

Uterine leiomyomas often develop in the anterior and posterior walls since the bulk of the myometrium is located in the anterior and posterior walls of the uterus.[1]   Leiomyomas can also be located at other locations. The incision on the uterus is generally such that the scar would lie on the anterior surface of the uterus.[2,3,4] Irrespective of the site of the uterine incision, it is considered important that the endometrium is not opened during myomectomy, because that increases the risk of uterine rupture in a future pregnancy. Here we describe a case of a myomectomy done large fundal and posterior uterine wall leiomyoma lying in close proximity to the posterior endometrium. It is presented mainly for the gross appearance of the endometrium after the dissection.

A 32-year-old woman, married for 7 years, para 1 living 1 abortion 1, came with complaints of polymenorrhagia for 7 months with cycles lasting 3 to 4 days every 15 to 20 days, associated with soakage of 4 pads per day and passage of clots. She had a history of dysmenorrhoea for 3 months and history of perceiving a mass per abdomen for 7 days  There was no history of any major medical or surgical illness in the past. She had a history of a lower segment cesarean section done 5 years ago, at the time of which she had received 2 units whole blood transfusion. There was no history of any bowel or urinary bladder related symptoms. Her clinical examination revealed a pulse of 96 beats per minute, blood pressure was 110/70 mm of Hg, and severe pallor. Abdominal examination showed a Pfannensteil scar and a 20 weeks’ size, firm, nontender mass arising from the pelvis. Per speculum examination showed normal findings, except that the cervix was drawn up. Bimanual pelvic examination showed the uterus enlarged to 20 weeks’ size, firm, globular. The lateral fornices were free. General and systemic examination revealed no abnormality. Her hemoglobin was 7.6 g/dl. Biochemical investigations for fitness for anesthesia showed normal results. Abdominopelvic ultrasonography showed uterine enlargement, with an intramural leiomyoma in the fundus and body of the uterus measuring 19.5x11.8x8.4 cm. The endometrium was distorted. Two units of packed cells were transfused. A laparotomy was performed. The anterior surface of the uterus was found to be directly adherent to the anterior abdominal wall at the scar site. These adhesions were released by sharp dissection. A large leiomyoma was found to be in the posterior wall of the uterus (figure 1). It was removed by Bonney’s hood operation. After enucleation of the leiomyoma, the endometrium was found bulging in the bed of the leiomyoma, giving rise to an “egg in a nest” appearance (figure 2). The bed of the leiomyoma was closed by interrupted sutures of No. 1 polyglactin, taking care not to injure the endometrium. The uterine incision was closed with sutures of No. 1-0 polyglactin as in Bonney’s hood operation. Estimated blood loss was about 650 ml. One unit blood transfusion was given. The patient made an uneventful recovery. 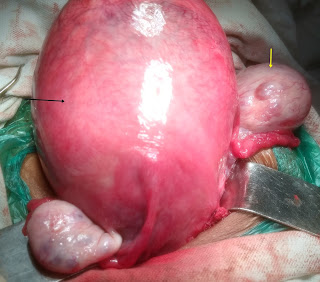 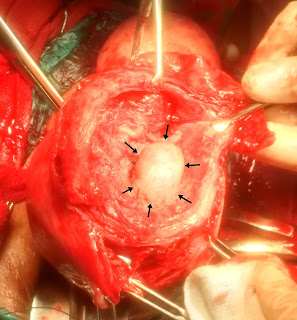 A posterior wall incision of the uterus uterus is generally avoided since the postoperative scar would be open to the peritoneal cavity and would form adhesions with bowel or omentum.[5,6]  An upper segment posterior uterine leiomyoma is usually managed by Bonney’s hood operation as was done in the above case.[7]  At the time of performing a myomectomy every attempt is made so as not to breach the endometrium. However in cases of leiomyomas lying in close proximity to the endometrium distorting the endometrium, it is quite likely to occur. Since there is no way of knowing exactly where the endometrium would be, extreme care needs to taken to identify it and avoid injuring it. This is important because any future pregnancy may be associated with risk of uterine rupture during pregnancy or labour in a patient with a prior history of myomectomy.[8] This case is presented mainly to show the appearance of the endometrium so that it can be identified by a gynecologist in training.